the pull of gravity

Jon Fitzgerald’s 1994 black-and-white film Apart from Hugh begins with a young man, Collin (David Merwin) sitting in a small village coffee house, apparently late in the evening, writing a letter. From the looks on his face and the accompanying score we know its a rather sad letter which, when finished, he folds up and puts into an envelope. That letter will, in fact, follow in this superficially likeable tale throughout, appearing next in a sketch book hidden away in one of the drawers of the country house in the Pacific Northwest where he lives with his lover Hugh (Steve Arnold), and eventually set out for Hugh to read two days later.

It is a letter, so we later discover that attempts to explain why, despite Collin’s love for Hugh, he feels he must leave their relationship, at least for a while, until he can explore more of life. Being several years younger than Hugh, who we gradually discover has toured Europe with a backpack, swam in the ocean alone in the middle of the night, and done numerous other things that Collin knows nothing about, the younger naturally feels a desire to discover some of these things for himself. 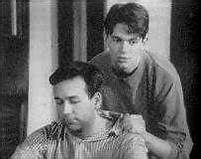 Their relationship is partially established the next morning as they wake up in bed together in a large brick building, apparently an old schoolhouse or apartment building, which inside their first floor rooms Hugh has decorated with numerous rugs, pillows, and knick-knacks enough that it looks to be quite comfy. Hugh has just had a “bizarre” dream: “I was back in high school...in my English class taking an exam in my underwear. The period was almost over and I couldn’t answer any of the questions. I was so frustrated. I got up and I walked over to the window, unlatched it and flung it open, and just totally flew out. Or was I sucked out? ...I flew over the city and the mountains and the forest. It was so beautiful! But it was so hard to fight the gravity.” Evidently, it is the kind of dream Hugh often has.

When asked about his own dreams, Collin says he never remembers them. “I always wake up and there’s nothing there. Just kind of a vague gray feeling, like dirty white socks. I guess it’s just lack of imagination. Not to be flying around like Superman all the time.” For Collin, Hugh has all the imagination, “always inventing, always wandering into buttercup meadows. Always wondering about all the ‘what-ifs.” For Collin, everything has to have its opposite, “rain/shine, dark/light, you/me.”

So we learn almost immediately that Collin feels a lack of experience and a paucity of wonderment, while his mentor, Hugh, is always questioning alternatives. Indeed, the dream Hugh has just had is not about him, we can guess, but about his own somewhat frustrated lover, who wants to escape the exam with which Hugh is constantly testing him: the examination of his own life.

We also quickly discern that despite the likeability of these two gay figures, they speak in a world of clichés, not only of “buttercup meadows” and notions of  everything having its opposite, but, as we soon discover, with lines such as “Love at first blight,” “You feel sexy when you grovel,” or interchanges such as:

Collin: “You know you’re something, you really are.”

Hugh:  “Is there something you’re not telling me?’

Collin:  “You know it’s funny how you can spend so much time with

someone. Do all sorts of criminal, crazy things with them, rely on

them so much. And then one day...poof...it all comes to a sad

There are so many of these periods of dialogue which are so badly performed by these two actors that we might almost imagine that we are watching an amateur play performed in this small rural community. Were it not for the obvious sincerity of this work and the appearance of thorough commitment to Fitzgerald’s play by Merwin and Arnold we might slip out the side entrance or more literally quietly take our earphones from our head and click off the DVD.

As with Hugh’s dream, the person who Collin is describing is not the one we might think, not Hugh with whom he is planning to end things, but Frieda, a woman with whom he lived previously who one day he simply left very much in the same way he’s planning to leave his current lover. It appears that our handsome young man has a history of leaving others in order to further discover himself; or perhaps he is just prone to seeking out strong personalities who help to mold his personality.

Fortunately for the viewer Frieda (Jennifer Reed) is a highly eccentric being, who has already arrived in town and headed over to the local bar, drinking several beers with a ridiculous British couple, playing pool (badly) with a couple of local yokels whom the lesbian bartender quickly challenges and beats, and hearing the sad tale of a cowboy who has just lost his male lover.

Hugh has invited Frieda up from the city (my guess is that the two lovers live near Bellingham since Hugh is described as attending the university) for a party that evening to celebrate his and Collin’s first anniversary. 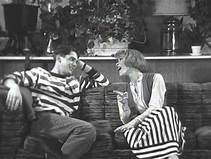 To give you an idea of just how wild Frieda is, Collin describes the time at a party when she served Oreo cookies, having removed all the white frosting and replaced it with horseradish!!

The Freida we meet, thank god, is much more entertaining, and now lives in a polyamorous relationship with a married couple who paint houses, happy with her sexual relations with both husband and wife. She, moreover, takes an immediate liking to Hugh, advising Collin, when he reveals his plans to her, to think carefully about leaving his new lover in a manner similar to the way as he previously left her. She understood why he had to leave, she reveals, but was nonetheless hurt for a long while.

The gay boys' party, which takes up a nice chuck of the film, is a carefully constructed exercise in representing diversity to which Hugh has invited local heterosexual couples, appealing gay men, two competitive heavyset drag queens, a black woman or two, and a poet who, after the group finishes playing charades, reads a Beat-inspired poem.

Collin is still determined to leave in the morning with Frieda with the intention of finding a life as rich as he believes Hugh’s has been. Actually, however, we realize that Collin probably has lived a much more adventuresome life with Freida than Hugh did in his vagabonding year, particularly after Hugh tries to remember the smells of France (bread and coffee beans), Holland (chrysanthemums and beer), or Norway (sweaty men and fish) which seems to suggest that the writer has never ventured out of his world atlas.

If, as a sentimentalist of sorts, I first might have wished Collin try to stick it out with Hugh, by the time of his and Frieda’s departure, with Hugh tucked safely away in bed, I truly hoped the boy might escape if not into a long trek across Europe or at least into a better script.

But the young Collin cannot, evidently, escape the force of gravity any better than Hugh describes feeling in his flights of fancy in the first lines of this film. He returns, scoops up the letter he has left upon the bookcase, and breaks eggs into the frying pan just in time for Hugh’s breakfast.