Now finally, through the work of The Bressan Project, led by Bressan’s sister Roe Bressan and filmmaker and film historian Jenni Olsson, we have two of those early films restored and made readily available, Passing Strangers (1974) and Forbidden Letters (1979), the latter filmed precisely during the period in which Bressan had also turned his talents to issues of gay liberation.

Or, perhaps, I still might have determined to discuss Passing Strangers because even in that first scene depicting heterosexual porn, there is so much else going on. While the pornhouse audience watches the couple fuck, Bressan’s camera pulls away to reveal the film itself slowly unreeling its images, suggesting that perhaps the image if of less importance or at least of equal importance with the idea of projecting such an image upon a screen. And soon after we move into the projection room itself where the projectionist, played by the director, is reading the Berkeley Barb classified “personal” ads. He immediately comes across one written by his friend Tom, who writes:

Passing Stranger you do not know how longingly I look upon

you, you must be he I was seeking, I have somewhere surely

lived a life of joy with you, you grew up with me, I ate with

you and slept with you, I think of you when I wake up all alone

The lines, of course, are recognizable as having been stolen from Walt Whitman’s “To a Stranger,”* an odd choice, so the projectionist friend of Tom’s feels for his rather sexually experienced friend to attempt to woo a sexual companion. With a sly insider joke, the projectionist suggests that it wouldn’t attract him since he is not very much interested in poetry. 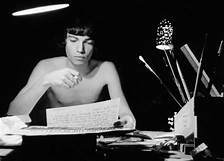 The person to whom the ad does appeal is young boy named Robert, who explains in the correspondence between the two over the next few days that he is still living at home with his parents, recognizing that he is gay but overwhelmed by and frightened of entering the gay scene. In short, although he is not precisely closeted, he is still not completely comfortable with his sexuality and even, as we soon after discover when Tom requests to see a picture of him, with his own body. Although the camera, and we as the leering voyeurs, have certainly approved of Robert’s lean young body, he still has a bit of acne, and Tom’s request for a photo results in a highly experimental few moments as the director overlays images upon the boy’s face as he peers into a mirror, alternately mugging and contorting the image he sees before him. Indeed, it is the question of his body and his need for approval that calls up the fantasy scene I describe above, where a group of order naked men suddenly appear to lovingly judge the youth who stands before them. 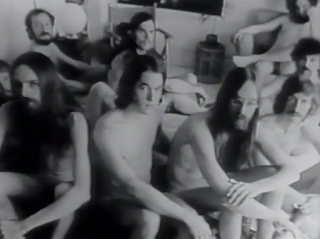 Fortunately, his fantasy judges seem to approve of what they see since they afterwards blow bubbles and leap up and down in gestures of apparent joy, a feeling which much of this work evokes.

Ultimately, the boy plays out a similar pattern by posing in various humorous and serious invocations of himself as the camera snaps shots in an automatic photo booth, pictures which he sends to his mysterious correspondent.

Moreover, once you have seen a figure actually complete a sexual act, you have an odd sense of familiarity with him, permitting you to engage with him as a true human being. It’s as if once you’ve seen someone naked engaged in such a private act, when he puts back on his clothes he is no longer a “passing stranger,” but a kind of friend, or at least a believable character. If this were truly a work of pornography, it would have ended with Robert’s spouting cock. But Bressan has already taken us further.

Touchingly, Robert also confesses that he is still awkward about his body in his physical education classes at school, terrorized that his sexuality might be uncovered if he gets an erection with other boys in the shower.

When Tom finally suggests a meeting time at Land’s End, Robert writes one of the most touching of his letters (letters all read, as most the film’s narrative is, by actors in voiceovers) in which he expresses that he is scared of actually meeting Tom. “I want to love someone but have never been outside my head about it. You know more about me than anyone else although we’ve never met. ...[but] I’m getting tired of being lonely.”

As we realize by this point, Bressan’s film is not at all satisfied with being a film that openly represents sexual intercourse. Rather, without denying any either the efficacy or voyeuristic power of pornography, he is just as interested in creating an amalgam of various methods of exploring gay love. Like Savel, you might also describe Bressan’s work as moving toward a deconstruction of the portrayal of gay sexual desire. One the hand, he seemingly argues that explicit gay sex has every right to be recognized as an entertainment which the viewer might enjoy and in which he might even participate, like those naked judges leering over the boy’s masturbatory actions. Yet Bressan has already brought up several other possibilities for how the subject might be approached.

Visual experimentation is certainly another possibility, as is the dream-like fantasy in which explores various reactions to how the body might be presented and perceived and what that means to the individual living inside its skin. These include a wide range of possibilities including gesture, hair, posture, and costume. 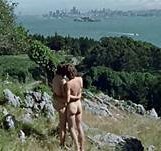 The director has also created a kind of ur-coming out story, long before the genre was fully developed in the late 1990s (my models again being Get Real and Edge of Seventeen) by creating a figure who at 18 is finally ready to encounter real beings at the other end of his fantasies.

The coming out genre, moroever, automatically requires a large dash of the romantic, since youth often cannot conjure up and deserve better than the harsher realities of love they will all too soon encounter. And Bressan certainly doesn’t disappoint, suddenly infusing his entire back-and-white palette with technicolor almost as if spoofing Dorothy’s observation that they are surely no longer in Kansas.

And most of the rest of the film, although also involving explicit sex, consists of a true romance between the younger boy and slightly older man as they race along the shore, fly a kite, and, mostly in the nude, simply frolic through the woods and empty landscape of Land’s End, followed by a lark of a trip by bicycle through downtown San Francisco that can only remind one of an US picture playing out of the tropes of the French New Wave, particularly as expressed in  François Truffaut’s Jules and Jim (1962). 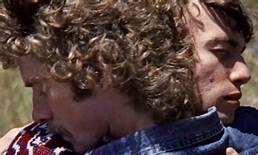 A great portion of these scenes represent the silly high-jinks of the San Francisco hippie days. And since Bressan could obviously not afford the sophisticated lighting available to someone like Savel, much of Passing Stranger’s color scenes are presented in the washed out browns and yellows of far too many 1970 cinema movies. Finally, except for what is clearly a gloriously beautiful day of  experiencing the joy of being with someone with whom you feel the sensation of falling in love, Bressan doesn’t have much to say that might allow his film to soar into the pantheon of great filmmaking. Yet I’d argue that as a romantic filmmaker of gay love there are few who match this director’s breathtakingly tender tale. I don’t think I ever before saw a work—particularly given that this film begins with the harsh gritty old-fashioned downright “dirtyness” of porno movies—that expresses just how truly innocently pure is the portrayal of nude bodies engaged in sex. If Bressan can’t convince you that good-looking bodies fucking one another aren’t one of the natural wonders of the world, you better immediately skitter back to Bible class and read out your Chronicles as quickly and breathlessly as you can. In a time when you could safely fuck without a condom, you could skip what “begat” and get down to pure pleasure!

Since the restoration has just appeared, there hasn’t been much time for critics to fully assimilate just how remarkable Bressan’s strange inter-genre work is. But after writing the above I was happy to find my feelings confirmed in large by critic Caden Mark Gardner who wrote in his 2019 essay on Bressan: “Passing Strangers is at its heart a completely true to life romance—I would argue one of the best of its kind in queer cinema—and coming-of-age romance while also being a pornographic film, refusing rigid categorization and embracing all of what it is.”

And in the end this work becomes even more, as Bressan winds out their glorious day in the sun with the two taking in an early gay pride day parade. Compared with events in later years, there are only a rather meager handful of individuals participating in this parade, but unlike today’s events in which the watching crowds swell again the organized representatives of various sexual and political coalitions march and ride upon floats, everyone in this parade seemed to be participating, marching with other lesbian, gay, bisexual, transvestite, transexual, questioning, and alternatively gendered individuals simply to declare their own existence. By film’s end the voyeur has become the active advocate.

Tears can only well up in our eyes when we realize that the harsher reality Bressan hid from the young Robert on this very special day, would end up killing the director when he died of AIDS in 1987.

*It might be interesting to compare Whitman’s actual poem with the words lifted from it by Bressan’s character. Whitman’s work is at once more general, including both males and females, and yet more deeply personal and even sexually suggestive in the lines, “All is recall’d as we flit by each other, fluid, affectionate, chase, matured.” Whitman’s work is also a kind of fantasy, a dream of sorts, whereas Tom’s version is call out for someone who might wish to join him in their “coming together,” which in Whitman is described as simply being the role of the poet, obviously through evoking the images through the poem itself.

Passing stranger! you do not know how longingly I look upon you,

I have somewhere surely lived a life of joy with you,

All is recall’d as we flit by each other, fluid, affectionate, chaste, matured,

You grew up with me, were a boy with me or a girl with me,

I ate with you and slept with you, your body has become not yours only nor left my body mine only,

You give me the pleasure of your eyes, face, flesh, as we pass, you take of my beard, breast, hands, in return,

I am not to speak to you, I am to think of you when I sit alone or wake at night alone,

I am to wait, I do not doubt I am to meet you again,

I am to see to it that I do not lose you.


Posted by greenintegerblog at 9:18 AM