maybe i loved him

P. David Ebersole’s 1994 MFA Thesis film at New York University straddles two LGBTQ film genres, a head-on campy satire—in this case of Thomas Mann’s novella Death in Venice and Luchino Visconti’s 1971 cinematic treatment of it—and a tragic coming out tale in the Southern gothic tradition relocated to the long strand of  the Venice, California beach. The closest to the latter in genre, I’d argue, is James Bolton’s Dream Boy of 2018.

This, quite obviously, is Tennessee Williams territory, and in recognition of that fact director Ebersole brilliantly cast Shirley Knight, who performed in Williams’ A Lovely Sunday for Creve Coeur (1979) and in the film version of  Sweet Bird of Youth (1962) to oversee the dramatic encounters of his central characters. I saw Knight in in the 2012 New York production of Williams’ last play Masks Outrageous and Austere in which, as Clarissa “Babe” Foxworth, she performed a similar position. 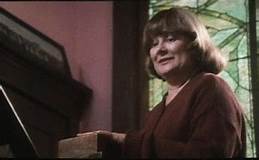 It’s too bad, given the link she provides to Ebersole’s obvious influences that she doesn’t have a larger role. Yet, as Mona Dickens—the owner and guardian of the decaying, gothic-like boarding house in which the Gustav von Aschenbach-like figure Mason Carver (Nick Rafter) takes up residence and in which lives her step-son Sebastian (the name with which she has dubbed the 17-year-old John [Robert Glen Keith] that also references Williams)—she hovers over the work with monstrous effect.

The difference is that Williams was able to graft these opposing genres together to create a hot-house like magnolia whose scent wafted throughout the theater so powerfully that his audiences lost their rational facilities as if they had smoked a dozen reefers before sitting down to watch his plays. Williams took camp to new levels by grounding it in the seemingly realist tradition of the Southern melodrama that broke our hearts through its pathos of lost lives and loves. Williams’ plays are comedies at which instead of laughing you’re forced to cry, cutting away that transitional arc between, as the cliche puts it, “I laughed so hard it brought tears to my eyes.” Williams proved Bergson was right, there is a thin line between the comic and the tragic, between the pleasure of laughter and the suffering of fury.

Alas, Ebersole is not quite sure, it appears, whether he really intends his Venice, California transposition of Death in Venice to be a comic or a serious work. Ludicrously, his von Aschenbach doppelgänger, Carver arrives with his suitcases and ill-fitting suit on Venice beach as if he has magically been flown in, just before the camera started rolling, from a Long Beach dock. And, as he passes the famed Venice Beach Weight Pen (now enlarged into Muscle Beach), we immediately know he’s doomed when he catches the eye and knowing smirk of the hunky young Sebastian working out with his musclebound friends.

Certainly Ebersole could not have chosen a better place than Venice to create a sense of a pending choleric epidemic. In its unending mix of a carney atmosphere where men and women freaks swallow blazing shish kabob skewers and juggle fully-operating electric hand saws along with its endless maze of cheap souvenir and T-shirt shops, Venice is a sleazy tourist’s delight. And the men’s bathrooms, which the film features, are truly foul-smelling refuges for homeless men, time-worn surfers, and gays seeking sexual liaisons—at least at the time when this film was made. Since then, much of that has been cleared away, but I recall back in 1985 or 1986, shortly after having moved to Los Angeles, driving to a Venice parking lot and breaking down in tears while the radio was playing Billy Joel’s “New York State of Mind.” Although I had already come to love Los Angeles, I so hated Venice that I despised even visiting it, occasioned on that morning I presume by a visit to the local boardwalk bookstore, Small World Books.

Yet given all the noise and apparent contagion about the place, I cannot imagine even a derelict house remaining on the boardwalk, let alone run by a germophobic landlord such as Knight’s character, who keeps the windows locked tight. Early in the film, “dropping beads” (see my essay about the process) to the new tenant in the bedroom across from his, Sebastian complains that his step-mother has got the place “shut up like a coffin” so that “Come summer I’m going to have to sleep naked outside the covers.” While I am sure that Carver went to bed that night with plenty of  lustful thoughts, because of the sea breezes Venice is often cold in the nights, so that he might find the nude beauty shivering instead of sweating. 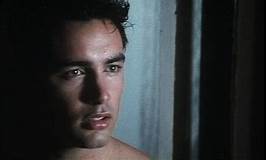 Oh well, we get the point, as does Carver, his eyes growing so wide that by the time, a few days later, when the half-naked Sebastian drops into his room again, pulling the man’s hand to his chest for a quick stroke of his pectorals—before Mona knowingly hoots out “What are you boys doing in there?”—we are sure that the elder man is ready to fall into a faint with what he describes as his “stress.” For a man who has evidently been stalking boys now for a great many years, he should know, as his voiceover epistles seem to indicate, that the ”pollution within his body” is not ever going to be put to rest by his doctor’s pills.

So far Ebersole has spun out a kind of campy version of an extremely closeted fuddy-duddy finding a delightful torment in his longing for a young man’s body. Yet when the film begins to get down to its semi-realist foundations, we simply can’t believe it at the very same moment we have just begun to be intrigued by Carver’s rather absurd dilemma.

How could this art historian who sees himself as an authority of Romantic love, have ever agreed to be holed up in such a Venice dump? Ebersole’s attempt to cover the implausible situation by suggesting that Carver’s wife is Mona’s sister, making him Sebastian’s step-uncle just doesn’t resolve the riddle.

And even had Mona resided in a smart Venice rehab why would he choose Venice as his Los Angeles “home-base”? Although we soon see him, on a day in which Sebastian has been charged to show him around the Venice environs, in a museum,  anyone having come to the city with the intent of museum-going or doing of research would know that there are no museums in Venice (although there is the splendid contemporary art gallery LA Louver) in which you might find a painting of St. Sebastian, which he lovingly describes to his namesake. Such a work might be studied only in the Getty Museum in Malibu (the Getty Center had not yet been completed at the time of this film) or the Los Angeles County Museum of Art*—both miles away from Venice.

And why, for god’s sake, does Carver daily dress up in a suit each morning when no one else in Los Angeles does except for museum directors and a few businessmen working in downtown offices? As a native Angeleno Ebersole certainly knows better.

Even if we were to ignore these minor details, however (recognizing that in the movies accuracy is a rare commodity) or to accept them for part of satiric absurdity, we still have major problems in simply believing in the characters Ebersole is trying to create as his satiric targets. This is certainly the first LGBTQ film that I’ve seen to date (and admittedly I have hundreds still to view) where the youth in a “coming out” film not only is more aware of his sexuality than any adult the movie portrays, but is lasciviously involved with the gay sexual world. He admits he’s been knifed by a leather number he tried to pick-up in a Venice bathroom and when he goes missing, Carver immediately goes to look for him and finds the boy trolling in the then infamous Venice toilet. When Carver describes himself as being an authority on Romantic love, he means he is a scholar of the attitudes the 19th Century Romantics held about love. But when Sebastian claims “I am too,” he means just that; he’s a firsthand authority about gay sex and where to find it. 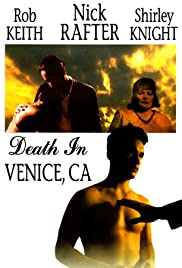 Accordingly, whatever does Sebastian see in Carver, an exhausted and confused, if admittedly a somewhat handsome, elder who hasn’t yet and probably will never be able to come out of the  closet? Even if we grant that the lad may have a father complex—Mr. Dickens, as Mona describes him, was probably a gay man who nightly haunted the bridges of the Venice canals—it simply doesn’t explain why the kid spends so much time trying to seduce the elder boarder. And even when he finally succeeds in getting the gentleman caller into bed—at Santa Monica’s Shangri-La Hotel, now a popular place where our artist friend Robert Longo always stayed when he was in town—the savvy 17-year old must realize he’s never going to convince the codger to leave his wife and run away with him.

Finally, when the sexually cowardly Carver finally turns tail, ready to run back to his wife, why would such an experienced gay boy decide to hang himself under the Venice beach pier pilings (incidentally, there is no pier that I know of in Venice, and I’ve never seen these pilings unless they’re under the Venice Beach parking lot). It just doesn’t ring true.

If he’s finally resolved to leave his lustful ways behind him, why also does Carver seek out Sebastian, now known as John, under those darkly-lit pilings? Just for one last kiss? Maybe one more blow job?

Most importantly, if this 30-some minute film was meant to be a satire, why are we suddenly faced with an ending that proffers a serious enough offense that the police are easily convinced that Carver has killed the kid, locking the innocent sinner in prison for the rest of his life. The film’s early humor and even its several beautifully composed scenes and images are suddenly reduced to a spiritually-based psycho-babble: “Maybe I loved him. I certainly was a victim of that romantic possibility. But a man has the right to live a life in which he sidesteps persecution.  I have one hope for salvation. A chance to begin again. To die. And to be reborn a braver soul than I left.”

At least von Aschenbach kept quiet about it all!

I hate to say this, since I kind of liked Carver and hoped that he might find a way to enjoy the sex he longed for, but even if he’s totally innocent, I’d now argue “lock him up.” Besides, he’s been locked up for his entire life already.

*The LA County Museum of Art does hold Delacroix’s St. Sebastian Helped by Holy Women, but the painting we see in the film looks something like the 17th century Baroque master Guercino’s St. Sebastian held by the Pushkin Museum in Moscow.

Posted by greenintegerblog at 8:59 AM