Long thought to be a lost film, Curtis Harrington’s 8-minute color, wordless short The Assignation (1953), was rediscovered and is now available on the DVD The Curtis Harrington Short Film Collection.

It’s an elegant one-liner that nonetheless sends a few shivers down one’s spine. Indeed, one might almost describe this as Harrington’s final “coming out” film, a true saying goodbye to what I have come to describe as the C-1 variant of coming out works (by Kenneth Anger, Willard Maas, Gregory Markoupolos, John Schmitz and others) dominated by the central sexually conflicted character’s attempts to dissociate himself from the female figure.

The film begins with an awaiting gondola into which soon settles a presumably male figure dressed in the traditional Venice carnival attire (see Jean-Daniel Cadiot’s gay pornographic film Le voyage a Venise of 1986 for a fuller rendition of these costumes) of a Bauta, a white mask with a pointed  nose, and a long black cape, as he holds in front of him a slightly wilted rose. 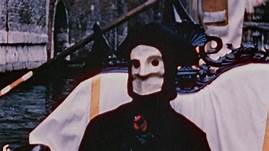 The heart of this film is the quiet rowing of the long boat through the maze of canals of Venice as the masked carnival celebrant, sitting rather erect, glides through Venice in a gondola manned by two gondoliers, one of them particularly handsome, the camera focusing on him from time to time.

The sounds we hear and the images we witness are almost all from the viewpoint the man sitting deep within the vessel, with the homes and businesses seemingly shuttered from the canal side. Every once in a while, however, the camera shifts to a head-on view of the traveler, as we gradually perceive that his rose, contrary to what one might expect, seems to be reviving, becoming more erect and sturdier as it moves through the breezy canals under the gentle plash of the rowing oar. Along the way we observe several famous Venice sites such as the Campanile di San Giorgio Maggiore.

Finally, the gondola stops and the costumed figure steps out and moves into a small courtyard. We see a woman high up sitting in a window smoking a cigarette. Seeing the man waiting below, she leaves the window and soon after begins slowly to descend the staircase, walking almost like a sleepwalker toward him. When she stands directly in front of him, the camera focuses on the single rose he has carried throughout the long voyage, whose petals suddenly drop off into a small pile at her feet.

The duo stand looking at each other for a moment before the man gathers his long black cape and envelops her within it, obviously signifying her imminent death.

Both the fallen rose petals and the deathly embrace intimate the director’s farewell to the female sex.

Posted by greenintegerblog at 4:55 AM