a terrible beauty is born

I was delighted to celebrate this Easter by watching my friends’ Felix Bernstein’s and Gabe Rubin’s special invitation into their Toad and Frog house, normal in some senses, with a couch upon which the Frog loves to stretch out and read the newspaper, along with a couple of chairs and a rug. Yet also containing a kind of fairy child playing in the corner, a piano with an accompanist in another, and the arrival of a Fairy Queen bearing a special Easter Egg gift for the couple indicated this was a somewhat queer abode.

Perhaps one should begin by asking the necessary question: “What is the difference between a frog and a toad?” Both are tailless amphibians belonging to the order Anura. Although the skin of frogs is generally moist and smooth since the frog lives in and near water, while the toad’s skin is generally dry, rough, and bumpy, the animal found far away from a stream or pond, there are numerous exceptions in both cases. The frog’s back legs are usually longer, but that too varies in several instances. In fact there is no taxonomic basis for the labels. All toads are actually also frogs and differences between the two are superficial. The two beasts are basically interchangeable, beloved most by young boys and young boys at heart.* 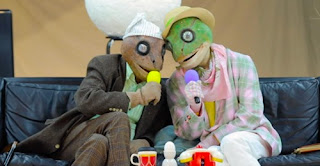 The parallel might be applied to the actors who play these two Anurans: Rubin is transgender while Bernstein is gay. They work together as art partners. In short, their differences are superficial. But it is unlikely that together they might produce an egg inside of which a stuffed baby Easter Bunny is about to hatch.

What becomes clear as we make our way through this charming film—that one can only describe as a zany mix of the Dame Edna Christmas specials and the Jerry Lewis Labor Day telethons, imbued with the everyday sense of neighborliness of Mister Rogers, with a pichon of Charles Ludlam’s camp—is the absolutely remarkable talent of the two central figures.

The Toad and Frog both referring several times back to their tadpole days in Ohio, together sing a lovely version, with mostly new lyrics of the Leonard Bernstein, Betty Comden, and Adolph Green loving whiner, “Ohio” from the musical Wonderful Town.** And a bit later Bernstein tackles one of the most difficult of lyric tenor ballads, Billy’s “Soliloquy” sung at the end of Act I of Richard Rodgers’ and Oscar Hammerstein’s Carousel, this with almost entirely new lyrics as he ponders first a male and then a female tadpole eventually hatching from the gifted egg. His performance was truly of Broadway quality, and in a year of closed New York theater due to the epidemic carved out a special hallow of Broadway musical remembrance. I almost cried.

And then, unexpectedly, were their lovely British accents peppered with the words of Polari thrown in their conversation like an exotic gay spice. (See my essay on the short film in Polari Putting on the Dish from 2015.) Bernstein also wrote me that he picked up the accent a bit from listening to Anthony Newley, best known for Stop the World—I Want to Get Off  (1966).

Like most such holiday celebrations, this definitely un-Hallmark special, also featured several drop-ins from artist friends celebrating the holiday and the imminent birth of whatever was hiding in the magic egg. 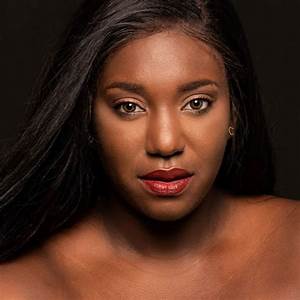 Avant-garde improvisor Shelley Hirsch stops by as Mitzi Gershwin who belts out a loud and off-key celebratory ballad for the day. Opera singer Samantha Burke drops in to sing a stunningly beautiful Russian song. Poet/critic/artist/performer Wayne Kostenbaum sends a short selection of art works to be viewed and sings a couple of his witty ditties that take his listeners on rather loopy narrative voyages that end in somewhat emphatically illogical yet loveable conclusions. New Yorker writer and journalist Stephanie La Cava drops by to demonstrate how to make her absolutely dreadful looking “Peeps Soup Microwave” (Peeps tossed on marshmallows melted in the oven). (There’s a Sexy Frog Peeps Soup rap-like song on YouTube, but it’s not the same thing.) 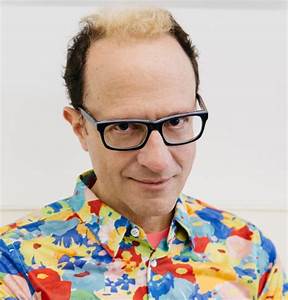 I have never much liked family Easter get-togethers since as the eldest of numerous cousins, I was always too old to participate in the childrens’ Easter Egg hunts, and too young to share in the elders’ inane niceties that pretended to be adult conversation.

But this Easter was a joyous occasion watching Bernstein and Rubin’s wacky holiday tribute to a holiday that had little to do with their own upbringing. One hundred and five years earlier W. B. Yeats had written in his poem “Easter, 1916”:

I have passed with a nod of the heard

Or have lingered awhile and said

And thought before I had done

Of a mocking tale or a gibe

To please a companion

Around the fire at the club,

Being certain that they and I

But lived where motley is worn:

A terrible beauty is born.

“A terrible beauty” indeed was born in this delightfully crazy intercession, and it’s name was sweet laughter. Bona giddie-up.

**This skit was also influenced slightly by the popular Frog and Toad children’s tales by Arnold Lobel. In that series the same-sex Toad and Frog join in a number of adventures and activities. Loebl’s daughter argues that “the Frog and Toad was the beginning of him ‘coming out.’”

**I might have accidentally introduced Bernstein to this song. In 2003, when I was scheduled to fly out to New York City with a ticket in hand for a revival of Wonderful Town the city was hit by a fierce snowstorm which forced me to cancel my trip. I made a quick call to the Bernstein household and to the theater itself, transferring my ticket to Felix, who attended the performance in my place. Bernstein also reminds me that when he was much younger I sang the lyrics to that song from his "reading lyrics" book, something I had entirely forgotten.

Posted by greenintegerblog at 12:18 PM