youth in a hurry

When I was a Freshman in high school I played a small role, probably one of the dead souls in the Grover’s Corners cemetery, in Thornton Wilder’s Our Town. I remember the play well, but I recall only small bits and pieces of our rehearsals and our final production. What I do remember is the adolescent tittering of most of the cast members when Mrs. Webb, observing that her sun was about to leave the house, was asked by the script to shout out: “George, don’t forget your rubbers!”

I should imagine I remember their silly giggling because I didn’t quite comprehend why there were laughing. A mother had simply reminded her son that since it might rain that he should wear his galoshes. I never had never owned a pair of galoshes, and I had no idea that a rubber was how most people described a prophylactic, but then I didn’t know either what a prophylactic was and why you should wear one. I was so innocent for so long after that I can now finally admit that even today I never have once actually used a rubber, even during the years before my relationship with my now husband Howard—this despite the fact that for two or three years in the late 1960s I had regular sex with different partners almost every night, and that even after I met Howard I had sex outside our relationship for several years. Like so many young people of the time I lived out my youth in a hurry, unable to conceive that I might need more carefully to protect it. Miraculously, I somehow survived without contacting AIDS.

I repeat this almost forgotten incident because the other night, after watching Dans la décapotable (Burn Rubber), a short film directed by Merzak Allouache as part of the French TV series from 1996, I realized that Mrs. Webb’s long ago admonishment to her son to not leave to house without rubbers, applies directly to the central character’s situation. The front downstairs buzzer is ringing as a handsome young man, Axel (Julien Lambroschini) is packing up for a trip. It rings again and again as he hurries to pack up his toiletries and the rest of his clothing. Finally frustrated by the endless ringing, he zips up his bag and rushes downstairs to meet his friend Marc (Guillaume Depardieu). Axel suddenly reports that he’s forgotten something, determining to go back, but Marc refuses since, he argues, they have to beat the rush hour traffic. 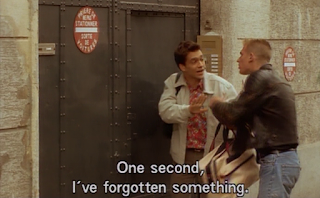 Axel is pissed but also irritated as the two begin to drive through Paris, Marc, obviously his boyfriend, attending particularly to every young beautiful woman they encounter along the way. It appears that he is either very flighty in his attentions or is simply attempting to get a rise from Axel, who increasingly grows irritable and disgusted by Marc’s immature actions.

It quickly becomes apparent that the two are on their way to a weekend or perhaps weeklong retreat, mostly to enjoy one another’s company, and that what Marc has forgotten is his condoms.

In a series of works mostly dedicated to love in the time of AIDS, hence the title Love Reinvented, Allouache’s work, the 10th of the 12 films to be aired, picks up the major theme of the sixth episode, Pierre Salvadori’s Un moment.... (see my review above). In this case, however, Axel is far more serious about his responsibility to maintain safe sex than the character in Salvadori’s movie, particularly as it becomes increasingly clear as they make their way across the city that Marc is carefree and rather irresponsible.

At one point for example, he asks Axel to retrieve a cassette in the glove compartment. When Axel does so, he discovers a number of rubbers stuffed into the plastic case, and for a second seems relieved, but the very next moment Marc, taking the cassette in hand, declares, “oh I must have left these there when I bought the car three years ago,” and tosses the plastic case out the window.

Axel is furious, demanding his friend stop the car, even though they are now on the freeway, determined to get out to recover the discarded item. But Marc insists it’s impossible and dangerous to stop of the freeway. “What do you think I’m crazy?” he asks, pulling down the visor to display a large set of condoms attached.

So this one-liner film ends, Marc not having forgotten his rubbers. The two kiss as the car speeds up, the lovers headed to a wonderful weekend of sexual bliss.

Posted by greenintegerblog at 5:46 AM