One of the most innovative and visually stunning short films of the early 2000s, New Zealand director Welby Ings’ Boy (2004) is a work without dialogue that tells its story through its arresting images and words printed on those images. The printed word has great significance for professional art designer Ings, who himself didn’t learn to read until age 15.

The short textual matter imbues the film with a poetic quality while also representing the voices of the town’s citizens like a chorus who shout out derogatory words to the film’s young hero, such as “pussyboy,” “fag,” “rent boy,” “prostitute,” “slut,” etc.

“Written words as thoughts, comment on or interrupt developments in the film as fragmented or poetic text. The language in this text is either poetic or references the little known New Zealand bog cruising sub-cultural language of bogspeak or parley.”

The words, although crucial to the inner feelings of the characters, are themselves not as important, however, as the photographic-like frames of the film, reminding one of the photography of Diane Arbus and harkening back to the doll obsessions of artist and photographer Hans Bellmer. The former Arbus-like images catch the odd strangeness of the seemingly “normal” figures of Ings’ small New Zealand town in which the “story” takes place; while the latter Bellmer obsessions, broken dolls uncovered in an old factory, restored, and outfitted (sometimes like the villages residents) as angels—visions of the villagers’ inner beings—along with one horrifying redeeming angel with black wings, all artifices created by the young hero of the piece, Sam (Jesse Lee). 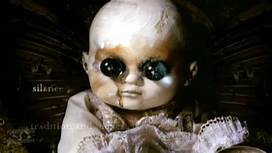 The narrative is basically a one-line incident, a man (Bryan Bevege) driving the empty roads outside of a small New Zealand town, distracted by his cellphone, accidentally strikes a young female walking alongside the highway. He stops the car to check on the body, discovering that the girl is dead; but instead of calling the police, he drives off, turning the accident into a case of hit and run. 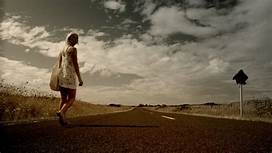 Meanwhile, the local male rent boy, the peroxide-haired high school student who lives with his grandmother is visiting the town’s public restroom where he picks up most of his tricks. When someone enters the cubicle next to his, he peeps through the glory hole only to glimpse the driver, a local man he recognizes, washing off his hands in the toilet having taken off his blood-stained suit jacket and wrapped it around the base of the toilet bowl. To get a better look at these strange goings-on, Sam crawls up to peer over the top of the cubicle wall, his stare returned by the driver, who quickly exits, leaving behind his suit jacket.

The moment he leaves, the boy rushes in to scoop up the coat in the pocket of which is a bloody piece of the girl’s garment and several of the driver’s credit cards. 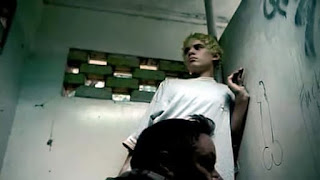 The body is found by the police, the local newspaper reporting the event as a hit-and-run by someone who perhaps doesn’t even live in the town. But others suspect foul play from someone in their midst, including the driver’s wife (Amanda Macek) who reports to the local police chief that she has found blood on her husband’s shirt.

Although he is now possibly a suspect, the driver is still not arrested, and follows Sam, bicycling with a little cart hooked behind the bike as the boy makes his way through town—the upright citizens of this scuzzy village all observing him with distrust and disdain—to the shut-down factory, the driver entering while Sam hides, the man shouting out that if he ever finds him he’ll kill him.

At school several fellow classmates, male and female, mock him and when Sam goes to his school locker he discovers it has been spray-painted pink.

In another such instance when the boys suit up for gym practice the driver’s son (Luke Thompson) and other boys attack and beat Sam. All, obviously, are veiled threats aimed at assuring the fact that he will never talk about what he has witnessed, the father perhaps having encouraged his son’s homophobia with revealing the reason behind it.

Sam has long grown used to it all, and witnesses most of the townies’ stares of hatred by recognizing some of them in his head as his regular customers which the narrative reveals by suddenly showing them in pink tutus and bras—a stereotype which I wish Ings might have avoided, but which obviously represents their hypocrisy.

Yet Sam has also clearly been hurt by the small-town bigotry, the film twice showing him encountering his younger self to reassure him as Ings introduces the film’s major vocal musical number, “Anchor Me,” the 1994 song recorded by the New Zealand rock musical group The Mutton Birds:

Anchor me, anchor me

As the compass turns

And the glass it falls

Where the storm clouds roll

And the gulls they call

The first time Sam is clearly reassuring the uncertainty in himself in his meeting with the child.

But soon after we witnesses the local hotel bar woman being raped by several of the town locals. She is the resident heterosexual prostitute and their brutal treatment of her is so similar to the abuse they heap upon him that he pulls out his avenging angel with black wings, and in his imagination meets up once again with his younger self who this time passes the coat he has given him back to the elder self who takes the evidence directly to the police, credit cards still in the pocket to identify the roadside murderer.

Ings’ 15-minute short was shown internationally in LGBTQ festivals, winning awards. Since then he has made two further short films Munted (2011) and Sparrow (2016), and in 2020 released his first feature film, Punch, not yet available in the US.

Reprinted from My Queer Cinema blog and World Cinema Review (2021).

Posted by greenintegerblog at 8:54 AM