under the influence of a comet

Alice Guy Blaché was one of the most noted directors, and the only known woman filmmaker, of early silent films. After working for several years at Gaumont studios, doing a large number of remarkable films, many of them feminist in nature as well as demonstrating her fascination with gender reversals and cross-dressing. 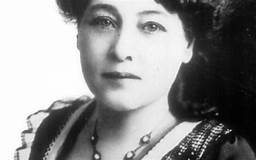 In 1907 Guy moved from France to the United States, and three years later, with her husband Herbert Blaché and George A. Magie, Guy founded the Solax Company, which moved into a then state-of-the-art studio in Fort Lee, New Jersey. The facility was said to have cost $100,000.

Despite her creative talents and business acumen, however, the studio began to run into financial difficulties as much of the burgeoning US film industry moved west toward Los Angeles, turning away from the shorts she was producing to create feature films. In 1913 Guy’s husband took control of Solax, and throughout the period from 1915-1920 he and Alice worked on various features for hire.

In 1918 Herbert abandoned his wife and family for an actress, ending in Guy divorcing him in 1920 and returning with her children to France. Unable to find work, she returned to the United States only to find that she was now shut out of the film industry she had helped to create with the production of nearly 1,000 short and feature films.

A great many of her films are now lost, including Year 2000 which I mention above. Several of her shorts have been collected and reissued on DVD in Kino Classics 2-volume set, Alice Guy Blaché: The Gaumont Years and The Solax Years.

Among the many of her films that have LGBTQ connections was the Solax-produced Cupid and the Comet (1911). The film exists in a restored version at Filmmuseum München in Munich Germany, but with two important resources lacking, budget and a body that permits easy travel, I cannot visit Munich to view it.

What I describe below, accordingly, is a summary obtained from other sources, and I obviously can make no new insights about its relevance to LGBTQ issues without seeing it. But with its pairing of daughter and father cross-dressers and the gay priest’s marriage of the two boys, it certainly appears to be one of the most advanced visions of gay sexuality of the period.

To celebrate the passing of Haley’s comet, an amateur astronomist attends a festive celebration. However, during his viewing of the group telescope, he discovers his daughter in the arms of a strange young man.

He immediately breaks up the pair, brutally dragging his daughter home by her hair. But the young man returns to serenade the daughter from the garden below. At one point he attempts to climb up to her window, but the father reappears, again breaking up their would-be romance.

Determined to keep the young couple apart, the father banishes his daughter to bed and, to be certain she not again attempt an escape, he steals her clothes taking them with him into his own bed.

Just as insistent in eloping with her lover, the young girl steals what apparently are her father’s only set of clothes, and dressing in them, sneaks off with her young man to be married. The couple visit the house of a highly effeminate priest who is understandably is wary about marrying two “boys,” but finally agrees to do so.

The father, meanwhile, discovering his daughter’s absence, is forced to dress up in his daughter’s apparel to go on the chase of the missing couple. When he arrives at the priest’s house, just after the ceremony has been performed, he is lectured by the priest both for his rage and his very strange dressing habits.

Posted by greenintegerblog at 6:19 AM