Ever since American-born Israeli director Eytan Fox’s first film After (a.k.a. Time Off) of 1990 he has become one of he leading international figures in LGBTQ filmmaking, producing 7 short and feature films and 4 television productions, often working with his long-time partner Gal Uchovsky.

Today his voice is particularly an important one given his long-standing discussions of the Israeli-Palestinian conflicts and his focus in The Bubble (2006) on a gay love affair between a young Israeli and a Palestinian homosexual. Some of his films, including After also feature issues surrounding the Israeli mandatory military service, for which Fox also served.

After begins in media res with soldiers on guard as others in their tents try to catch a few moments of sleep before their Lieutenant arrives to order them into yet another seemingly meaningless exercise. And once again Yonathan Miller (Hanoch Re'im) is late for the change of guard duty.

In fact, a few moments after the film begins Lieutenant Erez (Gil Frank) does arrive by jeep demanding that the entire encampment be moved from the bottom of a hill to the top of it in 7  minutes. Chaos ensues as they scatter to clear up their tents, untether them, and race up the hill to replant them in the new soil. Miller grabs his guitar and follows. 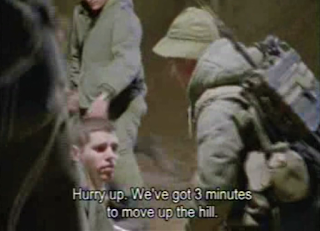 As they struggle to complete the task Miller and his friend Mali (Tzufit Grant) grumble that even duty in Lebanon—where Israel had sent troops at this time—was better that where they were at the moment. Fortunately, they agree, new recruits are not sent to Lebanon.

When the group fails to successfully repost their tents the Lieutenant commands them to return back to their starting point at the bottom of the hill.

Soon after the Lieutenant has the entire unit laid out on their backs as he describes what are evidently-mind control tactics as, with eyes closed, they are commanded to imagine sweat rolling down their backs and sticking to their bodies, before finally being able to wash their bodies clear. One by one, with their eyes still closed, Erez gently kicks soldier after soldier to stand and move into line position as he leaves Miller to suffer the mind-control experiences alone, finally giving the “Attention!” command which forces Miller to open his eyes and realize that he is being observed by the rest of the unit who laugh at his embarrassment. He feels that, inexplicably, Lieutenant Erez has a particular grievance against him.

At another moment, Erez encounters Miller taking a shower on off hours, the few in which he permitted sleep, and, having interrupted Miller’s peaceful moments alone, it involves a tense show-down between the two, in which the Lieutenant even reprimands him for not having properly dried his body.

And what does it mean that Erez wears a small, almost unnoticeable earring?

It soon matters little, as the unit is ordered to board a bus on route to Jerusalem, Miller’s home city (just as it was the director’s) where they will be allowed one day of leave before being deployed, apparently—they guess correctly—to Lebanon.

In the bus, simple statements and grievances turn into anger as those from various rural areas of Israel pit off against the city boys from Jerusalem and Tel Aviv, the latter of whom are for more open-minded about “the Arabs” than their country cousins. In order to calm emotions down, Erez orders Miller to play his guitar, which he does, cooling the ire of both sides with a beautiful song of the sea, with which they all join in with the choruses. 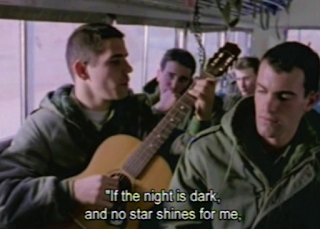 If Miller appears to be an irritant to Erez, he is clearly popular with the others. And when they get to Jerusalem, a group of the more conservative “country” boys encourage him to join them on their search for girls, for of whom they discover in a local bakery shop to where Miller leads them, they demanding to have a few good pastries before returning to military grub. There they discover four American girls, lightly satirized by Fox in their attempts to pick up the all too eager military boys.

Once more the other boys encourage Miller to join them on their one day “on the town”—Fox even shows a quick clip from the Stanley Donen/Gene Kelly film of 1949—but when the taxi can’t fit all of them in, he seems just as happy to declare that he’ll meet up with them later by crossing through Independence Park. Besides, he still needs to make a call of his buddy Mali’s girlfriend since he’s serving on guard duty, and to phone his mother to see if she’s possibly free for a luncheon.

Independence Park is also Jerusalem’s largest gay pickup spot, and we quickly perceive that  Yonathan is gay and knows exactly how to pick up someone in the place by waiting on a park bench until the appropriate person passes by and turns back or sits on another bench across.

Suddenly, however, he spots Erez, and not wanting to be seen by him, but also fascinated by his appearance, retreats behind a tree to spy on him, watching as another man sits on the same bench and the Lieutenant’s rejection, as he stands and walks away; Miller follows, intrigued by what he may discover.

He soon observes a handsome man pass by the Lieutenant and double back, while Erez disappears into the nearby men’s toilet. Every active gay street boy in the world knows the territory; and surely Yonathan recognizes the routine as he enters a toilet stall next to where he has observed the Lieutenant’s feet, only to discover another set of feet standing with Erez in the stall. 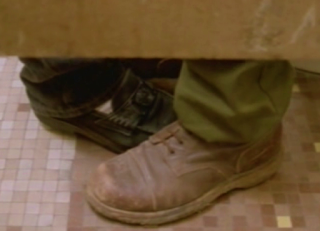 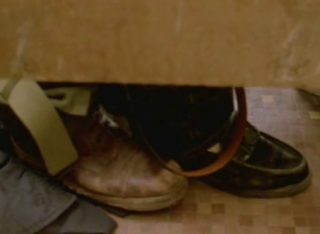 When the two leave, Yonathan finally ventures out of his cubicle only to be called back by another man who suggests he may have left his military I.D. behind. It’s clearly Erez’s, but Yonathan has no choice but to accept it.

Late by five minutes for his designated time of return, Miller is again punished in front of the group by the Lieutenant who repeatedly forces him to the ground for pushups, before demanding he stand and shout out the time of his arrival (6:05) before sending him down again into pushups. Upon the third repeat, Miller pulls out the I.D., slightly hiding it from the others, but making it apparent to Erez, who ends the routine by commanding him to guard duty when they reach Lebanon.

On the bus, a song is sung of the radio, for which Erez demands the driver turn up the volume. 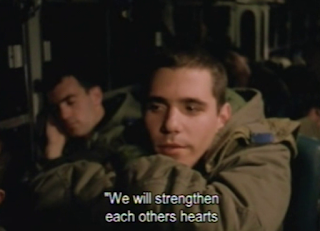 On the bus, a song is sung of the radio, for which Erez demands the driver turn up the volume.

The song lyrics begin “If the night is dark...,” the Lieutenant calling out for Miller to listen up to one of his favorites. It continues “We will strengthen each other’s hearts,” ending “a golden canopy above us, below an abyss / wave take me, wave take me to the land of dreams.” Miller smiles, the message having been received.