a smile and a wink

In the large majority of his films, particularly those featuring his spectacle-wearing, confused, clumsy, and cowardly personae, Harold Lloyd is regularly beaten and bullied during his long search for feminine companionship. In Grandma’s Boy he is represented as another version of the stereotype of the “mamma’s boy,” and in Girl Shy Lloyd reveals his endless difficulties in dealing with the opposite sex. In most of his works, his attempts to court the women he loves generally end in further bullying and separation even as he makes amazing and wondrous efforts to prove his worth.

In short, although Lloyd’s character is never quite portrayed as a gay man, he is always an outsider and, given his discomfort with dealing with others of both sexes, most definitely “queer” that word’s other meaning; indeed mothers and fathers, members of the community, and even his beloved grandmother recognize him as someone who has difficulties in fitting it. His girlfriends generally hold back their love for those reasons, awarding it to him—despite their continue attentions to the most despicable of male courtiers—only after, through remarkable feats of daring and cleverness, he has proven himself worthy of their love.

Accordingly, if Lloyd’s befuddled bespectacled character isn’t always a figure of immediate interest to the LGBTQ community, he repeatedly flirts with characterizations that suggest, to rephrase Cary Grant’s declaration in Bringing Up Baby, “he might just go gay” at any moment. In the short 1917 film, indeed, he does twice, as a matter of fact, engaging in behavior that is only part of the reason he is time and again sent off to jail.

One of the continual problems faced by our queer hero is his inability to keep his hat upon his head. The hat, for Lloyd, seems a crucial aspect of his identity, and in fact in Grandma’s Boy, for example, he goes back to face dangerous situations several times in order to reclaim it. One might argue that the hat becomes an alternative identity for him that helps keep his true identity—that of being the opposite of a virile male—hidden. The hat, along with his often inappropriate clothing—in Grandma’s Boy, for example, he is besuited in the mid-19th century style in the 1920s—truly  often defines the man in Lloyd’s films.

Accordingly, it is no surprise that, in an automotive outing with his pretty girlfriend when his sporty checkered hat flies off into the wind, Lloyd stops the car dead and runs back to retrieve it in a park where it has inexplicable hooked itself to a small brick edifice—perhaps an outdoor barbecue—next to which a seated man. That strangers is a thief, and the moment he spies Lloyd’s figure coming near him to reclaim his cap, he stands with a gun in hand to rob the poor young man of all of his money. When a policeman suddenly appears, having noticed the two men engaged in some sort of fracas, the robber suddenly puts the gun to our hero’s hand and claims that it is he who has just been robbed. 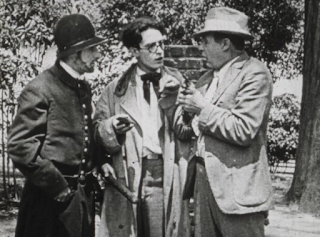 Lloyd is immediately taken into custody, but as the intertitles declare “A wise man never puts all of his eggs into one basket,” proven by the young man’s ability to pull a few other bills from his shoe, permitting him to bribe the cop. As the cop takes up the bills to closer observe and count them, Lloyd pulls the night stick from his hand and knocks him over the noggin. He takes back his money, salutes him goodbye and he walks away quickly from the now fallen law enforcer.

Meanwhile, in a nearby domestic dwelling a dapper man dressed in a tuxedo and top hat is seen tipsily leaving his house desperate for another drink; his wife, however, apparently has just gone through his clothes to remove any spare money from his pockets.

Our hero, afraid of being recognized for his crime ditches his beloved hat, his coat, and even his perhaps needed glasses in a nearby bush, which the hung-over gentleman soon after comes across, somewhat inexplicably determining he too should change his identity. He dons the checkered hat, glasses, and Lloyd’s coat at the same moment that the young man comes across a blanket which presumably a young woman has left behind with her coat and hat to enter a bathing spot. Our young hero pulls on those articles of feminine apparel as if cross-dressing were not something to which one might give a second thought.

At the same moment, our now recovered cop reappears and spots the new-born beauty, smiling with delight as Lloyd proceeds to flirt back.

With amazing dexterity, directors Lloyd and Gilbert Pratt now interweave their narratives, as we glean the reason behind the gentleman’s change of costume. Dressed now as a look-alike Lloyd he puts a handkerchief over his nose and mouth and returns home, ready, it appears, to act out the role of the thief in order to reclaim his own money stolen from his pockets by his wife. His wife, catching him in the act, almost captures the intruder as he attempts to escape out their bedroom window, she calling for the police. 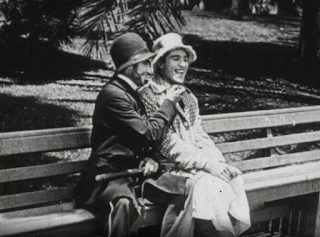 The policeman is now sitting on a bench with his newfound girlfriend about to embrace his new lover; he steals kiss as the young man in disguise playfully slaps him at the very same moment when our tuxedoed gent puts the hat, spectacles, and coat back into the bush and reclaims his own dinner jacket and top hat, an intertitle declaring that this is the end of Part 1.

The second reel begins with the woman whose clothing Lloyd has stolen coming upon him and the policeman on the bench, demanding back her coat and hat, leaving the young hero sitting in shock as she peals the articles from his body, leaving the astounded policeman next to the man his has previously attempted to arrest, his lovely maiden having suddenly disappeared into mid-air. Lloyd quickly pulls the policeman’s derby over his eyes and escapes to reclaim his own hat, glasses, and coat which the drunken gentleman has just left behind. 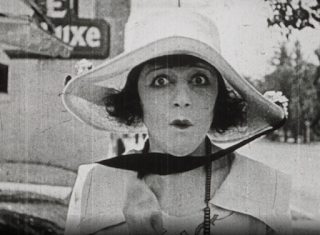 At that very moment, the gentleman’s wife is seen rushing from her house yelling “Help, help,” she (Bebe Daniels) recognizing the robber, once more mistaking the unfortunate Lloyd as the villain. Trying to quiet her, and explain his innocence, Lloyd even accompanies her to the police, but once there she points to him as the perpetrator of the crime, and he is locked away in jail. 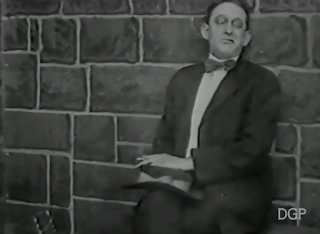 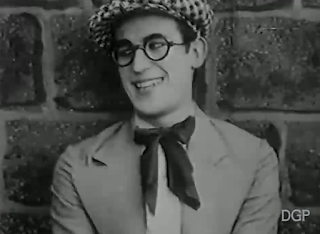 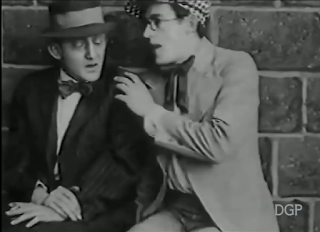 Despite the fact that the cell is filled with tough looking types, almost the first thing our friend does, after spotting a better-looking sort sprawled out on a ledge in the corner, is return his wink, edging over to get closer in an attempt to be rewarded with cigarette. Clearly, the man is a homosexual, a “type” our hero apparently recognizes, making friends with him for his own purposes. I should mention that this scene is censored out of some remaining versions of this film*—understandably if you don’t want to have to question the central character’s sexuality.

When, soon after, a line forms for vittles with Lloyd at the very end, he marches up to the front, tossing the cigarette to the floor behind him which sends them all running after it, allowing him to be served first. So, evidently, the writers explain his suddenly friendliness with the “jailhouse queer.” But this all seems to be providing his usually clueless character a lot of unexpected guile and underground experience.

His interference with the “normality” of prison life, moreover, puts the others, with the exception of the gay lounger, in an uproar, a fight breaking out, the largest brute of them sending them all, one by one, to the floor in a comatose condition. When the bully turns to Lloyd, he once more scoots his body down to the other end of the bench, permitting the wooden plank opposite to rise and knock-out the ruffian. The police, shocked by what seems the boy’s roughneck behavior, remove him from his current cell, putting him in with the two neighbors, who have been slowly removing bricks from the wall in hopes of an escape.

Our drunk, in the meantime, has since evidently tippled himself into an even more severely drunken state since a quite wealthily-dressed woman discovers him stumbling near her walkway, another cop picking him up and dragging him off. His wife appears at the station again, apologizing for her frequent visits, this time regarding her husband whom she wants released. The dandy is called out of his and joins his wife in hugs.

A few seconds later, after observing his cellmates’ progress, Lloyd picks up one of the bricks and slams it down upon their two craniums one by one, breaking through to....the police station next door where the judge is about to free our now finally sober well-dressed gent, who suddenly recognizes the checkered hat and, breaking into a laugh, reveals his part in the whole series of farcical events. Lloyd is immediately freed and, running from the station, discovers his cap has again flown off his head. As he looks back to see it clinging to a nearby wall next to which stands a bruiser, our bespectacled hero runs away in the other direction realizing that that accessory is no longer necessary to make him a man—or woman for that matter.

*The version of this film on Internet Archive, for example, has expunged this scene. And at the time of the film’s release some censors demanded that the part of this scene when he thumbs his nose at this friend when the other isn’t looking had to be cut.

Posted by greenintegerblog at 1:26 PM