Jacques Demy’s student essay for graduation from École Vaugirard was a film titled Les horizons mort (Dead Horizons) from 1951. This film is now available from Criterion and on several internet sites, including Kenneth Goldsmith’s noted UBU Web. Most of these sources describe the short 8-minute work as being “about a young man suffering from a broken heart.” 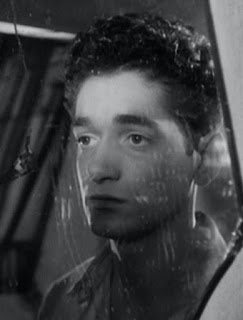 Demy’s images in stark black-and-white reveal a young student (played by Demy himself) living in a small garret furnished with an iron bed with a large pillow but few blankets, a broken mirror, and chair, offering a view that looks only into the dormers of the buildings across. A simple unadorned cross hangs upon the wall. Dressed in a white shirt and black pants, the boy certainly seems to be suffering as he looks into the broken mirror, from a small wall water dispenser pours himself out a glass of water, puts it down on an end table, and lies back down upon the bed.

With the boy we witness a flashback in which he is standing in a field watching from a  distance a man and a woman kissing. Suddenly they stop, the woman striding forcefully toward him. As she nears him she stops, shaking her head emphatically in the negative. Suddenly the man comes forward and slugs the young boy sending him to the ground. Back in the room, the boy pours a vial of black liquid into the water glass, the camera once again surveying the expressionist-like contents of the room. Wanly, he picks up the glass as if ready to drink what is surely poison. He goes to the mirror and furious with what he sees there sends the fragments crashing to the floor. When he takes up the glass of poisoned water it slips from his hands and crashes to the floor in slivers. Returning morosely to the bed, he is swallowed up by darkness pouring in through the window.

In the final scene we observe the sun has risen in the small open window as the boy rises, walks over to it, and looks out into the light.

This surely is a fable about a young man suffering—what most people I should imagine might read as a rejection by the woman whom he loved after having found herself a new, rather jealous boyfriend.

I don’t read it that way, however.. I know nothing about Demy’s early student years, although I do know that as an adult he was a gay man who died, so his wife Agnès Varda finally revealed in her 2008 autobiographical film Les plages d’Agnès (The Beaches of Agnès), of AIDS. But I have no clue as to whether or not when he made this film as a 20-year old, he had come to recognize his sexuality.

Certainly his three major early feature films through which he established his considerable reputation, Lola (1961), La baie des anges (Bay of Angels, 1963) and Les parapluies de Cherbourg (The Umbrellas of Cherbourg, 1964) were heterosexual fables without obvious LGBTQ overtones except for the highly homo-eroticized male leads in each of these works, notably Marc Michel, Claude Mann, and Nino Castelnuovo—although the women in all of Demy’s films, and particularly Anouk Aimée, Jeanne Moreau, and Catherine Deneuve, the stars of these three films, are equally notable beauties. And by the time of The Umbrellas, Demy had made it clear through his super-saturated images and his narrative of young love lost, along with the fact that it was an all-singing opéra populaire, that his vision of heterosexual love was a highly romanticized one bordering on the melodramas of directors such as Nicholas Ray and Douglas Sirk, both US filmmakers of the 1950s who proffered gay sub-narratives within their otherwise hetero-normative stories.

By the time he released Les demoiselles de Rochefort (The Young Girls of Rochefort, 1967), however, with dance accompanying Michel Legrand’s pop score, critics and much of his audience perceived that Demy shared, at least, a gay sensibility toward filmmaking which, as the years went on, became more apparent if not outwardly spoken, so that by the 1980s’ Une chambre en ville critics such as David Melville writing in Film might describe the work as being read “as an essentially homosexual story in heterosexual guise.”

Melville suggests, moreover, even before his 1962 marriage to Varda there were rumors of Demy’s gay sexuality. In a sense, however, it really doesn’t matter whether or not his 1951 student film Dead Horizons was a coded coming out movie in the manner of what I have been describing as the C-1 model of US writers of the late 1940s and 1950s. Not all of the numerous “coded” films I write about were conscious decisions on the part of their creators; the subconscious often offers as much to narrative as those stories carefully plotted out; films are described as dreams because in their dominance of image over language they allow us to express what often cannot be spoken.

Although there have certainly been a substantial number of failed first literary and cinematic loves that have ended in suicide or, at least, suicidal thoughts, usually such infatuations are something from which the young easily recover. And there is absolutely no reason for this girl’s current heartthrob to be jealous enough of this thin, pale kid whom the girl has utterly rejected to make him want to deck him. Instead, the girl, representing all women who soon discover their lover’s sexual shyness often emanates from sexual indecision, is reiterated by her male companion registering his homophobic complaint about the situation.

This boy has come to the realization that he has not just lost a girl, but the entire horizon upon  which heterosexual love is situated, and his suicidal reaction is unfortunately all too common for young men in his situation. As for Kenneth Anger, Curtis Harrington, Willard Maas, and John Schmitz, who represented their characters’ sense of religious guilt in a pièta, an angel, a snow angel, and a crucifix in their early “coming out” stories, so is Demy’s young hero reminded of his transgressions by the cross upon his bedside wall. And just as for those other US filmmakers their young gay men had to come to terms with their sexuality laying in their narrow beds or, as in Maas’ film, prowling the streets unsuccessfully looking for someone of the same sex to love. Tony Perkins’ ballad from Frank Loesser’s 1960 musical Greenwillow "Never Will I Marry" expressed it quite brilliantly:

Never, never will I marry

Never, never will I wed

Wide my world, narrow my bed

Born to wander 'til I'm dead

(An interesting aside: in order that Perkins might rehearse for this musical, Alfred Hitchcock allowed him to travel from Los Angeles to New York while they filmed Psycho’s shower scene in which he did not actually appear.) 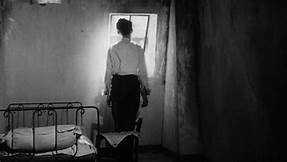 So Demy’s young character rises the next morning to look out over the world where he will soon wander. Fortunately, Demy, obviously bisexual, found a life-long companion in Varda. Reportedly when Legrand discovered that Demy was gay, he cut off their friendship.

Posted by greenintegerblog at 10:40 AM