pick of the litter

In her first narrative film she made for Gaumont studios—as opposed to her recordings of performances such as those I describe above and tableaux like  La Fée aux Choux (The Cabbage Patch Fairy) (1901) which simply establishes the myth that children are conceived within the leaves of cabbages—Alice Guy Blaché employed elements of drag which she would use time and again over the years to challenge and rectify male authority, as well as simply allowing herself to feature women in her films.

The three characters of Sage femme de première Classe (Midwife to the Upper Class) (1901) are all women, including the midwife, played by Guy’s then secretary, and the upper class husband (played by Guy herself) and wife (Yvonne Mugnier-Serand) who visit the midwife’s “stand” to purchase a new baby, as if they were out on a stroll to buy some vegetables or fruit. 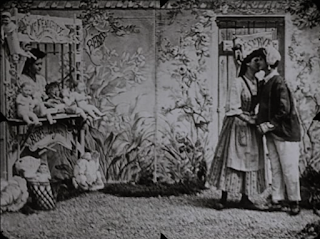 For a few moments, the couple remain at a distance from the midwife and her “dolls” as if debating the entire proposition. The wife suggests she might like to purchase one, but is not sure whether or not her husband approves. When he indicates that he does also want a child, even opening up his purse the demonstrate he’s ready to put his money up for the “adoption,” they couple embrace and kiss as they move closer to the sales stand.

The midwife proceeds to show them a series of “dolls,” some of them looking quite like human babies, others more like large wooden figures such as the Nutcracker in Tchaikovsky’s famed ballet—apparently only models of the real thing, none of them appealing to the couple.

Finally, the wife suggests they take a look at the “stock,” marked by a sign posted upon a nearby door. The midwife gladly opens the door to them, accompanying the eager pair down a lane between cabbages, pulling out prime “real” infants along the way and placing them upon blankets near the camera. The first one she lifts up is quite appealing, as the wife holds it for a few seconds with joy. In a clearly racist moment, the second child she pulls from the cabbage, a black baby, horrifies the couple who pull in obvious disdain, as she lays back into the cabbage head. 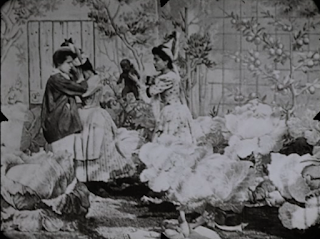 She quickly pulls out a couple more brawling babies, placing them on the blankets along with the others. Finally, after putting five infants upon the blanket, she pulls out a sixth child who seems to totally please the picky couple who quickly pay and march out with their prize, leaving the exhausted midwife to pick up the now bawling kids and put them back into their cabbage beds.

I think we must read this little tale as a rather savage satire of the upper class, arguing that they not only are able to buy the most beautiful homes, clothing, and possessions, but even get their “pick of the litter” when it comes to children.

It is fascinating, moreover, to think that this little film—quite unintentionally of course—represents the first very first cinematic depiction of two women “adopting” a child.

Posted by greenintegerblog at 7:21 AM