the ones who stayed behind

Argentinian filmmakers Bonzo Villegas and Carlos Vilaró Nadal’s quiet film of 2014 En El Mismo Equipo (On the Same Team) is ostensibly another of the many fictional films about gay sports players who have difficulties, given the macho hetero-normative values attached to athletic activities throughout the world. Moreover, Emanuel (Pablo Delgado) plays rugby, the most touchy/feeling male-groping sport in the whole world—except perhaps for wrestling. But wrestlers go after each other one on one, while rugby is a truly team sport depending upon the emotional bonding of the entire group. As South African director Chadlee Skrikker’s 2019 short film Hand Off reminded us, rugby is a difficult sport for a homosexual to play given that the entire team has to be comfortable with physical contact with the gay man.

Yet Emanuel has evidently a fairly easy sexual relationship with another team player, Tano (Emiliano Monteros) with whom he still hasn’t completely come to terms. As the two escape to the woods after a game, he insists he’s not like his friend, that he thought Tano was the only one with whom he could share his feelings, but now realizes that they’re “different”: “I’m not like you.”

“Who says?” Tano counters, arguing that Emanuel simply has to relax, to accept life as it is, which will make all the difference. The two make love, but we sense a deep frustration, even anger remaining in Emanuel’s thoughts as we see him in his room later slugging his rugby ball as if it were a boxer’s heavy bag.

A dinner conversation of his family members concerns, among other things, a friend who has gone away to Buenos Aires and come back as a gay man. Although a couple of those at the table argue something to the effect that it’s not so unusual these days, several, including Emmanuel’s father, appear to feel it’s still “unnormal,” and most of the women side with the gay man’s local ex-girlfriend. One quieter sister, Laura (Verónica Paz) observes her brother and seems to sense his troubled state of mind, particularly when he suddenly leaves the table.

She too appears on the small porch apparently ready to talk with him, but he has been greeted by a another of rugby buddies passing in a car who insists that he join them in the evening’s pre-game night, since the next day they are playing the team from Santiago. He agrees, although the long shower he takes in preparation makes clear even that choice has involved a painful sense of conflict.

He arrives at the party only to see his sister is there as well, already fairly drunk, and he is surprised by her presence. Meanwhile his friends force him to speak with a girl, Agustina, of whom he has previously commented. He briefly talks to her and her friends, but soon excuses himself “for a moment” to get a drink; he never returns to continue their conversation. Wandering around the lawn, observing others of his teammates involved in heterosexual flirtation and love-making, including Tano, he seems lost, and finally pulls away from the party, standing apart from the others. He is soon joined by his sister.

She speaks to him simply: “I don’t know if you know this, but there’s a lot more beyond the mountain. The world doesn’t end at Tucuman or Yerba Buena. The house is not the only place you could live in. Or rugby isn’t the only activity you could do. These parties aren’t the only place you could be at. You could live a life completely different if you decide to do it. But yeah....you’re gonna need a lot of balls.” Not a great English language translation of the Spanish original, clearly, but wise observations nonetheless.

Through several frames Emanuel has been seen carrying an airline add advertising freedom, which now makes it clear that what has been holding him back is not rugby, or even his inability to accept his homosexuality. He is after all different from his friend Tano, not in his sexual orientation but in his desire to escape from the small town restraints in which he is entrapped. Many of the problems facing young gay people lies not so much in their inability to accept themselves as gay individuals but in the inertia of having to break with and move away from the normative heterosexual pulls of their lives. It is simply easier to fall into the patterns of nearly everyone else in the world in which you’re born and raised. Some gays can’t come out because it takes the energy of determined self-will to escape what everyone around you defines as the preferable way to survive.

But in the end, Vilaró Nadal and Villegas’s small gem is not a “coming out” movie nor a movie about the difficulty of escaping from the heterosexual demands of playing sports, but a story about a young man coming to terms with adult life, of defining where and how he wants to live that life whatever it might bring. 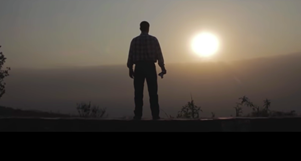 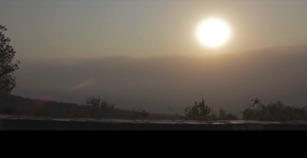 Clearly Emanuel (which means “God with us”) does not sleep that night. And the next morning we see him wandering a wooded road before standing on a small stone wall to stare out over the valley at the rising sun. The camera pans down to see the small travel ad slip from his fingers, and intercuts with a few faces from his immediate past life. When the camera pans back up to the wall, Emanuel is no longer there, having gone only God knows where.

After writing the above essay I came upon another film just a few days later by French directors Fabíen Cavacas and Camille Melvill that was so similar in its thematic—particularly since that film, Passer les Champs (Beyond the Fields), also related to the consideration of gay brothers and gay sports that I had also just been exploring—that I was almost startled by its relationship to the piece I had just titled “Beyond the Hills.”

This work also contained a young man involved in amateur sports, in this case soccer, who had stayed at home apparently out of a sense of stasis. He seems unmotivated even to pursue the job his parents have hinted that a friend is willing to offer him, refusing to even make the call. Indeed, except for his younger brother Théo (Pierre Prieur), Lucas (Maxime Taffanel) seems to shun women and have surly relationships with his parents and his soccer friends, the latter for whom he may soon serve as their coach.

Like Emanuel of the above film, Lucas seems trapped in the community in which he lives, and bitter about that fact. But at least the Argentinian rugby player has a local friend with whom he engages in sex. Lucas, who appears to be heterosexual has no apparent girlfriend and even his seeming soccer buddy Nathan (Théo Pittaluga) irritates him, particularly when he shows interest in befriending Théo.

We perceive this not as a form of jealousy, but a fear of sorts that his brother may be hurt through their friendship, since Théo is openly gay—only to his brother. And Lucas evidently has assumed the role of his protector, despite the fact that in the small farming village in which they reside there seems to one to protect him from. As Théo confirms, there are no “faggots” in his class, which explains why he has been chatting online with an older man, who he wants to meet when the man comes to town on business, a meet-up which Lucas warns him may be dangerous.

Thus, it appears that Cavacas and Melvill have set us up for a situation very similar to the one I wrote about in the Norwegian film of 2003, Precious Moments, about a young gay man whose having sex with an older man ends in his partner’s arrest—although the sexual age of consent in France is 15, and even if Théo, since he’s still attending school, is clearly not the age he claims to be when he meets the stranger, 20, he is certainly of legal age.

But before that, this far too subtle tale—almost as if afraid, like characters, to tell its own story—seemingly first takes us down a kind of dead end, which perhaps clarifies both Théo’s and Lucas’ long  silences and apparent frustrations.

The morning after the brothers’ discussion Théo drops his Lucas off at soccer practice, meeting briefly with Nathan, to whom the boy has loaned a book to read, Allen Ginsberg’s Howl. Nathan, in turn, invites Théo to a team party they are planning for that evening, telling the younger boy that he would particularly like to have him attend.

It is after that meeting, moreover, when Lucas becomes even more incensed about Nathan and, by the end of the day, decides against even attending the party which his teammates are throwing. Théo does attend, clearly out of place since most of the players are entertaining their girlfriends, including Nathan. But near the end of the evening, sitting alone, Théo is joined by Nathan, telling his girlfriend that he’ll catch up with her. There is no real conversation between the two, but when Théo asks Nathan if he wants to go somewhere, Nathan stating that he can’t—beholden as he is to her girlfriend of 3 months—we can only presume that something sexual has been going on between the two, something in the nature of Emanuel and Tano in Vilaró Nadal’s film.

The only alternative for Théo is to meet up with the stranger in the hotel.

From the moment the boy encounters the older man, who when he enters is on the phone with his wife, we recognize that this is not a good situation, particularly when the elder orders Théo to strip and not “play around” like a kid. We never discover precisely what does happen. The directors only show us a sense of rising tension: Lucas at home in bed—reading, incidentally, Ginsberg’s Howl—obviously worrying about the time and the whereabouts of his brother. And, finally, a call from Théo, who having motorbiked to the hotel, is now asking for Lucas to pick him up.

What has happened in that room is never explained; but we do observe a cut on Théo’s lip and can only suspect that the boy got cold feet and attempted to leave, infuriating the older man. The boy refuses to say anything about the event. Théo simply asks can they stop somewhere before they return home. There is no other place, we realize, in this village. They stop at the soccer field, where one drunken survivor of the party lies like a dead man in the middle of the open space.

The brothers, sitting together, stare out over the fields around them, Théo suddenly blurting out a question that might have been in our minds as well: “Why don’t we leave?”

The brothers, sitting together, stare out over the fields around them, Théo suddenly blurting out a question that might have been in our minds as well: “Why don’t we leave?”

In coming out to his brother and in his obvious search for sexual gratification the younger brother has already made clear that he is no longer able to survive in the emptiness of the small village in which the brothers live. But Lucas, apparently, still unable to define his own sexuality or to even comprehend his entry into adulthood, seems permanently infantilized like so many young males who settle down with the first woman they meet and hang on by a thread through the rest of their lives without waking up to who they are or might have been. Like Emanuel’s sister, Lucas will be defined by staying behind.

Posted by greenintegerblog at 11:26 AM