Unlike so many films of the 1930s advertised as LGBTQ “conscious” such as William A. Wellman’s The Public Enemy (1931), Ray Enright’s The Tenderfoot (1932), Roland Brown’s Hell’s Highway, Charles Brabin’s Stage Mother (1933), Cecil De Mille’s The Sign of the Cross (1934), Lloyd Bacon and Busby Berkeley’s Wonder Bar (1934), and several others which toyed with male and female homosexuality, Jacques Deval’s 1936 film Club de femmes offered up the real thing and much much more, paying dearly for the consequences. As film critic James Travers summarizes it:

“Lesbianism, prostitution, child birth out of wedlock, crime of passion, cross-dressing, female nudity—there is not a shortage of materials to tempt the censors. When the film was released, whole swathes of the film were cut. As a result of this mutilation the show had meagre showing and was soon forgotten. It was only when the film was rediscovered 50 years later that it earned the recognition it merits.”

And, although the critic from Time Out describes the work as being “Playful, energetic, and sustaining a high level of female hysteria, the movie is certainly camp, often riotously funny, and nostalgically enjoyable, but don't expect feminist leanings just because a lesbian's around,” I’d disagree with the last of their sentence. The film’s director Madame Fargeton (Eve Francis) of the misconceived citté fémina founded to protect angels from temptation, discovered, much to her dismay and eventual delight that the angels find their own way into temptation nonetheless, but by banding together greet, defeat, and survive it when necessary. The story describes her was being silly, which some critics reiterate, but actually in her sympathy with her own sex she appears, in the end, to be quite liberating and effective as a personal link between their over-protected home lives and the sometime brutal abuse which as women they face alone in the French capital city. 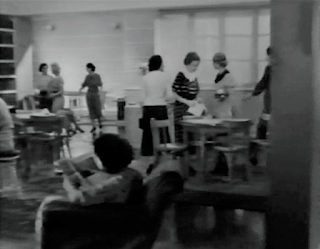 But to get to that point Deval’s film, assisted by the great French director Jean Delannoy (who directed one of my favorite of early LGBTQ films Les amitiés particulières of 1964), the director takes us through a nearly all-woman version of Edmund Golding’s Grand Hotel—which in fact might define this stage door-like residence which combines an Olympic size swimming pool, a moderne  library, a commodious commissary, and comfortable rooms for several hundred young women mostly under the age of 20, who, as the first frames show us, need protection from outright rape.

In fact, the way young innocent women from the provinces are treated in general in the Paris of 1936 seems something like young runaway children trying to find a safe place to live in Los Angeles or New York. Even with the “protected spires” of the “Club de Femmes” a planted switchboard operator, Hélène (Junie Astor) savvily connects up new young beauties with her boyfriend, who apparently runs a prostitution ring. One such beauty, Greta Kremmer (Betty Stockfeld), fresh from Copenhagen, is quickly brought into the ring and finds herself nightly dating elderly wealthy men from Europe and the US. An unsuccessful art student, she seems quite ready to put down the brushes and pick up money and diamonds lavished upon her until an American client catches her attempting to steal money from him in order to pay back a loan from her pimp. He springs her from having to spend time in jail time, but the experience sends her into a feverish period of nightmares tended to by the in-house doctor Gabrielle Aubry (Valentine Tessier), wiser in the ways of the world than her the director and wiser about the behavior of some of her patients than they realize. 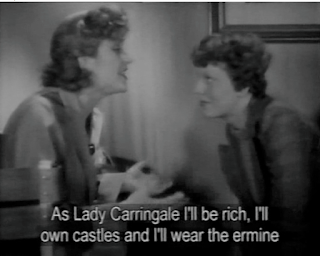 After her confrontation with the French police, Greta is determined to marry a wealthy count of age 85 just for his money and title, but in the end determines that it’s simply not worth it, and returns to the feminine retreat to start all over again, now of age but unable to pay higher room rent, but sure, she will find a man she truly loves and maybe a job to support her until she does.

Another of the tenants, Claire Derouve (Danielle Darrieux) of this protected tower of decency is a dancer for the Folies Bergère, who begins at the lowest listing in the billing and during the course of the film rises to the top of the dancers; along the way she has collected a boyfriend who wants to marry her, Robert (Raymond Galle), the only male in the cast. Desperate to have some private time with him, she and he make some valiant efforts to sneak into the protected territory, he posing as a delivery boy, a doctor to help her sprained foot when she “accidentally” falls from an exercising swing, etc. But each time either the director or the doctor foil their plots. 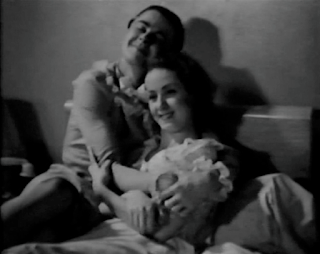 The third try, however, works beautifully. Dressed as a woman, Robert is quickly accepted as her cousin and finally makes it into her room where the two can at least cuddle and kiss, if nothing else—if only he can escape the dress she has sewn upon him. Unfortunately, during their couple of encounters they do find their way to discover what exists in the “nothing else,” and Claire becomes pregnant, hiding it from everyone, including her friends.

Eventually, however, she cannot resist sharing the fact with one of her closest acquaintances, and within moments—comically demonstrated by the longest sequence ever devoted to the various methods of gossip—everyone in the “club” knows, giggling like high school girls, but somehow managing, nonetheless, to keep the truth from the director and the doctor. Before long all the girls have taken up knitting.

When the baby actually comes all the women gather outside Claire’s door as the doctor, called to the room, delivers a newborn....girl of course into the hall of no temptations. Even the furious  manager Madame Fargeton cannot help but to beam down a smile of joy upon the mother and infant that immediately releases her from her prepared rant.

A third romance is understandably, given the views of the day, treated far more seriously, but even here, unlike how Vito Russo might have predicted the outcome, the young lesbian dormer, Alice (Else Argal)—likely the first open portrayal on screen of a lesbian in French cinema history—is given enormous respect.

At first Alice simply attempts to work around it, slowly drawing the girl closer and closer to her—so much so that at one point when the room next to Juliette’s becomes open, she begs the manager to move Alice into it.

But by this time Juliette has received a marriage proposal from her boy back home, and suggesting that she will look over the girl’s positive response for errors—in the process destroying her letter and telling the girl she has mailed it on—Alice perceives that she has gone too far. Seemingly inexplicably she pulls away from her friend, angry even that by moving her so close to her room she is even further tempted to do what all the unseen males in this film do without compunction. Alice suffers deeply. Finally determined to ask the manager to move to a hotel, she faces her nemesis. But since she is still underage, and her father has placed her in Madame Fargeton’s charge, she is told that she must get her father’s written permission, something she knows he will refuse. When the director attempts to discover what is behind her request, Alice refuses to speak, knowing that she is trapped living a few feet away from a woman she is madly in love with but whom she dare not touch. She has no one even with whom she might discuss her dilemma. It is strange that the woman who most loves women, cannot find another of her sex in citté fémina with whom to share her heart.

In the distance Alice has put between her and Juliette, the switchboard operator, in search of another pigeon for the prostitution ring, creeps in, arranging for a dinner with Juliette and her boyfriend to discuss a new, better paying job.

When Juliette arrives home the next morning, desperately sponging off her body in the shower, it is apparent to Alice what has happened. And by the next frame it appears that the girl has returned home to Nancy and the fiancée still awaiting her answer about marriage. 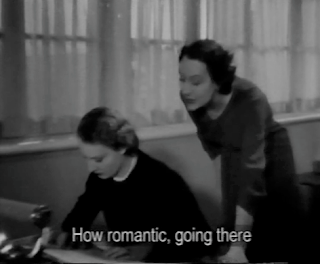 Righteously bitter for what has occurred, she poisons Hélène’s dinner. Despite the good doctor’s ministrations the girl dies, and having lied on the certificate of death about the cause, Doctor Aubray demands the medical student serves as a volunteer nurse on a trip to a leper colony to provide shots to those who need them. As Alice explores a map of her destination in Oceania, another girl observing her suggests how a romantic such an adventure might be. And, if we imagine only the positive we might hope that this justified murderer may survive and grow through the event, even returning to find someone to love. But I wouldn’t blame Russo if he were to reprimand me with the proverbial “I told you so,” “the queer must suffer a calamity, be put out of everyday human touch.” At least she dies, if she does, off stage. And Deval does leave it to each of our imaginations.

The club de femmes survives its first year, with everyone a little wiser and less terrified, perhaps, of male intervention. Perhaps the sophomores can now teach the freshwomen better how to fend for themselves. But what monsters they are still lurking about the Paris boulevards.

Posted by greenintegerblog at 4:33 PM