ejaculate of the gods

What truly is the central question that arises from seeing Kenneth Anger’s Eaux d’Artifice, particularly for the first time is: “What is queer about this?”

In hindsight, anyone who has seen, discussed, or written about Anger’s astonishing films and career would know that the man is gay, and that during his lifetime he created a vast treasury of wildly disparate images that might define gay male life: lovely soldier boys, firecrackers in their pants crotch, Christ-like crucified queers, leather-jacketed motorcyclists, pretty boys polishing up their pink convertibles, longing and languishing Pierrots and Columbines, and bead-loving Pubbas are just a few of his representations of gay masculinity.

But what makes this film (which must arguably be seen on a full wide-screen) so difficult to contextualize is its seeming abstraction. Although we perceive we are witnessing the fountains at the Garden of the Villa  d’Este (commissioned in 1560 by Cardinal Ippolito II d’Este) outside of Rome, the only image aside from the brief flickers of the spouting apparently basalt gorgons of the fountains themselves, is a well-dressed woman in a feathered gown and hat, who seems throughout the water displays—with their musical accompaniment of the staccato tonally-“tortured” refrains by Antonio Vivaldi’s The Four Seasons—to be mostly descending endless staircases, running away from the camera, often times quite clumsily, and moving quickly off into the vantage point throughout the sprays of the fountain water, as if she were, a bit like a featureless Cinderella figure, attempting to hurry home after the ball. 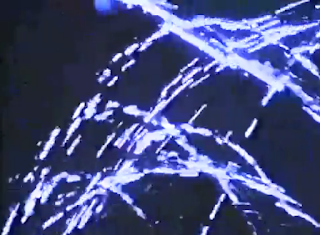 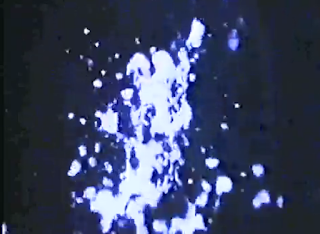 I suppose one might simply ask the viewer to read Anger’s images like a Rorschach Test. What do you see other than the obvious sprays of white water against a endlessly blue landscape?

The blue color was obviously important to Anger since he filmed the work in black-and-white, shot on infrared stock and printed with a cyan filter, thus converting the blacks to blues. So let us start there. Why a blue fountain in the middle of night? Why a white-feathered female-like figure, with whom the film begins, if you watch carefully and look for the feathered hat, standing behind a single spurt of water in a phallic position? 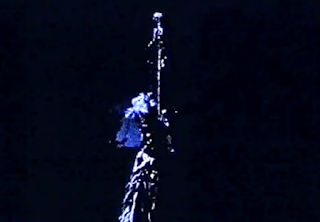 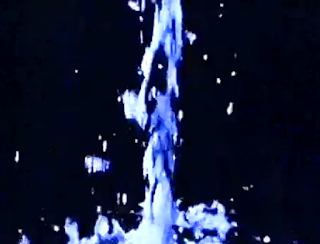 Playing on the title of his 1947 film Fireworks, which translates into French as “feau d’artifice,” these spermatic fireworks, as Deborah Allison suggests in her FilmIssue essay “Wet Dreams and Waters Sports in the Garden of Delights,” consummate Anger’s search for “sex-magick,” so argued one of Anger’s influences, occultist and notorious Satanist, Aleister Crowley, by “the dreamer attaining wholeness through the transcendentalism of sexual ecstasy and the concomitant communion with the spirit of Lucifer,” the god of light, and therefore Anger’s patron saint of film.

Particularly in Europe, where Anger was living at the time he made this film before his return to the States that same year, a “blue boy” is the urban street name for a gay boy, a term that still defines a male homosexual in Russia. So the blue of the film is to be recognized not as necessarily a generative force as much as it is a release of seed to the world in pure celebration without heterosexual desire being involved. 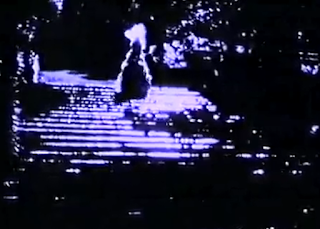 The woman, dwarfed by the fountains through which she is fleeing (indeed the actor playing the highly dressed female may have been a dwarf of uncertain gender, billed alternatively as Carmillo/Carmilla Salvatorelli but generally thought to have been a male) is clearly terrified by the fireworks of spermatozoa, and is racing away from what she has accidentally witnessed—not stimulated or caused. Her fear is quite evident in her endless descent—in Freudian terms the symbol of the end or aftermath of sexual release. As if witnessing a volcano of piss* and cum, the female must escape if she is to survive. Her only moments of pause are to fan herself and, near the end of the film, to turn toward the camera as if she has momentarily succeeded in her escape. But, of course, if she is a cross-dresser, she is also a gay “queen” fearful of the rough trade that she has just encountered, if somewhat entertained by the sight.

Anger himself described his seeming “heroine” as a Firbank-like character, a reference to the gay playwright and fiction writer Ronald Firbank whose arch characters chatted in “high camp” conversations in the early 20th century, long before such a term was even recognized.**

This film was chosen for inclusion in The National Film Registry.

*Although it cannot be verified, Anger claimed that the Cardinal d’Este was “a sexual pervert...[who] like being pissed on... So the whole garden is actually a dirty joke.”

Posted by greenintegerblog at 4:39 PM