the thief of love

Louis J. Gasnier’s silent film of 1925, Parisian Love is a highly crafted film that is also one of the strangest works of cinema of the period. Through the device of a sexual and class-structured ménage à trois of a woman named Marie (Clara Bow), her lover Armand (Donald Keith), and a doctor/professor Pierre Marcel (Lou Tellegen), Gasnier’s adaptation of a story by F. Oakley Crawford interweaves Apache dance and gangsterism with upper-class tangos of thievery that often seem to be indistinct except in the locations of where the dance is held. While all seek innocence and purity, the methods they use to obtain what they desire are filled with mendacity and violence. And finally, while the men seek out heterosexual love, they attain something close to what they most seek in their homosexual love for one another.

The film sets the tone almost immediately in its first frames set in a seedy French bar which wealthy tourists haunt in order to catch a glimpse of the Paris underground Montmartre life. 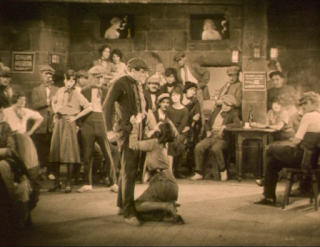 Marie, Armand, and their partner “the Knifer” (Jean De Briac) give them the performance of a lifetime, as Marie and the knifer begin a rendition of the Apache, he bringing her close to him in dance for a few moments before throwing her to the floor, pushing her off, kicking and dragging her, as she gradually staggers back to standing position, moving toward, and entering into a deep kiss as the seemingly jealous Armand pulls a knife and charges at the male dancer only to be stabbed to death, the police called in as the patrons rush out of the café in horror—returning to their meals when the “actors” have been swept “off” to backstage safety, where they change their clothes and gloat over their successful performances. One of them has also found a dropped business card of one of the patrons, Pierre Marcel, whose mansion they suddenly determine to rob that very evening, presumably because he appears to be spending a night on the town.

The gang checks out the place, Armand and the knifer climbing to the bedroom balcony while Marie, dressed as a man, waits below on guard. Hearing noises, Pierre rises from bed and hides in the shadows as the two men enter his room, hoping by suddenly turning on the light he may scare them off. 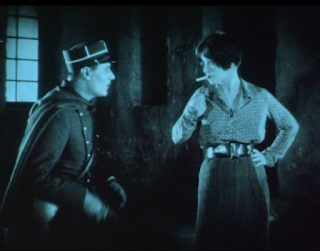 When he does so, however, “the knifer” pulls his switchblade ready to kill and rob Pierre, but almost inexplicably Armand stops him, fighting him to protect Marcel from murder as the knifer leaps out the window, now both he and Marie being chased by the alerted police. The police kill and shoot and kill the knifer, and think they have wounded Marie, who instead tricks them by returning to female garb and walking past them, hitting up one cop with a request for a drag for her cigarette.

The police, meanwhile, attempt to arrest Armand, but Marcel lies for him describing his as a friend posing as a decoy; and indeed he does seem to recognize the young man, but also quickly discovers that Armand has been gravely stabbed in his attempt to wrestle away his cohort’s knife. Armand falls into a coma, and a doctor is called, a long period of recuperation following. 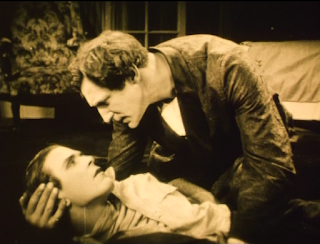 From the very beginning there is a look of deep longing and sexual desire for the criminal expressed in Pierre’s facial gestures, glances that clearly Armand does not quite know how to interpret.

As Armand recovers, he admits that he had once taken a course with the noted scientist, but that his life as a student had radically when he was mistaken for a thief, choosing to become one in retaliation. And yes, there was a woman involved, a woman with whom he was still desperately in love.

You can almost see Pierre (through Tellegen’s excellent acting) suffering with the revelation. This is no coded film, and he realize that he has quite obviously fallen in love with Armand, and has no intentions of giving him up to some woman from the street. Yet, perhaps just to satisfy Armand’s heterosexual desires, he does arrange for him to meet a proper lady of the upper class, a beautiful young woman whose attentions, if not directly leading to Armand falling in love with her, are nonetheless pleasant to him. 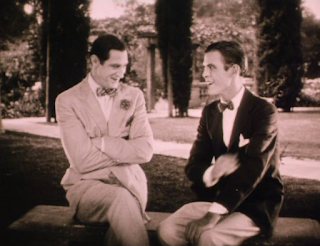 When the young man has almost healed, Pierre “sentences” Armand to stay on with him another six months. And it is apparent that Armand is also willing to remain with Pierre, if not precisely as a lover, clearly as an intimate friend. Indeed, their deep friendship reminds me somewhat of that between the two men in Clarence Brown’s Flesh and the Devil of the very next year.

Armand begs only a single hour of complete freedom before he commits to what appears to be a kind of conjugal relationship with Pierre, which the elder, with some hesitation, grants him.

Meanwhile, Marie has taken a job as Pierre’s maid so that she might determines for herself what her lover’s situation is. Mostly she finds her job consumed by keeping away from the advances of Pierre’s socialite friends. When she sneaks into Armand’s room, she is interrupted by Pierre’s introduction to Armand of Jean D'Arcy, with whom, as Marie hides in the closet, Armand appears to strike up a relationship.

When she hears from others in the Apache gang that Armand has been sent by Pierre to England in a business matter, and—as they joke about the obvious relationship that has developed between the two men—it wasn’t she who Armand kissed goodbye, she becomes furious, plotting revenge.

Angry about the turn of events and tired of living with the snuff-consuming, wine guzzling Madame Frouchard (Lillian Leighton) and her alcoholic husband, she takes off—at the very moment when Armand comes to visit her in the old apartment, hoping to find his lover and possibly to renew their relationship. He leaves on his business trip to England believing that his affair with Marie is permanently over.

Marie, meanwhile, steals money from her gang to front Frouchard and herself as a wealthy aunt and niece, relative to one of Pierre friends who has just died. The two, living at the Regent, create a comical sequence of events wherein, despite a series of outrageous faux pas enacted mostly by Frouchard, she successfully seduces Pierre who, obviously without his male lover around, believes in her innocence enough to determine to marry her. Apparently, like so many other homosexually-inclined gentlemen of the day, a heterosexual marriage is still a necessary cover. And before we even assimilate the fact, the plot reveals their nuptials are completed. 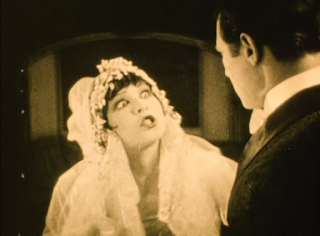 Marie now reveals to Pierre just how she has tricked him and the financial demands she will not expect to release him from her treachery.

At that very moment, however, Armand, having successfully finished his business negotiations, returns to find Marie married to his new male companion. Both Armand and Marie quickly realize that they are still in love with one another, but once more it is apparently too late, as the Apache gang takes their revenge on Marie for absconding with their stolen money, shooting her while in Armand’s arms.

As the somewhat ludicrous plot will have it, Pierre, realizing that he has himself become a thief, not of money but of love—having stolen both Armand and Marie for his own desires—goes on the lam, taking the first steamer out to America. Marie, although seriously wounded, must now also go through the long process of healing, but this time in Armand’s arms. 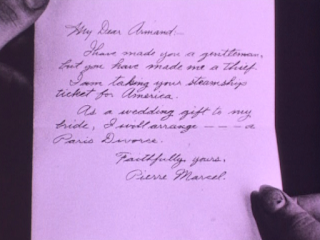 Evidently, both of the younger, lower class thugs must symbolically die before they can be  reborn as wealthy people of wealth and class, provided to them by Pierre, who has left his house and fortune to the normative heterosexual couple.

Parisian Love, at least in Gasnier’s hands, is not so very different from early 20th century English love or American eros: even if this film has been utterly honest about the homosexual desires of Pierre and Armand passive receptivity, true love, normative love inevitably must win out over the “perversity” of that love. Same sex love once more must be sacrificed to the sexual “normality,” the outsider culture must be abandoned so that the wealthy might survive. The queer is no match against the social order of the status quo, even if the lovely effete Tellegen gave it his best.*

*Not only does Tellegen appear as an effete aesthete in this film, somewhat like Oscar Wilde, but  the 1915 interview with Djuna Barnes, published in my collection of Djuna Barnes Interviews, reveals him to be precisely that; he even quotes Wilde.