the manly man and the effeminate womanizer

Harvey Thew and Seymour Hicks, screenplay (based on the French play by Yves Mirande and

The 1930 farce The Matrimonial Bed was directed by one of Hollywood’s most successful directors, Hungarian-born Michael Curtiz who seemed to be able to create credible works in nearly any genre from tough guy gangster films such as Kid Galahad (1937) and Angels with Dirty Faces (1938), cinematic swashbucklers like Captain Blood (1935) and The Adventures of Robin Hood (1938), and westerns Dodge City (1939) and The Comancheros (1961) to noir melodramas such as Mildred Pierce (1945), war-time love and adventure tales Casablanca (1942) and Passage to Marseille (1944), and beloved dance and musical family entertainments Yankee Doodle Dandy (1942) and White Christmas (1954). The range is all the more astounding given the fact that at least three of his films, the farce I’m about to discuss, Young Man with a Horn (1950), and, the total unpredictable classic Casablanca, have substantial portions of their narrative devoted to explicit or coded issues of interest for LGBTQ viewers; while he, contradictorily, turned what might have been an openly gay biopic of Cole Porter, Night and Day, into a fairly conventional heterosexual love story. And you have to give him credit for revealing the standardly restricted slapstick comedian Danny Kaye as the talented lean attractive bisexual dancer he truly was in White Christmas, while in that same movie providing Greek dancer/actor George Chakiris with one of his earliest film roles as one of four gay-looking chorus boys sliding around and about Rosemary Clooney as she sings, “Love, You Didn’t Do Right by Me,” a role that might have been truthful to reality, but clearly did not hint at his true acting and dancing abilities we would later discover. On the other hand, Curtiz managed to transform a tough-talking gangster figure such as James Cagney into one of the greatest hoofers in film history.

In fact, one might argue, it is Curtiz’s ability to show things in a manner slightly askance that reveals another reality that is his true talent, one he demonstrates time and again in his early 1930 manic comedy. In fact, absolutely everybody in The Matrimonial Bed is represented as somebody who they really aren’t or are misperceived to being rather than who they truly are. By the end of the film we’re not quite sure who is who anymore, and even the central figure of this crazy work isn’t certain of the names of his four boys, mixing up Napoleon with Gustav, and Leopold with....well, as our hero declares, “I always forget.”

The real problem with hairdresser Leopold Trebel is that he has forgotten, everything for five years in fact, and by movie’s end cannot forget what he has discovered in the few hours since he arrived at Gustave Corton’s mansion—although he would very much like to.

But since this contrivance relies very much on plot, we must return to the beginning. The movie opens with Juliet Noblet (Florence Eldridge), now Mrs. Corton, away from the house visiting the grave of her former husband, Adolphe Noblet (Frank Fay). Her beloved Adolphe died 5 years ago to the day in a train accident. Beloved by nearly everyone who knew him, one of his admirers, his former cook, Corinne, is seen decorating the mantel with real vegetables (of which he was evidently very fond) under a large portrait of him, just returned from the framers who have restored it from a mysterious fall to the floor. 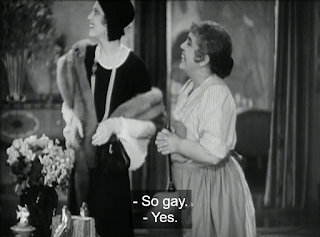 We shall soon witness that “fall” when, upon returning, Madame Corton determines that she needs a new hairdo, her maid and best friend both suggesting their favorite hairdresser, Leopold Trebel, with whom they both are evidently having affairs.

If Mr. Noblet was loved by all—as both his old friends Dr. Beaudine (Arthur Edmund Carew as Dr. Fried in the credits) and Mr. Chabonnais (James Bradbury, Sr.) declare time again “What a man!”—Juliet’s current husband, Gustave Corton (veteran Hollywood actor James Gleason) is a grumpy curmudgeon whom almost everyone except Juliet dislikes. Understandably he is irritated that the portrait of his wife’s former husband graces their parlor.

When we finally meet the womanizing hairdresser we quickly wonder, given his eccentric affectations and seeming interest in all things sexual both female and male, how this man has time, with a wife and two sets of male twins, to woo his women customers as well. Let us just say that Fay’s characterization of Leopold, who wears his apron under his coat making it appear he was wearing a woman’s dress, is one of the gayest outside of Hollywood’s “pansy” portraits portrayed on screen previously.

And screenwriters Harvey F. Thew and Seymour Hicks (author of the English-language stage play adapted from the French original) waste no time hurling out the double entendres. Even before we meet Leopold Trebel—who we quickly discover is Adolphe Noblet who, miraculously survived the train wreck, suffering amnesia ever since—he is described, by the cook, as being “so gay, [with] such a smile. So different from the new one” (meaning Juliet’s new husband Corton). Although “gay” generally meant something else in those days, as Cary Grant’s utterance in Bringing Up Baby (1938) makes clear, the word already had connotations which linked it to homosexuality as early as 1930. But even it we took all those statements to be mere heterosexual affirmations of his pleasant spirit, the next few lines uttered by Juliet’s friend regarding her hairdresser’s amorous activities—“He’s practiced on my head for months. And oh when he touches you, what a thrill!”—give evidence of pre-Code hanky panky that we won’t see in the movies again for decades.

Indeed, whenever anyone in this film wants to assert Trebel’s legitimate credentials for his untoward activities in this film, they simply declare him to be “an artist,” the code word for centuries for bohemian sexual behavior and, in many instances, a queer. Trebel seems to be a bisexual interested in everything and everyone.

Coincidentally with the hairdresser’s arrival, Noblet’s old friends Beaudine and Chabonnais have been invited for dinner, and when Juliet, the doctor, and the continually tippling Chabonnais catch sight of the barber they are shocked, Beaudine, in particular, who begins plotting to discover the truth about Trebel’s identity through hypnotism.

Once the situation has been set up, the plot suddenly becomes immaterial, while, as one might expect, the mistaken identities are compounded by the moment, particularly when the doctor manages through hypnotism to dispel Trebel’s amnesia, making him aware of who he truly is/was, Adolphe Noblet, married to Juliet, and living with her in their house. Since he now cannot recall anything about his hairdresser self, the rest of the film is spent with the entire cast, including Corton, Trebel’s wife Sylvaine (Lilyan Tashman), and the nurse of Juliet’s baby son, misconceiving his behavior.

What matters now is the series of sexual innuendos, particularly when Fay is still performing as the bisexually included Trebel.

Hardly has he entered the house, than, observing the wave in Juliet’s hair he suggests she shift its position: “You should turn over occasionally.”

With everyone staring at him in wonderment, he often stares back, flirting with both his old still unrecognized friends, as well as with Juliet and even Noblet’s devoted cook, who upon recognizing her beloved former employer, rushes in to ask, “Master, can I kiss you?” Trebel’s answer: “Well certainly, if it will do you any good.” 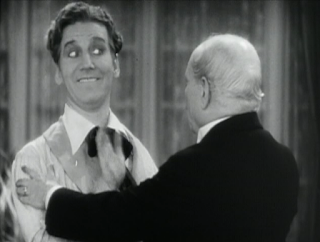 Although he begins to wonder if he hasn’t suddenly entered an insane society, Trebel gamely goes along with the doctor’s seemingly sexual approaches:

Beaudine: Will you kindly show me your chest?

Trebel: If you show me yours.

Trebel: Well then, you don’t see mine.

Beaudine: Have you a four-leaf clover on your thorax?

But when his old friend asks him to take off his shirt, stares deeply into his eyes, and hold his hand—preparing to hypnotize the man he is now certain is Noblet—Trebel makes it apparent that there are limits: “I may be a hairdresser by that doesn’t mean I hold men’s hands.” When, soon after, the doctor switches off the lights, Trebel demonstrates that he has been right to have his suspicions about the doctor.

Returning to his former self as Noblet, he is even more confused by the constant embracement of Juliet’s friend and maid, who angrily assault him for his sudden attentions to his new client Juliet and implore him to run away with them.

The obviously more chaste Noblet prefers the company of his dear friends and a nice hot bath. And we gradually begin to comprehend what these two close acquaintances might have meant in their proclamations of “Oh what a man!” If Trebel was clearly more of a woman’s man, with all the sexual connotations that such a phrase might conjure up, Noblet was obviously more of a man’s man, allowing for all of the associations that might cling to that term.

Yet he insists also upon his rights to enjoy his own bed with his wife, which neither Juliet nor her current husband Croton can deny him given the doctor’s warning that the full truth would result in a shock which might kill him. 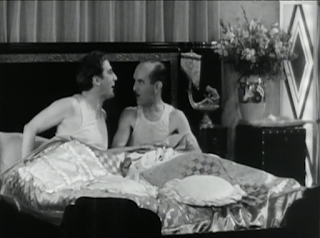 Neither of Juliet’s husbands, former or present, can stand one another, and finally, being ousted not only from his rights as a husband but from his own bed, Corton challenges the unperceiving intruder to a fight, the two stripping down to their undershorts as they sit and, almost as if forgetting their pugilistic intentions, crawl together under the covers. On cue, Trebel’s wife Sylvaine, convinced her husband is cheating on her, barges into the room, asking the obvious question: “What kind of a house is this?”

The truth gradually comes out, and Noblet/Trebel must decide which life he intends to live, the happy married “manly” man or the joyously effeminate womanizer. When Noblet asks just what kind of man Trebel was, the doctor responds: “You were gay, a bit dandified.”

Perceiving that Juliet is happy in her new life and that he has four loving boys back in his house, he conspires with the doctor to pretend to hypnotize him again in order to turn him back into Trebel.

And true to Trebel’s nature, as Noblet leaves he turns to his unwelcoming host, suggesting that he would someday like to give him a “shave.” A slave suggests not only a razor being applied to the hair on one’s face, but has long meant in urban slang, “To take a penis into hand and rub it up and down one’s cheek, mimicking the movements of the razor or shaver.” And, of course, he is also suggesting something of danger, as in a “close shave” of the kind Sweeney Todd applied to his customers.

So we arrive at the situation I described earlier in which the sexually open hairdresser cannot quite remember the names of his children. It doesn’t seem to matter, since everyone loves him. The queerer of his two personae, in this case, is preferable to the more normalized if charming “man’s man.” A man who loves women and men equally wins over everyone.