Sorrows, US expatriate director Gregory J. Markopoulos’ 1969 film, shares his earlier films’—Bliss (1966) and Gammelion (1968)—fascination with significant structures and the lives of those who lived in or constructed them.

In the case of Sorrows, the mansion, Villa Tribschen, filmed from the outside and inside, viewed from a cold, frigid landscape, and within with the warmth of furniture, sculpture, art, and windows which provided natural light from all four sides of the house on each level, was built by King Ludwig of Bavaria—most often described as the “mad” king—for the composer Richard Wagner.

If Luchino Visconti’s great film is to believed, Ludwig’s madness consisted mostly of loving music, particularly the operas of Wagner, architecture, and attractive boys, as well as believing he could offer his citizens culture instead of politics. All very dangerous, apparently, and very expensive, particularly given the costs of the wars his advisors preferred to support. And clearly it is just Ludwig’s loves that has attracted the director to this house, along with the sorrows that both Ludwig and Wagner were made to suffer for their pursuit of the arts.

The first half of this film, the entire scored to a motif from Beethoven’s Eroica symphony (Symphony No. 3 in E flat major), moves rhythmically back and forth with frames depicting the surrounding fields of snow, barren trees, gray skies, and the outer shell of the house in Lucerne. Alternating with these momentary images are patterned patches or blots of color or black and white without the structures to which they were originally attached, representing, in those moments, something like George Seraut’s paintings in reverse, instead of the blotches of color building up figures and architectonic patterns, the pattern’s figures giving way to the residual colors, blacks, and grays. 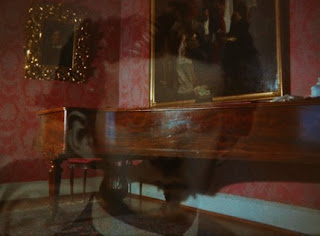 When Markopoulos’ camera moves indoors, the images become more central, the colors richer in depth are overlaid with white sculptural images, the scored music sheets of the “Siegfried Idyll,” and a painted portrait of Cosima, Franz Listz’s daughter, the former wife of the noted Wagner conductor Hans von Bülow, and later Wagner’s wife. The house, accordingly, was filled literally itself layered with sorrowful (and sometimes joyful) music and affairs of the heart, which Markopoulos visually portrays by turning his images themselves into pulsing in time with the musical composition. As Art Forum writer Rebekah Rutkoff observes, “the overlapping dissolves build in clusters with increasing layers and blinking force around the lengths of vertical windows.” The director himself describes how the film was “scored” to the music which accompanies it: “Each phrase is composed of certain frames that are similar to the harmonic units found in musical composition.”

The result is a bit like the pulsing hearts—Wagner’s, Cosima’s, von Bülow’s, and, of course, Ludwig’s from his nearby castles of Hohenschwangau and Neuschwanstein. Love and death, just as in Wagner’s great operas, are the themes of this inside/outside tribute to the house Ludwig built to his symbolic and spiritual “father,” transforming him into a kind of illegitimate Siegfried, a disguised son of the gods and Wagner himself, the name also of Wagner’s real son.