Flip has apparently opened a splendid new drug store with a soda counter that has clearly attracted everyone who is anyone in town. Among the special guests for its opening are cartoon renditions of Laurel and Hardy, Joe E. Brown, the four Marx Brothers, and Mae West, all playing pretty close to character. Joe E. Brown swallows down a special by opening his large mouth and consuming it all at once. Upon the arrival of Mae West, Harpo goes on the run after her, with the brothers following behind. Flip’s new place, unlike his previously disastrous lunchroom and barbershop, seems to be a great success. 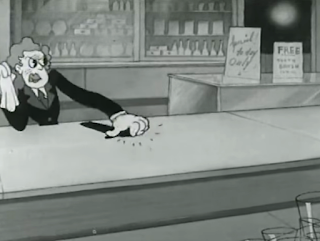 That is until an obviously gay “nance” shows up attempting to get Flip’s attention while he’s busy serving up something special to Mae. The pansy drums his fingers and flaps his hankie, calls out to Flip, and almost has a pernickety fit before he finally gets the frog’s attention, ordering up a chocolate soda. 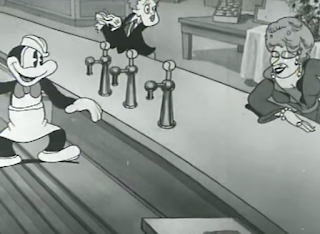 Still distracted by Mae, Flip spoons out an impossible assortment of ingredients, including at one point what appear to be a bag of tacks, mixing all together in an elixir of odd assortments that get a final soda squirt before being served up to the thirsty purse-lipped man with rouge dots on his cheeks.

When it finally arrives, he drinks it up quickly and covers his mouth to disguise an obvious belch of indigestion. But something more terrible seems to be the problem as his polite demeanor suddenly turns into a fierce display of his teeth, and he stands up with now a fully hairy body. Like Dr. Jekyl and Mr. Hyde our prissy queen has suddenly transformed into a version of Wolfman who just as quickly goes berserk, throwing the room’s objects at walls and roaring in horror, as even the opera-wrecking Marx Brothers bend down out of site and Flip goes on the run with various contents of the soda counter being thrown at him and crashing through the walls. 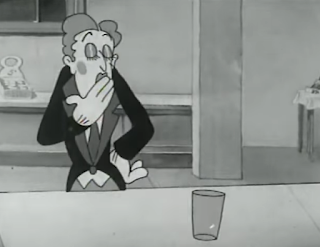 He finally captures Flip and lays him down on the puff of a gigantic bottle of Eau de Pansy as he straddles him in a manner that suggests some terrible sexual perversion, with Flip’s feet pushing up against his now hairy legs. 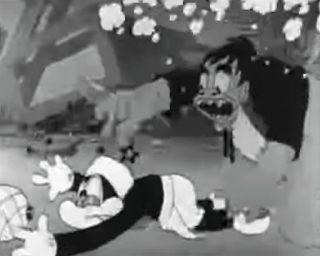 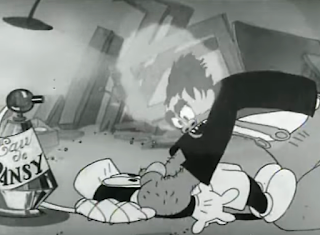 In this horrific depiction of homophobic terror it is quite apparent that even the most popular of cinematic forms, animation perceives the homosexual—as I have observed in my essays on Paul Wegener and Stellan Rye’s The Student of Prague (1913), Norman McLaren’s Narcissus (1983) and several other films—as a kind of double, in this case as a neutered overpolite male who can just as suddenly turn into a brutal beast in his sexual lusts, a being who, in love with himself, is a kind of Gemini who contains another within who is the opposite of the pose or the cover of the man who appears normal on the outside but lives a closeted “other” life at night. You only need to cross his path before you may discover that terrifying other he keeps within himself that is certain to destroy all those with whom he comes in contact.

And just as suddenly, our Wolfman turns back into the sissy, who leaves behind an entire destruction of formerly normative world, Flip ringing up the register to read “No Sale.” 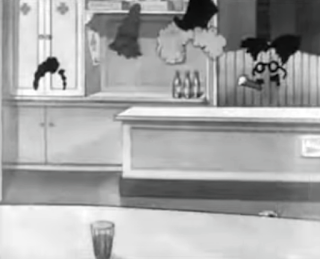 It’s strange in this cartoon that the silly handkerchief-waving emasculated visitor turns into such a powerful creature than even stolid representatives of gender such as Mae West disappear, the Marx Brothers are scared out of the disguises, Joe E. Brown howls out in fear, and Ollie begins to cry.

If you ever wondered why heterosexuals were once (and still are in many cases) so very afraid of LGBTQ people, you need only watch this child-like fable. The nance, sissy, pansy, whatever you to describe him as, is one of the most powerful and seemingly destructive beings in the world in his ability to transform himself.

Posted by greenintegerblog at 2:14 PM