In only 12 minutes British-born director Peter de Rome in his 1972 film Underground reveals something about gay sensibility that is often difficult for gay men to openly talk about.

This film is about sex, which is not something that most gays would be that hesitant to discuss in a safe environment since one of the major things that defines their lives living in a society where they are a minority in that they are attracted to people of same sex and enjoy their sexual experiences with other men.

No matter, perhaps, in nearly every respect they might share many if not most of the same experiences, lifestyle, and behavioral patterns of any average heterosexual male, it is this one small difference that often comes to define them in a society that often, even today, dismisses, mocks, excludes, and is violently opposed to the very idea of their sexual orientation. One can look very much like another male individual, work at the same job, enjoy the same daily non-sexual pleasures, wear the same clothes, share similar politics and world views, be raised by similar families in the very same town as any other male, but because you like to have sex with those of your own gender you are automatically defined by nearly anyone else in the society—whether they claim it as something of no great significance or greet with great hostility—as someone who is “different,” and therefore outside the norm. Perhaps only skin color, gender, and obvious disabilities more clearly define societal differentiation and “normative” acceptance.

Being LGBTQ you are born into the world as an outsider simply because of your sexuality, which makes it clear just how important in our lives sex is seen to be. For the gay man, accordingly, sex is almost by definition an act that lies outside of normal behavior, which absolutely permeates the gay and most LGBTQ sensibilities. And for many years, and even now in numerous situations, gay sex is a taboo sex, something that needs to be hidden from the surrounding heterosexual world. Encountering another gay individual to whom you are attracted, particularly in a heterosexual space in 1972, accordingly, requires a highly coded language.

If you are a heterosexual man or woman seeing someone to whom you were equally attracted, you might wink, bow you head in their direction, smile, put your hand on your heart, throw a gentle kiss, even approach the other. As long as you don’t exaggerate these gestures or actually accost the other being, if mutual all of this is perfectly acceptable in full view of those around you. If read by others it is generally perceived as something inevitable and even charming.

For a gay men, however, there is a very different set of rules. First of all you have to determine whether or not the other male to whom you are attracted shares the same sexual orientation. Although many gay boys may claim to have “gaydar,” there is no such thing. What they are actually saying is simply they are cleverly alert to how others around express themselves through body language. For gay men it may be a slight widening of the eyes, a self-satisfied smile, a subtle stare, or even a looking away and around at the others seated or standing near you as if to check out the space. Are others watching or ignoring the two of you? No heterosexual male would bother to check out the territory unless there were a number of children in the same car. Perhaps a slight rising of the chin, a slightly contradictory gesturing of a mix of unspoken the words, “come here” or “are you interested?” A hand passing quickly over the cock might pose the same questions. Another stare, but in case it produces confusion, a quick shift of the eyes away from the object of desire. Maybe a careful lick of the lips. A finger to the nose: “you’re on target.” Or a dozen other almost imperceptible gestures that mean something only if repeated by the other, particularly the stare, the brush of the cock, the lift of the chin. A hand brushing through the hair. All of these are carried out at the same time that both parties are forced to look away from one another, suggesting absolute indifference, just in case someone might have intercepted their codes. It’s amazing just how patient one has to be send a message to each other about how eager you are to get together and have sex.

These are codes, and there is almost a joy in subtly playing them out and in having them properly read, particularly when the others around do not know how to read them or seem to have absolutely no interest. If the feeling is mutual and similar signals are returned by the other, you might find a way to move nearer each other, but carefully. A too sudden or obvious approach would surely be observed by those who might negatively judge it. 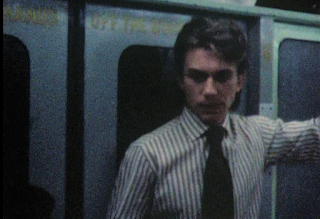 The figures in de Rome’s Underground (Lee L’Ecuyer and David Lejeune) both make these signals, despite the fact that the one is obviously a suited businessman and the other long-haired, casually dressed slightly rougher type. Moreover, the messages are clearly received, the long haired cutey rubbing his cock several times to show is special interest about getting together as soon as possible.

In most gay films as opposed to gay pornography that would be where it ended, or, as in de Rome’s earlier piece from the same year, Daydreams from a Crosstown Bus, the meeting up and sexual encounters played out in the imagination, in de Rome’s film in various alternating ways. 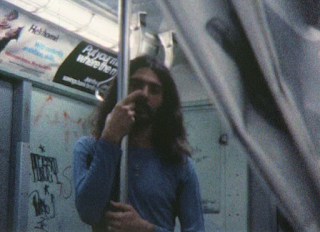 But Underground is shot in a real New York subway in real time with covert camera men weaving in and the actual riders. And what the film reveals in taking the sexual invite to the next level may be shocking to some viewers, but almost inevitable given the social restrictions placed on gay life, a kind special thrill that not many gay men might admit to.

Obviously straight men and women are also turned on by public sex, particularly on subways, trains, busses, and planes. I can immediately call up scenes from a few Hollywood movies such as Risky Business, North by Northwest, and Silver Streak as examples. Illicit sex in public transportation is quite simply a sexual turn-on. 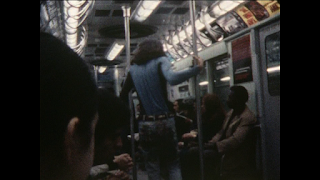 Yet when in de Rome’s Underground the more casual dude begins to walk down the length of the car away from the man he has just sexual aroused, we recognize an almost necessary conclusion to such  a gay situation. Since these gay men are already outsiders, who have just communicated their lust for another secretly in front of dozens of other everyday citizens, they might go “underground” full hog. Once one has come to terms with being a societal outsider who is forced communicate in public in a private language it is very easy to push the envelope just a little further by actually going through with the sex right there in the subway. The businessman knows precisely what’s happening when the other walks off. He follows as they make their way through several cars, moving on the very end of the train where no one else has thought of entering, a kind of “dead end”—a natural location for a gay man which de Rome signals in his 1969 film “Double Exposure.” There the true thrill waits: the full act of gay sucking and fucking in public. It is not just that it is obscene and improper as it would for the heterosexual also, but it is deemed as unnatural, against the law, and unthinkable for the heteronormative world. 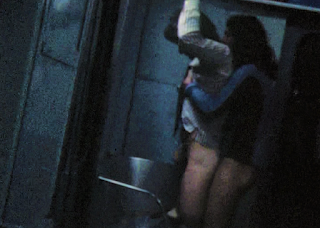 De Rome describes the rush he felt while filming somewhat like what it must have felt for the two actors performing the actual sexual acts. Filming it illegally on the subway, they were allowed only one long shoot, which they did, moving back through the cars to the final one quickly as De Rome became so involved with the two figures, the businessman going down on the blue-jeaned hippie and finally turning around to be fucked, he hardly noticed that some riders other than his camera team had actually entered the car and were eagerly watching the goings-on. And why shouldn’t they? For suddenly everything that the gay world has been told is impossible and verboten suddenly is revealed openly to those willing to follow the clues, much as the characters do who witness the “Second Coming” of his movie of that name.