how to make films without really trying

I imagine that I might be able to write a long essay on short films that fall under the category of “How to Make Films without Really Trying,” but I’ll just discuss two works here that represent to me young filmmakers, obviously with some talent, refusing to truly engage the medium in which they have claimed an interest. Both the 2016 4-minute short by US filmmaker Robert Guthrie and the 6-minute work by another US young would-be director Kye Jackson “set up” situations that are never developed, as if further narrative exploration of were of no matter.

The glibbest of these is Guthrie’s Easy which appears to be almost delighted to say “nothing happening here dude, so don’t worry” in his tale of two biblical friends David and Jonathan. Ensconced in a seemingly perfect urban neighborhood, the two tall boys, David (Connor Gerton) and Jonathan (Zachery Prescott) get dressed in the morning—David, since he wears a small silver image of a Torah around his neck obviously Jewish, and Jonathan, who dons a small cross, evidently Christian—to go about their day. David, walking down the beautifully wooden stairway enters the bright daylight to make his way to work at a local coffee chop, while Jonathan, sliding down a pole near his family’s equally smart-looking stairwell, passes by his father (Barlow Adamson), who, reading his I-phone on the couch, seems a bit grumpy when his son announces, “See you late tonight.” Observing his somewhat disapproving demeanor, Jonathan suggests, “You know, you could be happy for me.” His father, still glowering a little, shoots back, “And you could be grateful for some tolerance.”

End of story. Jonathan’s father is clearly not as easy about his son’s relationship with David—whose mother, we soon discover, has invited Jonathan over to the house for dinner that night—as is David’s family, the mother (Anne Gottlieb) telling Jonathan when she meets him outside her sons’ shop, how much they are looking forward to the dinner with them that evening. 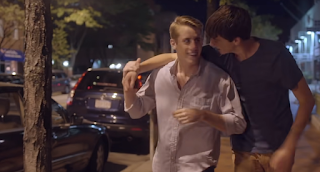 David finishes up work and heads off to the dinner appointment, meeting by Jonathan on his way home, the two holding hands as they walk off to a pleasurable event. It’s all just easy, I guess, if at the worst your parents “tolerate” your sexual differences and at best, as do David’s folks, they totally embrace them. But then we know parents like David’s and Jonathan’s are not evidently in the majority even today, although we might like to believe everything has changed. Moreover, not everyone lives in such upscale urban communities as do these two boys. And if the majority of parents suddenly grew to accept or, at worst, be benign critics of their son’s gay sexuality, would it be worth making a movie about it? Apparently, even in director Guthrie’s mind, it’s still unusual enough that the situation is worthy of being represented on film.

One might almost imagine that this glib short work announces the end of, if not LGBTQ cinema making, the gay “coming out” film, since apparently there is no one left to “come out” to.

Jackson’s University of Southern California filmmaking debut, Never Too Late is, in some respects, the opposite of Guthrie’s “easy” world. This film also is about the coming together of two young men, Charlie (Frederick Hoffman) and Roger (Daniel Bruington) who meet up by the Los Angeles beach where Charlie, alone on basketball court, is fruitlessly attempting to put the ball through the hoop. Roger, with his friendly dog, is passing by when the ball falls from the edge of the hoop in front of him. He stops, bringing the ball back to Charlie and apologetically makes a suggestion of where Charlie might hold his arms before shooting. It works, and Charlie makes the basket, the two introducing themselves to one another and making plans to meet. 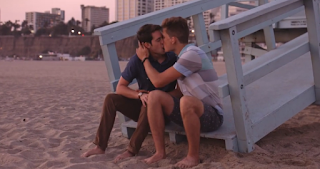 By the time they do meet on the Santa Monica beach we realize that Charlie is working at the basketball court to improve his stamina since he is apparently in ill health. Roger asks if Charlie has a girlfriend, to which the boy laughs, and “tagging” Roger goes on the run, making it clear that he is ready to play on the field of love with his new acquaintance as the film’s soundtrack blares out The Archies 1969 hit “Sugar Sugar.” The two romp for a while in the sand, ending up on the stairs of a lifeguard station for a quick kiss before Charlie pulls away, announcing from a safe distance “I’m HIV positive.”

In the next very short sequence, Charlie is back on the basketball court, with Roger at his side suggesting how to keep his feet in position to make the basket.

Obviously, Charlie’s announcement has not ended their potential relationship, but given the seriousness of the issue at hand, mightn’t we wish to explore, at least a little further, how these two might make a plan to make a go of it as lovers, companions, or just friends? In Jackson’s anything but “easy” narrative, he has only announced the situation without exploring any of the consequences, which unlike Guthrie’s work, in this story there most certainly have to be.

These two young filmmakers seem to have a flare for the visual, have chosen excellent actors, and in Jackson’s case even shown a talent for musical accompaniment. Now if only they had a story to tell, which—despite my disdain of traditional ideas of structure—admittedly does require some sort of conflict. For most directors of LGBTQ films that conflict is so apparent it drives the film from the moment the camera lens is uncapped, but these two directors seem to have simply turned off the camera off before they’ve even begun.

Posted by greenintegerblog at 10:17 AM