just below the border 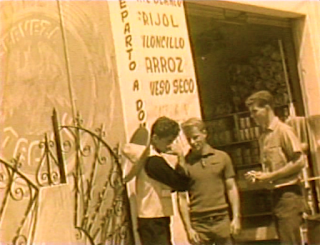 In this film, it’s back to the boys who run into trouble, switch positions, and eventually wrestle their troubles away.

Two US innocent students, exploring the Mexican border city of Tijuana, hook up with a local guy suggesting a nice club they might enjoy. If, at first, they seem to reject his solicitations, they eventually walk right into his trap. Before they even know it, he’s taken out a gun, forces them to walk to a private location, and demands they strip—even, when they still resist, their underwear. Doesn’t everyone wear a posing strap beneath their undies?

In typical Mizer fashion, when the bandit bends down to grab their billfolds out of their discarded pants, one of the boys grabs the gun from his hand and turns the tables, forcing their bandito friend to follow suit, the second boy helping him speed the strip. 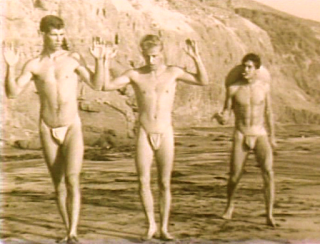 But once he has peeled down to his posing strap, he manages to grab the gun back. And since they’re all now suitably undressed, he forgets the money and forces them to march on down to the beach. With a little anticipation, we can only imagine what might be next. 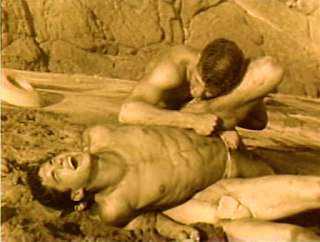 Of course, they charge at him and the three end up in a serious wrestling match in the sandy mud, showing off their buttocks and crotches quite nicely to those who haven’t been paying attention to the plot, providing them with what they were looking for in any Mizer movie: beefcake. 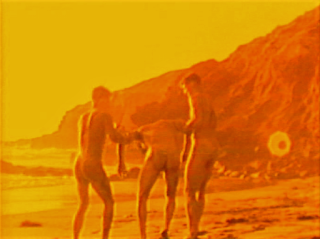 And here they get plenty of it as they pull him into lock between them, pounding his well-developed pectorals before they stand him up and together walk him further down the beach into the setting sun to....well that’s where imagination is important in these cinematic pre-porn days.

Posted by greenintegerblog at 1:54 PM