Roscoe “Fatty” Arbuckle’s 1918 short of 26 minutes is a kind of rag-tag series of comedic mini-skits which don’t entirely dove-tail into a coherent whole, but nonetheless do provide some excellent comic moments, particularly given that Arbuckle’s central comedic opposite in this work is the great Buster Keaton who plays, in the first “skit” a woman with an umbrella swept back by the horrific winds of a rain storm into Arbuckle’s post outside of a store where he is no longer allowed access to fulfill his need for liquor and in the second major “skit,” a mad surgeon who heads the No Hope Sanitarium—which contains numerous insane men and women as well, supposedly, as recovering alcoholics, which is the reason why Arbuckle’s wife has sentenced him to the place where surgery appears to be the final solution to all ills.

Keaton would in later films play a sufferer of several storms, but here, dressed as a woman who braves her way against the winds of such tempestuous force that they keep her flying backwards into Arbuckle’s arms and apparent protection, she is also seemingly abused by the giant roadblock, as he attempts momentarily to make use of her inverted umbrella as a cover to light a cigarette and, later, as holding onto her dress as the pushes her in the other direction, he helps to nearly strip her of her clothing. 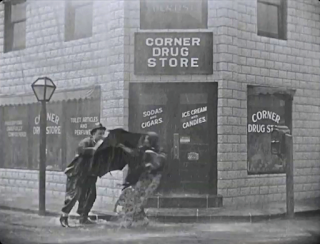 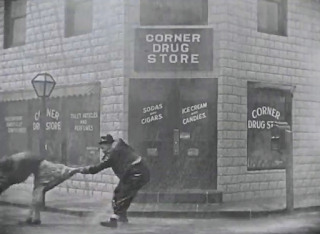 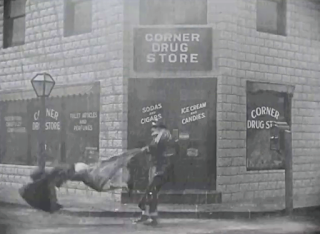 The scene also concerns a passing policeman, who seems to see Arbuckle completely innocent in a world where he is represented of taking advantage of anyone who sails by, as well as a truly inebriated gentleman of the gutter who briefly commiserates the existence of endless water without a drop of alcohol, and, almost inexplicably, a passing organ grinder, his monkey, and female assistant—the trio of whom Arbuckle invites home, which for his wife becomes the last straw as she forces him into the care of the Sanitarium.

Once in the sanitarium, from which Arbuckle is seen constantly attempting to escape, the new patient witnesses the mad Dr. Hampton, Keaton again, in a blood-splattered white coat exiting an operating room. Witnessing, soon after, a truly mad woman (Alice Lake) who jumps into arms  tempting him to kiss her, Arbuckle is absolutely certain that this is no place in which he wants to stay. About to be given a basic physical, the sizable oaf places an alarm clock under his shirt to replace his heart, and begins to chew on the thermometer, an act that, when the doctors perceive that he might have consumed mercury, truly demands an operation.

Arbuckle fights back with all his might, but the doctor and his assistants finally do strap him down and douse him with ether.

He awakes some time later and decides once again to escape from the sanitarium, bumping once more into the female patient from his earlier escape attempt. She tries to convince Arbuckle she is not crazy and that she has been mistakenly committed. Pursued by doctors into the communal patients ward, a mass pillow fight breaks out between the inmates and the guards, allowing Arbuckle and the girl to truly escape. Once in the clear, Arbuckle asks the girl if there is anything else he can do for her. She asks him to help her get back into the sanitarium. Realizing the girl is genuinely crazy, Arbuckle ditches her by jumping into a nearby pond and pretending to drown, forcing the girl to go running for help. Doctors give chase and while attempting to flee, Arbuckle finds himself back at the sanitarium.

Once there he observes the hefty head nurse (Kate Price) removing her uniform and putting on civilian clothing for a brief trip away from the clinic. Arbuckle quickly dresses in her uniform and begins a voyage down the long hall to freedom once more, but almost immediately encounters Hampton. To maintainer her cover, she waves flirtatiously at him only to discover the doctor returning his flirtations.

Indeed, in one of the most charming scenes in this short, Keaton and Arbuckle slink down the walls of the hospital gesturing back and forth with sly insinuations of love that match those of Chaplin. Arbuckle, as we have seen previously in his 1915 work Miss Fatty’s Seaside Lovers, is a quite excellent drag artists, and Keaton is just so lovely to look at that you almost want to the two to run away together and live happily ever after; if nothing else they’d be happier with one another than Arbuckle is with his current wife and Keaton with his hospital loonies. 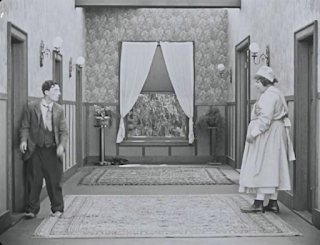 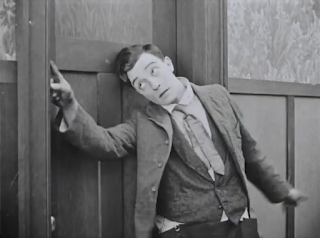 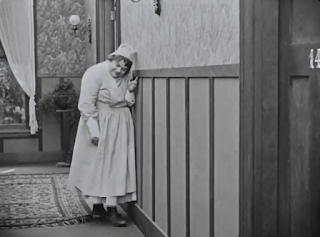 But the real nurse returns, blowing his cover, and Arbuckle is forced to race away, pursued by Keaton and his minions across a farm and onto a track where a sponsored race is already midway. So desperate is the escaped  patient that he manages to beat the other runners to the finish line and is declared the winner. He is awarded the prize money of $2,000 which he realizes he can use to buy a great amount of alcohol, but the doctors track him down once again. Arbuckle attempts to run off one last time, but is wrestled to the ground by the doctors.

The scene suddenly shifts back to the hospital bed with the doctors shaking Arbuckle awake after his operation, revealing the whole escape attempt to have been nothing more than a dream.

In this film, accordingly, we have two great silent era comics both turning to crossdressing for comic results; but whereas for Keaton being female is merely another situation, as for many of his characters, which he must endure to get through the day, for Arbuckle's character it actually provides him with new possibilities, a world of desire and love that appears unavailable to him, like the liquor he’s denied by the shop clerk, in everyday life. No wonder that even in his ether dreams, Arbuckle imagines himself in cross-dressing heaven.

Posted by greenintegerblog at 9:49 AM