Possibly one of the greats of the silent cinema and, most certainly, one of the most important of early LGBTQ films, Svend Gade and Heinz Schall’s German production of Hamlet in 1921 almost defies all expectations.

First of all, if you are expecting William Shakespeare’s Hamlet, this film immediately asks you the leave that notion behind. The work begins with a brief listing of notable attacks on the Shakespeare play by Voltaire (who, the subtitles claim, called it “a tasteless hodgepodge of caprice and nonsense”), Herder (who described Hamlet as a “habitual conniver”), and Goethe who simply rejected the drama in “the harshest terms,” (describing the central figure as a “castrated ram”). This drama posits its existence on the literary theories of Edward P. Vining's book The Mystery of Hamlet (1881), wherein he argues that the secret of Shakespeare’s plays is that “‘he’ is really a ‘she,’” explaining, presumably, why Hamlet is unable to immediately act with firm decision.

Accordingly, we must comprehend that the fascinating film that follows is based on the utter nonsense of Vining’s chauvinist viewpoint that males are inherently beings of action while females are passive and unable to engage with the aggressive evils of the world. Apparently the great writers the introduction names, Vining, and this film—the latter not yet having seemingly encountered Freudian psychology—cannot seem to comprehend a male plagued by conscience, doubt, fears, and love combined in a way that prevents him from the revenge he might accomplished had he simply testosterone enough to enact his feelings. Were not Vining so misogynistic he might have turned Hamlet into a gay man, unable to act because he was simply “unmanly.” 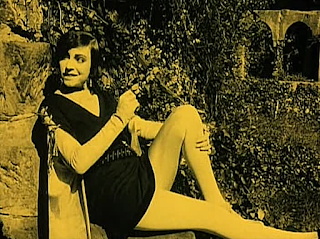 Fortunately, Asta Nielsen doesn’t present us with an entirely passive woman either, and in approaching her character as a transgender being, an individual born as a female but dressed in male clothing throughout her life and required to identify as a male, she reveals a new complex and quite positive vision of Hamlet that, even without Shakespeare’s glorious language and its representation of what we now describe as the “modern” man, is utterly fascinating and significant today for how it deals with LGBTQ issues that weren’t thoroughly delineated in her day.

Nielsen’s Hamlet is torn not only between duty and rational doubt, but lives in what appears to him as a kind of nether world of his mother’s making—the mother being the true villain of this version—in which, as he later describes herself, he “is no man,” and “can’t be a woman,” as if he were “a toy someone forgot to put a heart into.”

Yet, the truth is that this Hamlet is all too much a being of heart, of deep feeling, particularly in his love for his father, the King (Paul Conradi) and his Wittenberg University colleague, Horatio (Heinz Stieda).

Hamlet was born to Gertrude (Mathilde Brandt) as a daughter while her father and his Danish army was fighting the Norwegians, led by Prince Fortinbras (Fritz Achterberg). The Norwegians were defeated, but the King was gravely wounded in the fighting and was not expected to live. Hearing of her husband’s condition, the Queen determines to tell the public that she has borne a son, hoping to keep the Kingdom in her child’s name and thus allowing herself to continue to rule. 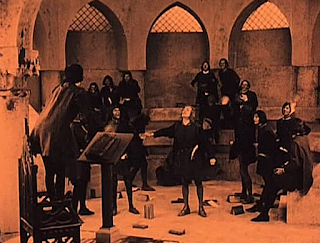 So it is that Hamlet is secretly raised as a male by his parents, particularly beloved by his father, who when the boy comes of age, sends him off to Copenhagen for a proper education at the University. There he not only encounters and develops a deep friendship with Horatio, but meets Fortinbras whom he also befriends, and watches his fellow countryman Laertes (Anton De Verdier) frivol away his money and education as a womanizer.

His friendship with Horatio becomes so close that when Hamlet is summoned home upon his father’s sudden death, Horatio joins him on his voyage back to Elsinore.

Once he arrives home Hamlet is told of the fact that the family is not only celebrating the funeral but is simultaneously planning the marriage of Hamlet’s mother to his uncle, Claudius (Eduard von Winterstein). In this Hamlet story there is no ghost to greet him, only his own haunted feelings for his father, and upon a visit to the spot where his father was found discovers that his father has died—not as in Shakespeare through a poisonous potion poured into his ear—but, so the gardener suspects, through the bite of a poisonous viper who had escaped from the palace dungeons. When Hamlet himself visits the viper pit he discovers Claudius’ dagger on the ledge, his first real clue, other than inappropriately timed celebrations and his evident eagerness to wear his brother’s crown.

The shock of these events and the return to this highly dysfunctional family would trouble any returned son, but Hamlet is now also faced by palace protocol wherein he is expected not only to play the obedient son to the monstrously incestuous couple but to woo and marry their foolish advisor Polonius’ daughter Ophelia (Lilly Jacobson). Is it any wonder that he openly determines, as he tells Horatio, to play a madman?

While Shakespeare’s prince is so suicidal that we are somewhat uncertain at moments whether his madness is related to depression or intentionally feigned, this Hamlet rationally plays a madman in an already mad world just as does Edgar to Shakespeare’s King Lear. In his madness, moreover, like the Bard’s Hamlet, he can truly mock and undermine Polonius, while resisting the attentions of his daughter. 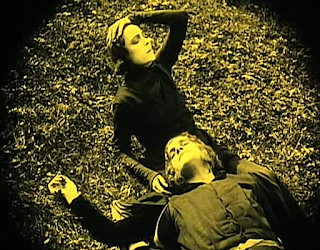 If Shakespeare’s Hamlet, in his moody shifts of love and dismissal is unkind to Ophelia, Nielsen’s Hamlet is far crueler, as he plots out his tactics against her. It is important, however, to recognize, given the fact that in this case Hamlet is also female, that he inevitably sees her as a foolish woman whose only goal in life is to obey his utterly ridiculous father in seeking out and marrying the Prince. More importantly, since her beauty also attracts Horatio, for this Hamlet Ophelia is a rival, even if he knows that a true love affair with Horatio is not possible. In order for such a relationship to occur Hamlet would need to “come out” in a way never before or since seen on film, a future King admitting to his friend that he was not just another male in love with him but was sexually a being whom he might actually have fallen in love without all the national and personal lies he has been made to suffer. Imagine having the villain of Werner Rainer Fassbinder’s Anton Saitz in the director’s film In a Year with Fourteen Moons actually coming to terms with the sacrifices of Elvira/Elvin, and declaring his love for the now transgendered female—surely another impossible scenario given the laws of fictional logic. 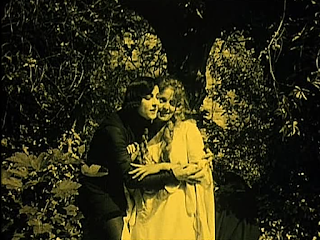 The “lesbian” scenes between Hamlet and Ophelia in the film, accordingly, are humorous and poignant both, particularly since we recognize that it will soon end in Ophelia’s suicide.

When the passing theatrical performers are called to court and given a scenario to perform by Hamlet there is absolutely no doubt in this version that Hamlet is seeking for the final proof—along with the circumstantial evidence of Claudius dagger—by “pricking the conscience” of the King. In this silent film version, with its highly gestural actions, Nielsen’s Hamlet crawls nearer and nearer to his uncle as Horatio stares him down while the actors  play out something so close to the reality of the murder of his brother, that both Claudius and the Queen hold one another tight in horror recognizing that they have most certainly been found out. 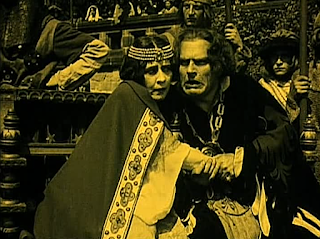 Yes, this Hamlet also, speaking out as he finally has and reprimanded by his mother for having nearly revealed their deep secret, is almost suicidal. But, unlike Shakespeare’s Hamlet Nielsen’s prince is now ready to carry out the revenge. But being a rational and loving being he cannot bring himself to kill Claudius feigning piety or perhaps praying out of faith and repentance at the chapel alter. And when he does finally act, believing his has caught his uncle spying behind his mother’s bedroom arras, he kills Polonius instead, which along with Ophelia’s suicide has the consequences of bringing Laertes home with the goal of killing him.

Claudius, perceiving that Hamlet’s sword was really meant for him, now also recognizes the danger of keeping his foster son near, and with help of Rosencrantz and Guildenstern—unnamed in this instance—sends this son with them to Norway bearing a secret message to Fortinbras to kill Hamlet immediately upon arrival.

Like Shakespeare’s Hamlet, Nielsen’s Prince also outwits them—ordering them to be killed in his stead—and conspires with his friend Fortinbras to take over the throne of Denmark. This is not a “castrated  ram” nor a mere “conniver,” but a man (actually an amazon-like woman) who has thought out an organized a coup despite its various impediments. Hardly has Hamlet returned, but he drinks his uncle under the table and sets the celebratory room—another instance in which Claudius celebrates “death,” this occasion being Ophelia’s funeral—on fire, killing the King through what appears to be smoke inhalation.

Both Laertes and Horatio fall into Ophelia’s grave with grief, and when Hamlet appears to help his friend back to level earth, Laertes challenges him to a duel. As we know from Shakespeare, this duel is not a fair one since the Queen has tipped Laertes’ sword with poison and, should that fail to work, puts out a poisoned goblet to present to her son in reward for his survival. Indeed Hamlet does win the first go, and is stabbed only because, having herself accidently drunk from the poisoned goblet, his mother cries out as she dies, he turning toward her in commiseration. 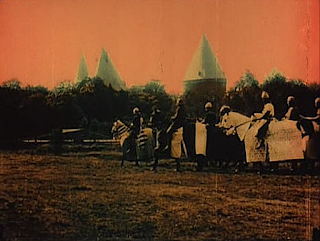 As in the original, Fortinbras and his soldiers arrive too late, just as Horatio running to his dying friend’s side discovers that Hamlet has breasts and is a female, kissing his dying friend as he might a true lover. 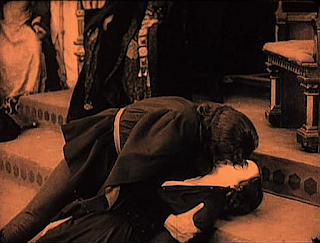 Certainly without the soaring refrains of Shakespeare’s singular language, Gade and Schall’s work often appears far too literal in its story-telling, but through its introduction of actual lesbian and what appears to be a gay love relationship it provides us complex situations never imagined in Shakespeare’s Hamlet while simultaneously exploring the possible queer corners of classic literature through a near-epic lens. There has never been another movie quite like it.

Posted by greenintegerblog at 3:42 PM