Alfred Hitchcock’s 1930 film, Murder!, his third “talkie,” might be described in terms of its narrative as an odd mix of Sidney Lumet’s 12 Angry Men (1957), with elements of George Pollack’s comic Murder Most Foul (1964), based on Agatha Christie’s novel, and an after-trial continuation of the murder case that might remind one of Hitchcock’s later Dial M for Murder (1954)—except all of those films are far superior to this predecessor.

One might suggest that it was his inexperience with cinematic sound that presented Hitchcock with problems that he couldn’t easily resolve, except that his 1929 film Blackmail, generally described as the first British sound film, is quite successful using the new medium, and, at moments, is quite brilliant. Yet for most this film the action is constantly stilted as if the actors, after saying their lines, were waiting for further direction of where to move their bodies.

At moments figures move about in space quite aimlessly, and at other moments, for no apparent reason, they remain inert. A rolling dinner cart almost crashes into the film’s major actor, Herbert Marshall who plays Sir John Menier with utterly no logic except that he stands in his butler’s path. At other times, he leans forward as if he were as pondering some directional gesture which he hasn’t yet decided whether or not to share with his audience. After a day of searching out the location of the original crime with his bumbling stage manager friend Edward Chapman (Ted Markham) and his empty-headed wife Doucie (Phyllis Konstam), Sir John seems unable to even make up his mind to enter the house of the local constable where it’s been arranged that he is to stay, or whether to pursue a dinner at the local inn, before, as if on second thought, he quickly changes his mind and enters the house. Although we might explain his indecision by the next morning’s adventures with the constable’s several impetuous children and his absurdly incoherent wife (played by the wonderful Una O’Connor). In short, time and again, what we hear and how the characters move in space seem to be proceeding in opposite directions. 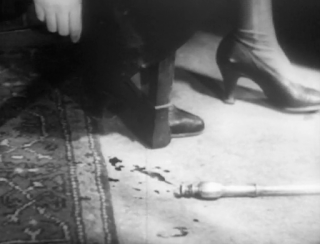 Part of this maybe simply a product of Sir John’s own inability to act or come to conclusions when, at the same time, he knows he must desperately do so quite quickly in order to save a woman’s life. He has been a member of the jury which has found Diana Baring (Norah Baring) guilty of the murder of her fellow thespian, Edna Druce, who is discovered after numerous bangings, murmurs, and shouts is found with a fire poker at her feet, blood upon her dress, and sitting only a few inches from where Edna lies dead. She explains simply that she can remember nothing about the incident, that the two were simply having dinner when the event apparently happened which she is unable to recall.

Knowing that the two were long enemies, Diana seemingly envious of the younger actress, the entire theater company is convinced and ready to testify that she is the murderer, and the jury, which consists of three women and 9 men instead of 12 males, is easily swayed by their testimony. Except for Sir John, who attempts to argue for her possible innocence but is prevented through an amazing scene in which Hitchcock uses the juror’s previous arguments and their increasingly louder choral chants of “guilty” in order to finally break down any possible arguments he might possibly provide. Unlike Henry Fonda’s character in the Lumet film, Sir John is unable to convince anyone of his doubts, some of which are disturbingly personal, since the young woman accused had first approached him about acting in his company, he suggesting that she first get some more experience in a provincial theater company such as the one she has joined. Obviously, in the US no lawyer would ever have permitted such a man to serve as a juror, but it doesn’t seem to be a problem at all for British justice as presented in this film. 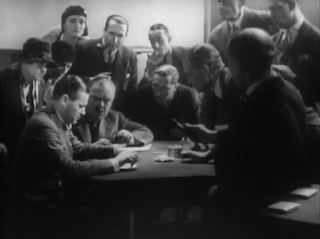 Nor does it seem to be pointless for Sir John to take up the case and attempt to solve the mystery after the murderess has been found guilty and sentenced to death. Quite inexplicably, he hires the former stage manager, Markham and his wife, to help him seek out the “truth.”

If in Murder Most Foul the wonderful Margaret Rutherford appears to be a bumbling amateur who underneath is a marvelous sleuth, Sir John appears to be a wise detective but is actually incredibly incompetent, focusing quickly on certain clues, such as the fact that Doucie has seen a policeman who just as suddenly disappears to be replaced by another policeman arriving from the other direction. The actual murderer, we immediately deduce was costumed as a policeman. He also quite suddenly concludes that, just as she claimed, Diana did not consume the brandy, the criminal perhaps having drunk it in her place, although that clue doesn’t lead us anywhere expect perhaps to suggest that the real murderer was nervous.

And he misses many other clues that any intelligent viewer might readily pick up: a broken wash basin, windows in the dressing room that the criminal shared with another actor that face the back of the residence where Diana and Edna were dining, for example, hardly register as having any significance.

He makes a strong case that what the landlady heard as a woman’s voice may have been that of a man pretending to be a woman, which makes sense when we later discover that the suspect has performed several roles dressed as a woman in his plays; yet nothing is truly made of that fact in the end, and it has no particular bearing on the murder except that it probably served as a temporary disguise for the two dining actresses. No one else apparently had observed him in woman’s attrie, and after the murder he escaped as a policeman as I mention above.

Later, suspecting a fellow actor, Handel Fane, Sir John attempts to trap him, as Hamlet did his uncle through the player’s “Mousetrap,” which fails spectacularly when the suspect realizes that there is no script with which he might orally reveal his guilt.

Sir John, moreover, makes no connection, which we immediately observe, between the suspect being short in stature and his skill upon the trapeze (which we observe immediately after this scene), both helping to explain how he might crawl through the small entry spaces of enter the room.

Yet, even that would not truly matter, for by that time we have discovered a possible motive through Diana’s unintentional jail cell-revelation that what Edna was about to tell her—a fact she already knew and had no intention of hearing from her rival—was that Fane, the man who apparently loved Diana, was a half-caste. Suddenly with this “shocking” news, apparently, we are to comprehend why he murdered Edna: to keep his being half-black a secret and even why Diana might have possibly killed the reveler of that information, to protect him. The racist aspect of Hitchcock’s filmmaking is possibly the only real shocker to this tale, since it also truly doesn’t have much to do with his real murder motive, although the plot as recounted by Sir John wants you to believe that is the case.

What we begin to perceive throughout, is that everything we hear, including the constantly repeated conclusions of Sir John, means little in comparison with what we visually observe about which nothing at all is said. Voices can be imitated; stated conclusions can be meaningless; a slip of the tongue misunderstood to mean something else. All the bangs, shouts, and murmurs in the world do not tell us anything about the living or the dead. Like Sir John, himself, words get in the way with the action and slow things up. 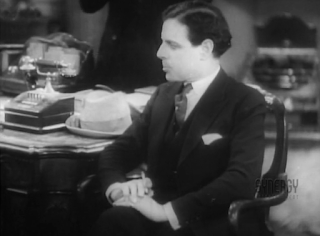 The clever director seems to have other possibilities up his sleeve that might possible even erase Sir John’s explanation, and certainly might redeem his and his wife Alma Reville’s scenario. What Sir John never seems to realize, perhaps because of his own rather priggish, Wilde-like manner of speaking, but which we immediately recognize once, late in the play, we actually meet Handel Fane (Esme Percy) is just how effeminate he is. He might have expected something of the sort, given the suggestion that he is an experienced theatrical crossdresser; but in the play in which he appears in disguise in a dress, the dress is later worn, in a switch of the situation, by another male thespian of the group, and we make little of the fact.

But I believe any gay person might immediately sense that the character of Fane in the “flesh,” so to speak, is rather queer. But soon after Hitchcock takes that much further, finally revealing in the penultimate scene of the story when Fane finally appears to perform his trapeze act, that he does so dressed in full drag, a white women’s decorative bodysuit, covered with a robe sprouting long white feathers, topped by a feathered headdress that makes him seem like a figure out of the follies bergère rather than a typical macho circus highwire artist. There is not reason for a trapeze artist to wear such a costume except for his own preference. 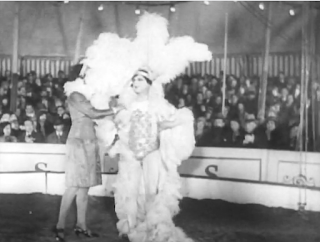 Suddenly seeing the character if full drag attire we recognize that if he is a societal outcast because of his mixed racial blood, he is even more of a social outsider and, according to British law, a criminal given his evident homosexuality. If Diana already knows of his racial background, what she may have been attempting to block out by putting her fingers in her ear is that her apparent would-be lover is also a gay man—surely a far better motive for murder to a man pretending to be a heterosexual in love.

When knowing that he is now trapped, Fane ties the return rope into a noose, interrupting his descent to the sawdust below with a hanging, nothing more is ever uttered about his motives. We needn’t hear Sir John, who previously seemed dense to the fact, reiterate what he have seen for ourselves. In this somewhat clumsy transition of a formerly visual only medium into an era of sound and more complex narrative, Hitchcock says everything he needs to say through the film’s images rather than the endlessly dry speculations of a bumbling actor trying out his talents as a detective type.

To clear it all with the censors, it appears, the director closes his strangely silently-biased movie with another staged scene which reveals that the author of the play based on his efforts to save his heroine, has fallen in love with the second victim of Fane’s deceit. Surely as Sir John takes his fellow actress into his arms at play’s end a heterosexual marriage outside the fallen curtain will inevitably follow and the world returned to normal.

Posted by greenintegerblog at 1:58 PM