Since 1980, probably more than any other topic of LGBTQ-interested films has been the issue of “coming out.” The difficulty, so complex and varied, of identifying one’s sexuality and then expressing that identification—that compulsion, that desire, that fulfillment of oneself, however you want to describe it—has over the years become one of the fascinating of topics for both creators and their audiences. By now, one might imagine that the subject has become so clichéd that directors and viewers might have bored of it, yet each year young filmmakers and LGBTQ audiences seem fascinated by the endless variations on the theme. Each “coming out” process is different, and thus almost comes to identify the character who is undergoing or, just as often, resisting the process.

As I have already noted in several previous essays, however, not only have there been at least two major different traditions of “coming out” films, which I have described as C-1 and C-2 variations—the first basically expressed pre-1980, and the other after that rather arbitrary date—but young directors have riffed on the theme in many clever ways, Icelandic director Runar Þór Sigurbjörnsson in Hann (Him) (2018), for example, suggesting the notification to parents can be as simple as leaving a handwritten message describing the proper pronoun of the person he is dating and New Zealand filmmaker Stewart Main in The New Suit (1985) arguing it’s as easy as enduring your estranged parents’ purchase of two new dress suits, then skipping the prom, to take in a local movie and meet “a tall dark stranger.” For the young boy of US director Michael Burke’s 1998 Fishbelly White it means biting off the head of his beloved chicken. To several such as Norwegian cineaste Frank Mosvold, as expressed in Kysset som fikk snøen til å smelte (A Kiss in the Snow) (1997), British director Gabrielle Russell in Keel (2004), and Danish filmmaker Lasse Nielsen in Dragen (The Kite) (2015), it begins with an impetuous but gentle kiss from a friend. To many other film creators it is a violently pitched battle taking place in the inner self or in connection with family or school mates that leaves psychological scars for years, a singular dramatic series of incidents that makes the subject so very fascinating for those attracted to expressing narrative through moving images.

In the two examples I’ve selected to talk about in this essay the issue is so fraught with complications that the “heroes” of these films hardly dare to speak of their choices, revealing them through their acts, resulting in calmer conclusions than we might have expected. And oddly, the results, if awkwardly and comically, are rather gracefully achieved.

The first film, British director Andy Nicholls’ Straight Out (2011) complicates matters by setting his story in a future in which society is quite the opposite of today’s heterosexually dominated world. In this Brighton of the future, the most common sexual pairings consist of men and men and women and women, the “pinks” clearly in control of a society spouting all the moral clichés that today we hear from heterosexual zealots, preachers, and even gay-friendly straight couples: dining with their new straight neighbors, Mark (Tim Pieraccini) and Sam (Murray Hecht) are surprised that the heterosexual pair who they’ve invited for dinner have been together for 19 years, almost as long as they have. They are amazed that the straight couple have stayed together as long as they have. When the straight couple subtly refer to their sex life and show a bit of affection for one another, the gay men suggest that such behavior may be inappropriate since there are children sitting at the table (“must you flaunt it?”), although the wife reminds them that “they’re our kids.” 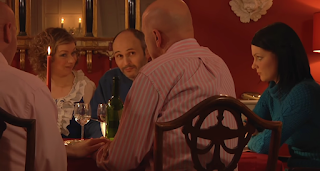 The gay couple’s son Elliott (Rob Leach), they announce, has just gotten a job in a sports shop. But they’re quite embarrassed that he wants to become a car mechanic (“of all things”) “and now he wants us to buy one.” When Elliott finally appears, the friends’ boy Bob warmly greets him while their daughter remains quiet, obviously attracted to him. We know, in fact, that Elliott fears he is straight; he’s called a hot line the previous evening hinting that “a friend” of his is afraid he’s straight and is most unhappy.

He’s told by Mark to go clean up, coming out of the shower to discover the neighbor’s daughter, Jenny, in the hall waiting for him. They are in the midst of a kiss when Sam catches a glimpse of their actions, dropping a plate in complete startlement.

In the very next scene, Elliott, seated between his fathers, explains he can’t help it, “it’s just who I am.” “Have you ever....?” “No!” the boy responds.

“How do you know then? It’s probably just a silly crush.” But his other father, Mark, is far more outraged: “Well, you’re no son of mine. I’m going out. And when I come back, I’m not sure I want to see you. After all we’ve done for you.”

Just like the stock heterosexual parents of the thousands of such gay “coming out” films, so do the “pink” parents behave badly in response to their son’s sexual unsurety.

Sam attempts to reassure Elliott that, although they are in shock, they still love him, his implorations sounding nearly as empty as those expressed by heterosexual mothers to their homosexual sons since time immemorial. “He’ll come round,” Sam assures him, as we hear Mark, on his way out the door declaring “It’s just not natural.”

Their doctor assures them that, “well, it’s quite natural.” Some boys, I’m afraid we find are attracted to girls, temporarily, but others...well only to girls.

When he meets up with Jenny once again, she’s with two gay women, obviously having changed her mind, or had it changed for her, about her sexuality.

Elliott seeks out a straight bar for the very first time, but can find no one there to whom he might possibly be attracted. Surprised, he encounters the straight neighbor’s son Bob (Richard Pennifold), Elliot saying the obvious, “I didn’t know you were....” “Straight?” he responds, “I’m not. I sometimes come to these sort of places. You’d be surprised who I get picked up.”

After a few drinks and Elliott has still not found anyone he fancies, Bob suggests they go to his place, to which Elliott, somewhat uncertainly, agrees. Perhaps, he mutters to himself, I should check out the other sex before I make a final decision. They hold hands and walk off together, Elliott having obviously regained his sense of “the way things ought to be.” 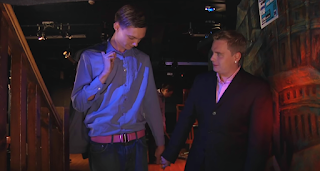 Morgan Jon Fox’s The One You Never Forget (2019) represents a much simpler series of unexpected reversals. In this case a young boy, Carey (London Curtis) growing up in a nice US suburban home, is about to go out on his first major date, his mother (Tasha Smith) attempting to pump the information out of him about who’s the girl. Carey refuses to answer, coming in from mowing the lawn to brush his teeth and, apparently, begin to ready himself for the evening’s event.

Husband (Charles Malik Whitfield) and wife, meanwhile, recall their first date years ago. She’s still angry that they didn’t get a picture; evidently her mother did not at all approve of her dating the man she has lived with ever since. They hug. He still remembers her pink dress, while the camera alternates between the loving couple and their son Carey, now shaving. “Baby make sure you get a picture of that boy and his date, okay?” She’s on her way to work, reminding him again to “get the picture.”

We watch Carey in a nice dress shirt put the tie around its collar. He sprays his mouth his breath freshener. His father is on the couch folding clothes when Carey enters in his suit coat, looking like a handsome young teenager dressed up for the special night.

“Hey, look at you! Looking all sharp.”

Carey pauses, smiling for his father’s approval. “I gotta go.”

His dad asks if he isn’t going to bring the girl in to introduce her. “Dad, no,” insists Carey.

“I’m not asking,” insists his father. “I want to meet our prom date.”

Before his father can even respond, Carey insists he’s got to go, and leaves the house, closing the door behind him. A car has pulled up, and a boy in a baby suit comes out, attaching a carnation boutonniere into Carey’s suit. The father peers through the window, a bit startled but nonetheless comes out, camera in hand, demanding they get back out of the car, they meekly waiting for what they can only fear will be some negative reaction.

“What’s your name?” he asks the young boy.

“You golfing buddies. Or is this your prom date?”

The father has promised his wife to get a picture, and, as he reports, he’s determined to get one. They smile as he snaps the photo, handing Carey a boxed red carnation corsage, the boys sitting in the back sit of the rented limousine, ride through the streets a bit taken aback, before openly smiling, Shawn Mendes’ song “Life of the Party” playing out the credits.

I didn’t tell you, Carey and his family are black, Hunter is a scrawny, white blond. 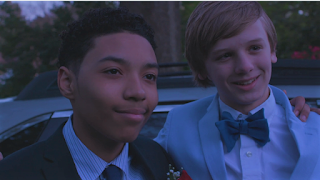 Neither of these works represents great filmmaking and, to be honest, if you’ve seen hundreds of teenage coming out films, as I have, it’s difficult to be excited by the subject. But I have never lost interest in the almost always touching works of this genre, and these two have served it up with some rather clever twists.