Mauro Bolognini | La Giornata balorda (From a Roman Balcony) a.k.a. A Crazy Day and Pickup in Rome

a pair of jeans, a shirt, a tuft of hair

Pier Paolo Pasolini and Alberto Moravia (story, and with Marco Visconti, screenplay), Mauro Bolognini (director)  La giornata balorda (From a Roman Balcony) a.k.a. A Crazy Day and Pickup in Rome

In the post-World War II world of the 1950s and early 1960s as portrayed in the writings and films of Alberto Moravia, Pier Paolo Pasolini, Mauro Bolognini, and so many others young males in their late teens and 20s, unable to find employment, wander the streets of Rome, Milan, Naples, and even smaller Italian cities in search of jobs, a quick financial fix through a petty theft, male comradeship, and a little female pleasure. The latter is hard to find, despite the eager, attractive, and lean bodies these boys often offer, because the women themselves have been forced into prostitution, or jobs such as manicurists, secretaries, entertainers, waitresses, or other low-paying positions which primarily consist of offering up sexual services to their employers.

Without money, they go hungry; without love they have no will left to go on to the next day and repeat their fruitless search. Sometimes they get lucky, finding a temporary job, a small heist which they sell off  to a middleman, and, when frustrated sexually, sharing the bodies of their fellow male companions.

In films such as Federico Fellini’s I Vitelloni (1953), Bolognini’s The Big Night (1959), Luciano Visconti’s Rocco and His Brothers (1960), Pasolini’s Accattone (1961), and so many other films, we see this often misogynist mix with the equally poignant pattern played out again and again with both sexes. It sometimes appears that all Italian youths have to offer is their own bodies, or, as the character Freja (Lea Massari) describes it in Bolognini’s 1960 film La giornata balorda (A Crazy Day), the hero is only “a pair of jeans, a shirt, and a tuft of hair.”

But what a handsome combination of that is Davide Saraceno (Jean Sorel). Like all the others in the films I mention, he seeks a job not only just to eat, but in this case to support a new baby, its mother, the frail blonde beauty he’s known since childhood, Ivana (Valeria Ciangottini) who he’s unexpectedly gotten pregnant. With any luck he hopes to be able to save up enough to get his son baptized and marry his girl who’s taken refuge in the slum-like apartment where his mother and sister eke out a daily life desperately trying to feed, dress, clean their offspring. For them, Davide is a scofflaw, a no-good who disappears for days at a time, arriving home without any explanation of where he’s been each night.

They’re not exactly wrong in their assessment given the demands they daily face, but in this particular case the boy does not spend the day hanging out with his male friends, bragging, and hoping for a bit of luck to squeak through the cracks, but actually does seek out employment. Indeed, the first half of this film satirizes the issue by taking our young ready-to-work hero through an endless bureaucracy of promises, sending him on a wild goose chase from his seedy uncle (who’s obviously into some illegal dealings regarding food products) to the offices of Moglie (Paolo Stoppa) who writes out a reference to another friend, which sends him by mistake to the man’s brother, and then to the man himself who, in turn, writes him out a reference that, when Davide stops to read the envelope, bears the name of Moglie again. 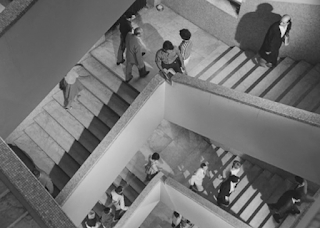 The various complexes of various offices and buildings—one of which bears some resemblance to a series of endless staircases that lead seemingly nowhere as in the drawings of M. C. Escher or a scene out of the writings of Franz Kafka—that send him, quite literally, like a rat through maze filled with cold, hostile, and frozen faces. In between disappointments he seeks out s ex with a beautiful neighbor, Marina (Jeanne Valérie), who he keeps reencountering, first on the way to his uncle’s, later on his return to Moglie’s office where he has overheard the man on the phone ordering a manicurist to his office, the job and person of for which the older man has requested matching up with Marina, who finally encounters again on her way to complete the task.

He’s had sex with her some time ago, and for the second time in the day he pleads with her to provide him with some diversion, which before her visit to the older man for the same reason, she’s eventually willing to engage on the office-building rooftop. 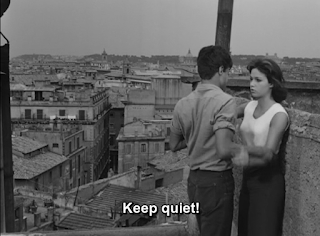 She pays him, strangely enough—which, as we shall see is the pattern in this film—by showing up when he has returned to Moglie, undressing in preparation for their encounter with the businessman while she suggests it should be no difficulty for him to find a job for her friend; in s hort, knowing from Davide that the man’s wife is out of town on vacation, she subtly blackmails Moglie so that he might simply get rid of the pesky boy and get down to his business with her.

The job Moglie finds for him—what might be described as the second act of our tale (in the original it began after an intermission)—is as an assistant driver, a kind of male companion, to a slightly older and more experienced version of him, Carpiti (Rik Battaglia) who drives a truck filled with animal fat for a wealthy man who operates an olive oil plant, who obviously is mixing his specially-grown oils with an illegal supplement.

Along the way, Carpiti picks up a prostitute who he knows from previous trips. During a break in their travels, the prostitute suggests that Davide become her pimp, an offer which, the understandably confused twenty-year-old rejects, while Carpiti fucks her and steals her purse, leaving her behind as they drive away. 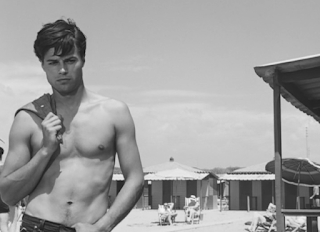 Reaching the oil baron’s seaside mansion—presumably so that he can be paid before delivering the oil to the factory—Carpiti is taken away to do business, while Davide is asked to wait with the the businessman’s female friends, one of them being the wife, as it turns out, of the cheating Moglie. The other, Freja, who I mention above, appears to be the oil baron’s girlfriend, a wealthier kind of prostitute, who immediately takes a liking to Davide, managing to get him into a pair of borrowed swim trunks and into the ocean by her side.

After she drives him up to the oil magnate’s mansion after their swim, Davide finds himself with Carpiti back on the road. But this time they suddenly find Freja speeding up behind them in her Ferrari, stopping them to tell them that someone has tipped off the police about the boss’s mix of oils, so it is no longer safe for Carpiti to travel on with the evidence. She takes over the driving, while keeping the surprised and now utterly clueless Davide at her side. To his simple way of thinking, it appears that she has simply kidnapped the truck and him to finish what they couldn’t back on the beach.

And indeed, in her breezy manner with him, querying him about his sexual conquests and teasing him for his worries about finances and his daily tribulations, and finally uncovering the truth about his “wife” and child back at home, she stops near a woods where, in fact, they do have sex. 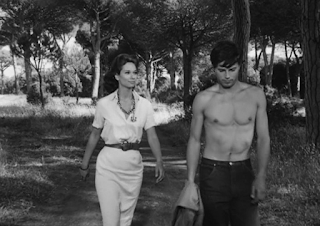 Soon after, however, the truck suddenly roles down an embankment bursting into flames, the boy blaming her for not properly putting on the handbrakes. She simply dresses, suggesting that he do so as well, and proceeds on foot back to the house with him in tow. Startled by how blasé she appears to be about the loss of millions of lira, he explains that he has taken on this job just to help save up 50,000 lira in order to buy a food concession at a local market which, if it works out, will provide him, Ivana, and his son enough weekly money for the rest of their lives—unable to imagine that her obliteration of the truck has been, in fact, intentional, a sure way of hiding the evidence.

She describes him as a bourgeois sentimentalist, which in fact he is. Except, he counters, for Ivana he is more than just a pair of pants, a shirt, and a tuft. When they reach the mansion once again, she pulls out 50,000 in cash, puts it into an envelope and hands it over to Carpiti to give to the boy, another payment for his sexual services we might argue.

When later Carpiti simply hands him some bills, we can presume that the driver has taken his share of that payment as well, and Davide shows some apparent disappointment in the amount.

He takes the bus back to Rome and then remembers the dead man he has seen across from Moglie’s office. The man, who evidently no one cared enough to even visit during in his wake, was wearing an expensive-looking ring. Encountering the corpse for the third time in one day, Davide carefully pulls the ring from his finger and puts into his pocket.

After his long, crazy day, he finally returns to his mother’s apartment with the money, tossing it to his ever-complaining mamma while insisting she use it as payment for his food stand and perhaps for his boy’s baptism. For the first time in the work, she is speechless, while, similarly for a first time, Ivana speaks, asking him where he has got the money. He answers, “I didn’t hurt a soul,” and goes to the baby, picking him up and playing with him, trying to make the child laugh by asking over and over, whether, when he grows up, he will dance with his dad. 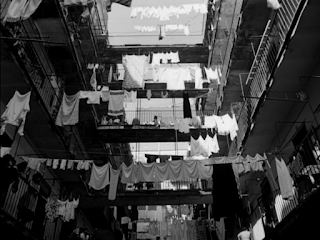 Bolognini’s richly black-and-white-textured film conveys the depth and warmth that exists in this Roman slum of open balconies connected with a cross work of clotheslines, while featuring the rest of the film’s various venues, in the harsh light of the Italian sun, as uninhabitable spaces that offer none of the honesty and modesty of this world of the poor. In the absurd disorder of the world the fiction presents, a handsome boy like Davide can only seem to get ahead with the help woman who pay him for the lean body maintained by starvation and the endless runs through the streets that his fellow male elders demand. He is as surely an innocent male prostitute as was Fellini’s open-hearted, simple-minded female believer in love, Cabiria, in his 1957 film Le notti di Cabiria.