In one of the very first of the film genre of  the “amateur back yard musicals” that Mickey Rooney and Judy Garland later made so very famous, Roscoe “Fatty” Arbuckle’s 1919 26-minute movie is a true gem.

It begins in an amateur theater with the rude mechanicals of the backstage management left to the unsteady stagehands of Arbuckle, Buster Keaton, and Al St. John.

Arbuckle is busy posting a new announcement for the theater’s next fare, but fortunately, troubled by a pest of a young boy—who at one point, in an example of appropriate early 20th century child abuse, he plasters to the poster itself—gets it all wrong, leaving the sign, with the barn door open, to read, instead of

YOU MUST NOT MISS

FAMOUS STAR WHO WILL

to announce: MISS SKINNY WILL UNDRESS HERE AT 2PM. Predictably the show draws a large crowd.

In the meantime the two “stars” arrive, both demanding their ego-driven celebrity attention, which Keaton provides through a shifting star sign that travels from door to door. 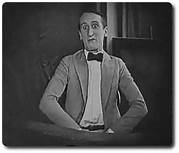 The first of these frauds, in one of the earliest of cinematic pansy routines, is the “eccentric” dancer (John Henry Coogan, Jr.), a tall acrobatic leg lifter in the manner of the later long-legged comic dance performer Charlotte Greenwood (you may remember her as Aunt Eller in the film version of Oklahoma!). But this character is also about as fey as you can get, with the aloof hauteur, the limp hand gestures, and self-contentment of every snippety sissy who ever set foot on stage. His dancing is a sight to behold, but even better are the comic imitations of his terpsichorean traipses by Keaton who plays out an early version of a hurricane-blown man and a lovely series of twirls and twists by the always  surprisingly light-on-his-feet Arbuckle. 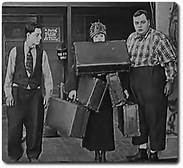 The brute of a strong man (Charles A. Post) enters with five heavy suitcases lugged about by his frail assistant played by Molly Malone, presumably the “Miss McSkinny” of their poster. She not only is forced to carry his load, but soon after is tasked with emptying out a trunk of his barbells and weights, which she drags out one by one as he lazily looks on. In a wonderful scene of sympathy for the much-abused woman, Arbuckle, Keaton, and St. John hook up his barbell to electrical currents and temporarily knock him out as punishment for his treatment of the poor girl, with whom Arbuckle almost immediately falls in love.

As the show is about to go on the two leads suddenly go on strike and the show seems doomed until Molly whispers the inevitable words into Arbuckle’s and Keaton’s ears: “Hey kids, I’ve got an idea, let’s.....,” and put on a show they do.

The first two acts go fairly well with Molly doing an exotic dance, and, in the second act, Keaton as a princess “king” (part of an explicable plot that goes along with “The Fall of the Reign”), this time Keaton performing in drag instead of Arbuckle. As usual, Keaton isn’t very convincing as a girl, but he’s quite astonishing as a dancer who, as the intertitle reads, “thinks he’s an acrobat.” The great comedian was indeed an amazing athlete, and there is no better evidence of it in these scenes when in full “dress” he performs a no-handed cartwheel. 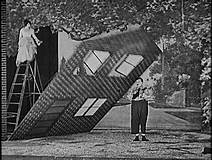 The third act results in chaos as the entire front of the set’s house falls to the floor, Keaton stepping out of an open window unscathed as he later does in his film Steamboat Bill, Jr. Fortunately, the audience believes the series of set disasters are part of the show and are delighted. But when finally the Strongman, who sneaks into the theater to watch show, becomes violent when he witnesses Arbuckle kissing Molly and shoots her, the entire audience is suddenly put into danger. Discovering a backstage swing, Keaton sweeps up into the balcony to bring down the bully who is finally subdued when St. John drops the entire truck of his weights upon his thick head. Applause.

Arbuckle ends this charming piece of silly heroics with a visit to Molly where she is nicely recovering in the hospital, offering her an apple from which he promptly takes a large bite, suggesting perhaps that he is the willing Adam to her Eve.

Posted by greenintegerblog at 5:05 AM