the proper way to marry a girl

Roscoe “Fatty” Arbuckle’s 1917 film The Butcher Boy is of special importance for a couple of reasons, the first of which is that it represents one of Buster Keaton’s first roles, and apparently, while working on this film so intrigued him that it resulted in him becoming so endeared with the camera that he began making films. Arbuckle would be his mentor and his supporter for most of his short-lived career silent-motion-picture career.

Keaton’s role in this film, however, is minor and of no major importance. Indeed, the first half of this film consists of rather standard comic routines that might be used in a narrative located in a grocery. As the title suggests, Arbuckle works as the butcher boy, which gives him the opportunity to show off some of juggling talents, and his ability to work with knives. When a woman calls for ground pepper, the store dog Luke is asked to run upon the belt connecting to the pepper grinder. And there is a supposedly funny scene wherein Arbuckle dons a fur coat to retrieve some pepperoni kept in cold storage. 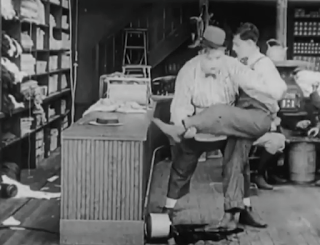 In another longer scene Keaton comes into the store to buy some blackstrap molasses and through a series of mishaps ends stuck in the molasses from which Arbuckle must extricate him, booting him eventually out into the street.

What also becomes quickly apparent is that Arbuckle and the shop owner, Mr. Grouch’s daughter Almondine (Alice Lake, named Amanda in later intertitles) is in lover with Arbuckle, to two secretly sending each other kisses to hide their relationship not only from her father (Arthur Earle), but from the other incompetent shop keeper, Alum (Al St. John, named Slim Snavely in later intertitles) who is in competition with Arbuckle for Almondine’s love.

Because of feisty customers and the battle between the two shop clerks predictably ends in chaos with small bags of flour being hurled into the air, pies being tossed into faces, and brooms whipping up the flour into clouds which descend upon the workers and customers alike, ending in disaster for both Alum and Arbuckle.

The very next day Grouch sends his daughter off to a boarding school where she is not allowed to receive letters from any but her direct family and is permitted no visitors.

Yet it is precisely these restrictions which allow The Butcher Boy to become such an endearing movie and proffers Arbuckle the opportunity to make this film a memorable one.

As I have mentioned previously, Arbuckle was a master of drag impersonation, and dressed up as Almondine’s favorite cousin he becomes a quite pretty, free-spirited young female, who seeks to attend the same school in which Almondine is imprisoned. 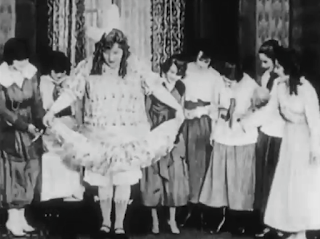 Indeed the school’s principal first encounters her young pupil and the new girl kissing on the front stairs of the entrance, whereupon she immediately upbraids Almondine for talking to strangers, appearing to ignore the fact that the act in which they were engaging might be interpreted as a lesbian kiss.

Introduced as her cousin, Arbuckle is quite quickly made to feel at home in the new school, portraying a proper girl in her/his entire demeanor, particularly in comparison with another new schoolgirl, Alum, who has also dressed up as a female student, who noisily slurps his soup and chomps down his food so quickly that he needs to store it in his cheeks as he chews. The cousin sips her soup so nicely, daintily cuts ups her meat (just as the butcher boy had) that we can almost forgive her for rubbing the butter on her hands before applying it to her bread. 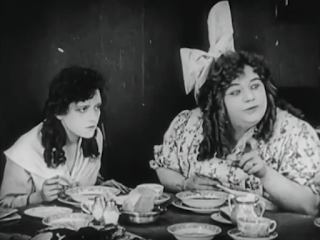 Nonetheless, the two new “girls” get into a bedroom fight, kit is Arbuckle who is spanked by the principal rather than the true hellion, Alum. But even then the actor remains in character, behaving just like we might expect from a naughty overweight girl with a mix of embarrassment and peevish resentment.

Alum, however, joined by two accomplices, Keaton and Joe Bordeau has far cruder ideas: they intend to kidnap Almodine, Alum ridding himself of his unconvincing woman’s attire, attempting to tie down and “rape” (in the original meaning of that word) the girl.

They have not, however, counted on the keen hearing of the principal and the fact that Luke the dog has followed his beloved friend Arbuckle to the school, threatening the three boys whenever they enter a hall wherein he waits. The principal, meanwhile, having called the police, takes out her revolver, and shoots at the boys as, one by one, they stumble from room to room searching the missing Almodine, one another, and simply a way out. 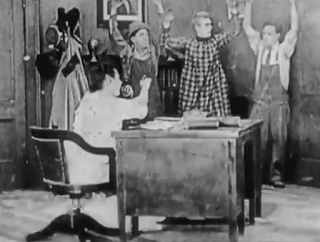 Returning from her punishment for bad behavior, Arbuckle finally hooks up with Almodine and the two  simply run away together, “Fatty” removing his wig but retaining his quite pretty dress as, coming across the parson’s house, they move toward the house to be married, apparently with Arbuckle still half in drag—an incident that calls up the ending of the earlier silent film from 1911, Alice Guy Blaché’s Cupid and the Comet. 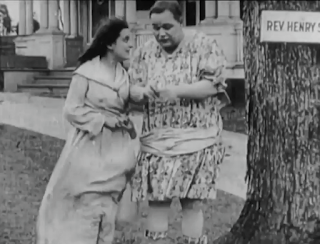 Alongside Miss Fatty’s Seaside Lovers (1915) and his Good Night, Nurse! (also with Keaton) of a year later, Arbuckle makes it clear that he was one of the most successful of cross-dressers of silent-film comedians, amazingly turning his girth into almost dainty balletic performances when it came to portraying the opposite sex.

Posted by greenintegerblog at 11:42 AM