showing up to the wrong revolution

Andrew McKenzie (Hal Frederick), wearing a bowler hat and an umbrella, after graduating from Oxford is a novice solicitor and champion cricket player who most definitely has a proper British accent, but is having difficulty finding a room to let. On the phone with one would-be landlord, he is asked if he might be Scottish, to which he replies that he’s from Jamaica. Does that mean he’s black? comes the predictable next question. “Hopelessly,” he replies, which obviously reasserts the dark color of his skin but also may suggest his own personal attitudes toward his skin color. Obviously, he will not get the apartment. 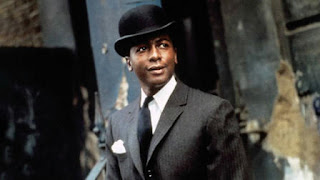 When he finally shows up to the flat of a more friendly gentleman looking to share his flat in Knightsbridge, Roddy Pater (Robin Phillips), he finds his potential flat-mate has also graduated from Oxford, although from another school, by way of a not very good public school which, he jokes, offers “Homosexuality at reduced prices.” Yet when Andrew asks if he himself is queer, Roddy appears to be startled as he snaps back in the negative, Andrew openly stating the obvious, “It’s best to be clear from the outset.”

Yet neither of these men are very clear when it comes to identifying their true selves. Andrew quite apparently wants to be fully accepted by the British establishment into which he has been educated, yet keeps insisting that he is fed up with playing the white man’s game and is determined to return to Jamaica.

Roddy, born into the British gentry with a decaying manor house with parents hiding out in its kitchen from the tourists who tromp through the historical testament to their financial losses, is equally unhappy with his job as an advertising executive and is desperate for the opportunity to fraternalize with and even become, if possible, one of the working class and a participant in the black world temptations of the sensual and sexual.

These two, “gentleman sharing” as the film’s title announces, are in some respects the perfect pair, a kind of Yin and Yang or mirror image of one another, the one seeking a way into traditional British society while the other seeks a way out. Yet oddly enough, although they are almost standard-bearers of their “types” of human being, neither of them quite perceives that fact.

Although Andrew seems, on occasion, to mock his own behavior, he nonetheless remains throughout dreadfully conditioned to define what is meant by a “white bigot in black skin”; while, Roddy, as Vincent Canby writing in The New York Times observes “looks like a cherry-lipped Beardsley, [who] is so fey it's quite impossible to believe that he is unaware of his repressed homosexuality.” Both have girlfriends who represent, in part, the aspect of themselves they would like to abandon. Obviously, its easier for the sexually frustrated Roddy to ditch his fox-hunting, almost frigid gal; at least Andrews’ Caroline (Esther Anderson) is beauty who provides him with intelligent repartee and good sex.

The problem is that not only are these two major figures unable to figure out who they truly are and how they want to proceed, but by movie’s writer Evan Jones, working from a novel by David Stuart Leslie and Canadian-born director Ted Kotcheff seem unable to know what they what to say about these two or how to express it.

Some of this territory was far more intelligently and deftly explored in Colin MacInnes’ three fictions City of Spades (1957), Absolute Beginners (1959) and Mr. Love & Justice (1960). Certainly McInnes dealt head-on with the issues of British racism and its establishment in a way that this film seems only to be able to flirt with. While Kotcheff’s film firmly pokes at the edges of the problems with highly sarcastic (if cringeworthy) bigoted lines such “Negroes are like air crashes. I mean you read about them but you don’t expect them to happen to you,” and even goes as far as to have Roddy’s landlady throw out Andrew because of the noises he and his lover make during sex, describing the two as “Niggers,” Two Gentlemen Sharing finds it nearly impossible to actually explore the various differences and self-degrading behavior within the black community itself or, more importantly, to actually have its black figures confront the white racism around them as do McInnes’ West Indies characters.

It is far easier to snigger over the absurdity of Roddy’s parents and would-be girlfriend or through him to demonstrate the inadequacies of white desire to lay down their prejudices and join up with their “otherness” which they approach as if traveling to an exotic land where they may discover someone dangerous but possibly friendly natives. Even a white girl like Jane Archer (Judy Geeson) is difficult for Roddy to truly love or even have sex with since she has an adopted black father.

In the end, Kotcheff’s film seems, in fact, to lay all the inherent difficulties of these two worlds laying out the problems primarily in Roddy’s court, since he not only refuses to fully call out his landlady’s behavior, resists introducing his flat mate Andrew to his father, and, at film’s end, but finally orders all his partying black friends out of his apartment with the help of the cops and a neighbors complaint.

Nearly all the critics, accordingly, although finding something basically likeable about the premise of the film, determined the work itself to be “confused” and unable to define a coherent purpose through its various cultural and sexual implications. Roger Ebert summarizes the general critical response:

“Two Gentlemen Sharing is one of those movies that absorbs us from moment to moment but never resolves itself into any sort of coherent statement. Not that a movie should necessarily make a statement; but this one appears to, and yet leaves its audience confused.”

What appears to be at the heart of the problem is that the story has set up to situation where two men, sharing a perfectly nice flat, have unintentionally fallen in love—love in a way we might describe as a deep brotherhood rather than a sexual attraction (although in Roddy’s case it may even be the latter)—with which director and author felt uncomfortable truly engaging. Even the British censors thought the film represented dangerous territory, so restricting its showings for fear that it might excite a race riot (events which MacInnes’ work actually engaged) that the British Film Institute proclaims that it never saw the light of day in the UK, despite the fact that in ran in a few theaters for several weeks.

What creators and censors both didn’t seem openly to be able to say is that both the central figures are inherently, given British culture, queer, outsiders who are frightfully determined despite all evidence to the contrary to remain closeted. 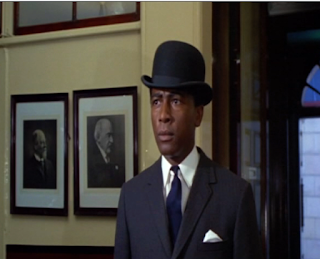 Each has his moment of coming honestly to terms with their queerness. Andrew, prodded by his friends to apply for a position of a British law firm, arrives only to recognize from the walls filled with portraits of all white elderly forebearers of the firm’s reputation, and knowing the current ones are clearly far less intellectual capable than him, that his whole attempt to become one of them is absolutely pointless, and leaves the building before even meeting for the interview, handing over his superficial badges of respectability, his hat and umbrella, to a flabbergasted passerby.

For Roddy, it takes a great deal of alcohol and the endless sexual flirtations of a flamboyant black queer named Marcus (Ram John Holder), who observing Roddy’s condition, determines its time to sexually pounce. The surprise his advances and Roddy’s momentary reciprocation of them sends him into such a spin that he can only slug his abuser while simultaneously trying to deny and rectify his sudden violence. Yet the shock of the truth, tears running down his face, forces him to also realize that what he thought represented the goals of his rebellion, the embracement of a culture utterly different from his own, was not truly what he was seeking after all—forcing him to painfully and hurtfully send his “friends” away. It is not, after all, Andrew he loves and admires but an otherness that can only described as sex with men. Foolishly, he’s signed up for the wrong revolution, the gay one still further off in the distance. And, in a sense, he too now can be seen as a kind of racist, as someone who doesn’t truly care about blacks, but simply was confused by the fact that for him they symbolized a difference he was vaguely trying out. 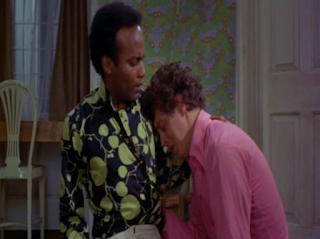 In other words, even seemingly sympathetic whites, like Roddy, can’t truly be trusted when they discover their own needs differ. Marcus, who also stands apart from his black community, may have been his only possible link.

In fact, these two gentleman seemingly “sharing” were actually sharing nothing except for a way out of who they truly were at heart. If the film’s abrupt ending seems to call for a resolution, or at least a clearer expression of just what the issues were and are, think about the consequences. How might an elderly heterosexual professor attempt to explain what it’s like being black to an all-white gay audience or lecture, in turn, on gay politics to a room of pained and frustrated blacks? And we’re not even talking about the subtle issues that concern the dismissal and outright abuse of women expressed throughout this work. To spell out the absolute distinctions between these various but vitally important issues is demean those suffering for the inability of comprehension by the others. The movie is confused because so are the issues which cannot be summarized in a fiction of a couple of hours in length.

By the film’s end, all we can say is that both the central figures have been forced to come to terms with themselves, and now have no choice but to walk away from the false solutions they sought out in the other. Andrew has still a large community with whom to communicate. And Roddy might at least begin with the gay boys who have been keeping an eye of his comings and goings across the street.