Tom E. Brown’s 1997 short of 7.08 minutes is a comedic film about a very serious subject AIDS. Appropriating the style and techniques of Edward D. Wood, Jr.’s Plan 9 from Outer Space and Glen or Glenda, Brown’s film features host Sonny Goff who giggles with dark glee over the call which every gay man fears receiving: the news that he is HIV positive. 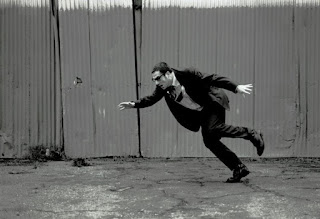 Suddenly, no one will any longer touch him, and he feels “weird” in a way that he cannot even describe, despairing and depressed. Until suddenly he realizes that nearly everyone he encounters is weird, from the boys down at steel mills, the friendly grocer, Officer Bob posting a road sign, or a young boy with a wooden mallet. The world is full of freaks.

Certainly, one appreciates those films on AIDS that also can recognize the importance of laughter that appears along with sorrow in films such as from Albert J. Bressan, Jr.’s Buddies (1985) to Nik Sheehan’s documentary No Sad Songs of he same year, particularly, as in this case, it is the director himself whom the film is featuring (the final credits, which include numerous individuals doing various activities that have nothing at all to do with film itself, including an enema boy and a bug handlers, ends with a reversal of the standard legal advisory: “The persons and events depicted in this motion picture are not fictitious. Any similarity to actual persons and events is completely intentional.”) Yet, in both its rather sophomoric use of sources and its meaningless conclusions I can only suggest this film is not as funny as it is inane, despite its apparent success in the gay film circuits.

And don’t tell me that something new might not be expressed about AIDS in the late 1990s when lives were being extended at the same time that life-saving drugs were being held from those who might need it most by their outrageous prices and unavailability—concerns which, in fact, Brown would explore in later films.