Adam Tyree | In Half

reasons for a death

There’s something basically unlikeable about Adam Tyree’s short, 14 minute film about twins, In Half. If not precisely unlikeable, at least it begins feeling like something is askew, that the central characters have not yet quite figured out on which side of the issues they stand.

It begins mid-way through a funeral, evidently being held of the UCLA campus in Los Angeles, although that simply may have been an available space for Tyree to film his work since it no way plays a role in the film itself.

We also recognize the brother of the dead man, James (Jake Brown), who we quickly perceive was a twin to the man who apparently has committed suicide. And we are just suddenly introduced to the man who was the dead twin’s former lover, Travis (Adam Bucci), who has evidently attended the ceremony uninvited. The other figures are never identified with regard to their specific relationships to the dead boy, but we presume one of them is his mother and others are family friends and other relatives.

When Travis attempts to introduce himself to James, he is quickly dismissed with a snarl, “I know who you are.” And others in the background also show their hostility to Travis. One, in particular, a black man named Sam (Kim Estes) seems to blame the brother’s death precisely on having had a relationship with Travis, as well as being gay, attended with what he presumes means drugs, diseases, and a destructive lifestyle.

Travis, having overheard Sam’s homophobic comments, immediately speaks out for James, but whatever sympathy he might arouse in that defense is almost immediately muted when he rather violently accosts Sam, James being forced to pull Travis away from the confrontation by taking him outside the chapel, reprimanding him for behaving that way at the solemn occasion.

Whatever judgment we might have suspended about Travis’ behavior is quickly dismissed, moreover, when all he can do in response is to offer James a joint, make light of the situation, and, skateboarding around the troubled brother of the dead man, accuse him of being the opposite of all the good qualities the brother represented while in the very next moment asking if he can “crash” at James’ place for the night since his current lover—yes, we discover, he had broken up with the brother over some vague notion that it was “time to move on”—lives in Pasadena.

Far too old to be such an adolescent, wise-cracking, “smart-alek,” Travis is someone we quickly grow to distrust. And we are even more amazed when the apparently rather straight-laced James agrees to the share his apartment with him for the evening, where a few frames later the movie takes us.

There, he further makes himself uncomfortably at home, prodding James even further in an attempt, evidently, to break through his shell of apparent heterosexual normative behavior. In the process he does, however, manage to convey just how full of life James’ brother was and how much he loved James. Indeed, he finally reveals that he knows just “how close” the twins actually were, insinuations that result it a near violent reaction from James—which ends in a crying jag on Travis’ shoulder, the two embracing and kissing, and ending up together in bed. 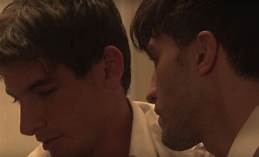 Obviously, the twins did have a very close relationship involving sex, and we can now well understand James’ fascination with Travis in his attempt to get closer again to his brother to find, after they had broken off their relationship, how he felt and how he loved.

Yet, Tyree’s film offers no rational solutions to James’ deep loss. The next morning, after Travis leaves, he goes to Sam’s house, knocks on his door, and makes sure Sam watches him from his bedroom window, as he puts a bat through Sam’s car windows and runs off. If we might applaud James’ return to the righteous fold of LGBTQ life, we certainly cannot admire his way of attempting to solve homophobia or come to terms with his own deep loss.

I can’t say as I admire this short work about gay twin love that refuse to not only explore the roots of homophobia, its possible solutions, or the reason for James’ brothers early death, leaving us only with the characters who, in their own failed behavior in life, may represent some of the reasons for the latter.

Posted by greenintegerblog at 5:56 AM