Marjorie Gaffney (screenplay, based on the film by Reinhold Schünzel), Victor Saville (director) First a Girl / 1935

If Reinhold Schünzel’s Viktor und Viktoria (Victor and Victoria) was in 1933 a rather spritely film of gender disorientation which, despite its basically innocent plot was banned under Nazi rule, by 1935 when Victor Saville decided to adapt the film for British audiences as First a Girl, it had grown into a trivial, anti-LGBTQ Busby Berkeley-like musical extravaganza. Here was the kind of musical film to which you could take your granny in order to make her feel absolutely naughty and up-to-date without her hardly producing so much as a blush.

Saville’s film is absolutely no LGBTQ lark; but then, for that matter, nor was Blake Edwards’ 1982 adaptation which somehow inexplicably had a large following among gays during its Broadway production in 1995 which ran for 734 performances. At least in Blake’s work the man who dreams up Victoria’s existence, Todd, is a gay man.

In both Schünzel’s and Saville’s version he a heterosexual who clears the route for his drag friend Victoria/Billy/Elizbeth (Jessie Matthews) to fall in love with Robert (Griffith Jones) by himself courting Princess Mironoff (Anna Lee). 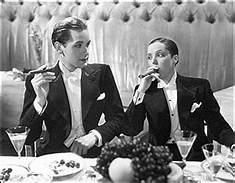 The major amusement of the version of the work centers around just how difficult it is for someone of one gender to imitate, let along try to “become” the “other.” No easy transitions at all in Saville’s world. Most of the humor derives from Victoria’s / Billy’s inability to do the manly things that might be expected of a drag queen out of costume: you know, smoke an outrageously long and strong cigar, drink down four double whiskeys in quick succession, and change from a woman pretending to be a man into female attire in a dressing room containing a strong man donning a wig, mustache, and other “manly” accoutrements, and a foolish comedian whose partners consist of geese. Sorry, but even Cary Grant might have difficulty living up to these “proofs.” I’m speaking metaphorically, of course. 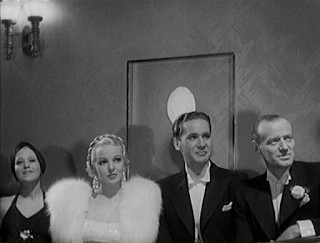 What’s even worse is that, unlike the German version in which Anton Walbrook as Robert at least first seemed quite intrigued by Victoria as a male, Jones’ Robert, although first finding her—before he discovers the performer’s “true” identity—to be “adorable,” quickly takes on the smug British disdain of all things sexually “excessive,” reporting “I dislike men who make marvelous girls.”

And he spends an inordinate amount of the film trying to prove that Victoria the noted drag queen is really a woman so that he might explain away his first momentary attraction to her, when what the audience really would like to know is how possibly he might have ever been attracted to the arch “bitch” of a character, Princess Mironoff, who in part, is responsible for poor Elizabeth’s losing her job as a dress-box carrier in the first place.

There are few nicely comic moments as when Victor (Sonnie Hale) first proposes the idea to Elizabeth of becoming a male drag queen:

But you'll have time off. And you can knit and knit to your heart's content...

But think what you're asking me!

[gazes upward as he quotes] "There's a tide in the affairs of men"—[descending temporarily to earth]—and women—"if taken at the flood, leads on to fortune..."

This'll be a spring one! [Takes her by the shoulders] We'll carry everything before us. I'll never leave you—and I'll never let you down.

Imagine what it is for those who have no choice being a man when they cannot resist being a woman, which is, in the end, what “Toddy” feels in the US Victor/Victoria stage musical. But I should imagine that knitting and knitting was certainly not what he had in mind. 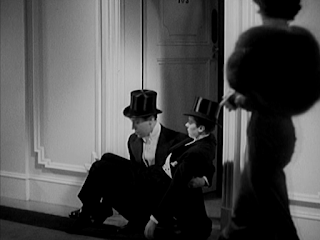 And there is a wonderful comic moment with the drunk Victor, carrying an even drunken Victoria/Elizabeth/Billy into “his” room, has difficult in directing the body through the door. Putting the tuxedo-suited “man” for the floor for a moment before, with great effort, he bends down to crunch up the body into his arms, when he is suddenly observed by a stately female hotel patron who surely must wonder what bodily activity these two late night males are performing.

But most of the film is simply devoted to allowing the toothsome but rather talented Jessie Matthews sing out musical hall songs in high register allowing to prove how marvelous it all is by her pretending to be a man singing a woman’s song. A sizeable chorus backs her up with mirrors all alternately dressed in Spanish mantillas and male attire. 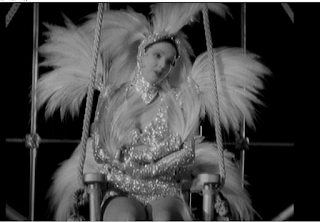 In the kitschy late film song, she sings in a bird cage while rocking high in the air on a wooden perch before being lowered to the bottom of the cage in order to sink into a feather-lined clam shell. At the end, Sonnie Hale gets to repeat the whole thing in drag, while falling and flailing about in a manner that is absolutely offensive to any real drag performer while assuring the heterosexual audience presumably that everything is in good fun.

Elizabeth drives off with Robert to some imaginay bungalow, while Victor settles in with the Princess bitch whose nastiness is redeemed by her love of such a Shakespeare quoting fool as he is. I am sure the director and script writers where perfectly happy for there not being so much as even a “panze” remaining in sight.

I can’t say that we might even think of this work now as being “gay friendly.”

Posted by greenintegerblog at 12:04 PM