William Keighley and Howard Bretherton | Ladies They Talk About

Brown Holmes, William McGrath, and Sidney Sutherland (screenplay based on the stage play  Gangstress, or Women in Prison by Dorothy Mackaye and Carlton Miles), Howard Bretherton and William Keighley (directors) Ladies They Talk About / 1933

As one of the most noted of the numerous “girls in prison” melodramas—the film was remade as Lady Gangster in 1942—you might imagine that Howard Bretherton’s and William Keighley’s Ladies They Talk About (1933) might be filled with just those kind of women of whom people like to gossip: lesbians. But in fact, the three writers basically have erased such figures, concentrating instead on the classy former socialite-gone gangster’s moll Nan Taylor (Barbara Stanwyck), arriving at prison with a huge hat box and a stylish gown; the mean cheerleader type, ‘Sister’ Susie (Dorothy Burgess), the kind of girl in high school who’d scheme and plot to take away another girl’s boyfriend and go home to complain to her wealthy daddy if she didn’t get her way; a dotty, formerly wealthy Long Island matron who served ground-up glass to her social rival; a former Madame of a brothel Aunt Maggie (Maude Eburne); a nice, tougher but wiser girl, Linda (Lillian Roth); and a strict but truly caring Prison Matron (Ruth Donnelly), all of whom who don’t so much act as perform true to their character types—which permits the film’s audience to applaud Linda and Aunt Maggie, while booing the pretend civility of ‘Sister’ Suzie. 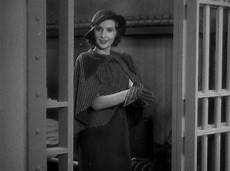 Stanwyck, always a watchable actress, has two contradictory parts to play as Nan in this movie, the tough and hardened gangster moll and the would-be sweet “if they’d only trust her” Deacon’s daughter who somehow lost her way. Nan works hard to keep up her tough front, arranging with her now imprisoned gangster friends for a way they can tunnel up from the men’s ward of San Quentin into her room, from they will all hope to escape.

But at the same time the religious broadcaster David Slade (Preston Foster), who’s trying to run for the job of District Attorney, inexplicably falls in love with his former hometown acquaintance, ready to forgive almost anything she does, in part to rectify his sending her to jail in the first place after she has confessed, given his unexpected faith in her, to having helped Lefty Simons (Harold Huber) and his gang rob a bank. Now he’s not only sorry but evidently so head-over-heels in love with her that he sends her endless letters which she never answers, arranges finally for a meeting, mails off an illicit letter from her to Lefty with a drawn impression of the prison front door lock, and allows her to shoot him in the shoulder just to get her down the church aisle and into their matrimonial bed. 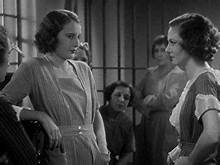 The only one who continues to stand in her way is sweet ‘Sister’ Susie who has fallen for the religious radio megastar—the Jim Baker, Michael Pitts, or Richard Rossi of his day—and is determined to make the man hers. The only major lesbian scandal of the movie is when she plants a “love letter” in Nan’s coat—presumably written to another woman in the prison compound—which gets her sent to work in the laundry with visitation rights cancelled for a month. Susie also witnesses, predictably through the keyhole, that Nan shoots Slade believing, mistakenly, that he has betrayed her to the authorities about her involvement with the failed prison escape (Nan: [immediately after shooting Slade] “I didn’t mean to do that.” Slade: [holding his hand to his shoulder]  “Why, that's all right, Nan. “It's nothing."). 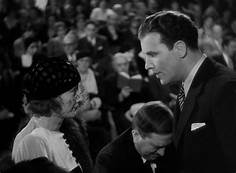 Susie’s squeal to the detective this time only hurries the couple off their honeymoon, although even the film’s audience by this time have dropped their jaws a bit in complete disbelief. 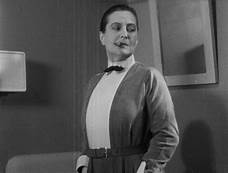 The original play on which this film was based was written by Dorothy Mackaye and Carlton Miles, Broadway actress Mackaye having had her husband beaten to death by her lover when her husband suggested she stop seeing him. And the character of Nan is clearly based on the writer herself, who, as the Pittsburgh Press described it, “showed up at prison with silk stockings and a modish dress,” spending ten months in San Quentin State Prison for her crime. So you’d think she might have been able to come up with some far juicer lesbian scenes. Maybe there are some in her play, but nothing much shows up in this movie. Other than the planted letter all screenwriters Brown Holmes, William McGrath, and Sidney Sutherland are able to provide is the female equivalent of the male pansy, a bull dyke whose cigar butt Nan finds on a prison cell floor, Suzie nodding her head to a woman who throughout the film does not nothing but exercise, Linda cautioning her new friend: “Be careful about her. She likes to wrestle.”