Geoff Burton and Kevin Dowling | The Sum of Us

David Stevens (screenplay, based on his play), Geoff Burton and Kevin Dowling (directors) The Sum of Us / 1994

Australian directors Geoff Burton and Kevin Dowling’s 1994 feature film, The Sum of Us, represents a new wave of LGBTQ films that occurred in the early 1990s, mostly from Canada, Britain, Australia, and continental Europe—although in the year just prior a major studio had released, finally, the first widely distributed film on AIDS—almost a decade after the far superior works by Arthur J. Bressan, Jr., John Erman, and Bill Sherwood—Jonathan Demme’s Philadelphia, and a larger independent studio, Strand Releasing, had introduced US audiences to the new gay wave director Gregroy Araki.

If several of these new gay and lesbian works also represented fresh and exploratory cinematic procedures—Araki’s films The Living End (1992) and Totally Fucked Up (1993), Todd Haynes’ Poison (1991), Derek Jarman’s Edward II (1991), Julien Isaac’s Young Soul Rebels (1991), Atom Egoyan’s The Adjustor (1991), and Tom Kalin’s Swoon (1992)—The Sum of Us, like Philadelphia was very much of the old school. Based on the 1990 play by David Stevens, Burton’s work was basically a restaging of the play, opening scenes to the out-of-doors and moving the action between rooms and spaces in a manner that a stage drama could not, but primarily retaining the conceits of theater,  including the theatrically interesting (although not completely original) “breaking of the fourth wall,” permitting the characters to speak directly to the audience, but which on film had been used for more than a half-century or even earlier if you include the audience gestures of several silent films such as Roscoe Arbuckle’s Coney Island. What might have appeared as somewhat post-modern techniques in the basically naturalistic play on stage, simply reiterated the theatricality of the film.

Yet it is precisely the conventionality, the domesticity, and utter normalcy of The Sum of Us, that is crucial to this work. Steven’s gay story was not at all about gay rebels, perverted murderers, or Genet-like obsessives, but an everyday working Aussie plumber, Jeff Mitchell (Russell Crowe) living with his absolutely “normal” heterosexual father Harry (Jack Thompson) both struggling and stumbling about in their attempts to find love in their lives.

What is utterly different in this film is that the plumber is gay, the fact of which the father is completely comfortable about, even encouraging his reticent son to go in search of the wonder of love that he had found his wife. 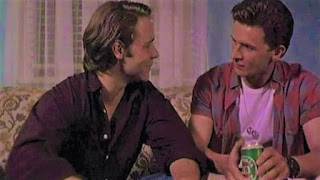 At the time of this film’s release what might have surprised and even shocked some of its viewers is just how accepting Harry is about his son’s sexuality and how surprisingly chummy he is with the handsome boy, Greg (John Poson) whom Jeffrey brings home. Indeed Greg is himself somewhat taken aback by a father who, unlike his own (Bob Baines), does not go into a homophobic rant or, as he later does when he observes his son on the local TV broadcast of a Gay Parade celebration, a mad denunciation and denial of his offspring. The fact that the two of them piss together on Harry’s prize tomatoes, share open conversations about safe sex, peek at the images of a gay magazine Harry has brought home for his son’s wanking pleasures almost “freaks out” Greg on his first visit to Jeffrey, quickly short-ending what might have been enjoyable sexual romp in bed. Greg admits that he finds the whole situation just too “domestic,” and hints that he, like so many gay men have learned to behave in a society that objects to their existence, enjoys the secretive and illicitness of gay sex more than a totally honest and open encounter with another man. For the same reason, perhaps, he finds Jeff’s Aussie shower room phrases—Jeff plays footy with the local straight boys—something that “turns him on.”

Unlike the displaced plumber, Greg is a public gardener whose dream, as Harry pries out of him in their “chat,” is to someday, single-handedly, plant a forest—just the sort of wonderous dream that Harry the sentimentalist most admires. 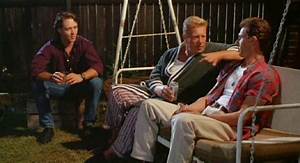 His own son, when he appears to be rejected by Greg, has no energy for imagination, and sits out his funk by drinking and smoking joints.

And meanwhile Harry is himself busy with a new woman, Joyce Johnson (Deborah Kennedy) who he’s hooked up through a dating service. Indeed both widowers very much enjoy one another’s company and are looking forward to perhaps making it permanent. For Harry it all depends, given his deep love and devotion to his boy, on how she gets on with Jeff. And it would seem, since Jeff—despite his tendency to take any temporary hesitancy of a potential sexual partner as a statement against about his entire existence—is otherwise a kind soul and a handsome “bloke,” as father describes him.

Unnecessarily, Stevens has also adds another layer of incredulity to his plot by making Harry’s mother and Jeff’s beloved grandmother (Mitch Mathews) a woman who late in her life established a lesbian relationship with a friend Mary (Julie Herbert) which surely helped to make Harry such an open-minded person when it comes to LGBTQ sex, and provided Jeff with a sense of sexual alternatives as he was growing up to realize his “differences.”

Although it is a clever device to embrace a larger part of the gay community within his play, in the film at least it appears to diminish the notion that a very ordinary father who loves his son can so quickly embrace his lifestyle. Harry, evidently, had a few extraordinary opportunities to help him with regard to what to most straight parents of the day might have seemed a Herculean leap of faith. And if Jeff seems to be unphased by being a gay man when, as we soon discover, parents such at Greg’s made life for a young gay man hell, we now have an explanation, something I suggest the work might be better without. This father/son team after all, are not so ordinary as they first have appeared. 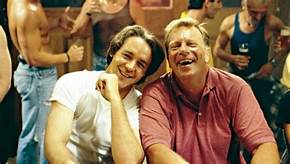 Harry, without even words to describe such irrational behavior reacts, too predictably I argue, by having a stroke, turning him into a wheelchair-bound paraplegic, unable to even talk, a burden for a son still on the prowl for love. 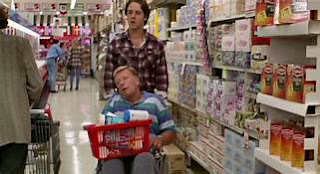 Actually it appears to give Jeff a new purpose in life, as he rolls his father down the grocery aisles and through the local parks communicating with the now frustrated father, who feels unfortunately blessed with the ability to still hear and comprehend what people say, responding to his son with a series of bell rings, once for “yes,” two for “no” and numerous rings when he gets excited or confused. That frustration arises mostly from the fact that in caring for him, Jeff is no longer seeking what is afraid he will eventually no longer be able to experience, the joy of loving and caring for someone who isn’t a member of the clan.

On both of the outings we observe, Jeff once again encounters the gentle gardener Greg who we know would be the perfect mate to him if he’d only allow things to go where Greg might now like to take them. Obviously, having lost his family entirely, Greg has now perceived the necessity for the domesticity he once disdained.

When Jeff encounters Greg in his own territory, so to speak, planting flowers in the public park, he finally gets up the nerve to leave his father alone for few moments in his chair and chat with his would-be lover. The two are so nervous meeting up again that we’re fearful that they’ll simply stutter themselves into another separation, but they do finally manage to make a date for the very next night, Greg promising to bring his toothbrush.

Harry meets Jeff’s news with such relief and excitement, that like his son, he is almost unable to express his feelings as he rings out too many electronic bells and, his eyes welling up with tears, he begins to weep with joy. Jeff doesn’t know what to make of his father’s reaction to the possibility that their private domesticity might be shared with another. Wiping away his father’s tears, he calms him, asking him to return to the simpler pattern of one for “yes,” two for “no.” The ayes have it, and both push off into a purple sunset with their hearts once more aflutter for the possibilities of love.

It’s a sentimental film, but its message is so very straight-forward and loving for a community that seldom gets that kind of unadulterated respect and affirmation that one can’t help but be moved. And after having witnessed literally thousands of heterosexual films end similarly I felt a special fondness for the queer Sum of Us.

In a time when the LGBTQ community was searching for more radical solutions to centuries of homophobia for and general ignorance of their existence, were testing crueler and perhaps more honest evaluations of what all those years in the closet had meant to the minds and souls of queer folk, along came an Aussie comedy that painted a picture of family life not so very radically different from that depicted by American simpleton mythmakers like Robert Frost, Frank Capra, and Norman Rockwell. Your grandmother could like this movie—even if she wasn’t a dyke.


Posted by greenintegerblog at 2:06 PM