Near the very end of Gregory LaCava’s 1933 comedy Bed of Roses Franklin Pangborn suddenly shows up in his usual overstressed squirrel-like role, this time selling women’s panties as a department store floorwalker where the central character Lorry Evans (Constance Bennett) also works. There is no true reason why we even need to identify him as being gay, except that, as usual, his character gives off a prissy, too proper, and overly harried sense of being selling what we are certain would never cross the hands of a normative cinematic he-man except perhaps for pulling if off from a female body. In the few seconds devoted to his busy dialogue, moreover, he even gets the opportunity to show his appreciation for the piece of clothing that he holds up to display, while also taking a second to assure an inquiring customer, the Mae West-like hip- swinging Mrs. Minnie Brown Oglethorpe (Pert Kelton) that her friend is still working at the store a few yards from where he stands. The scene has no reason to be Pangborn’s except that he has played similar roles so very many times and so well that we even recognize him as the type, much like Pangborn was in real life, a man who lives with his mother and an occasional boyfriend, and accordingly is totally comfortable in an atmosphere of pushing, squealing, chattering, eager women. He made the act of coping with shopping women an art in the way that Humphrey Bogart made lighting up his own and a blonde beauty’s cigarette. 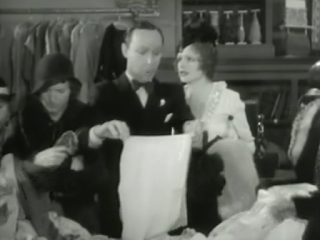 Vito Russo quotes a RKO studio release of the same year for another of his roles, this for Professional Sweetheart:

knuckles on your proboscis. But call him a sissy on the stage or

screen and he’ll pat you on the back and call you “pall”....for

Pangborn is famous for his portrayals of “sissified” characters

....those chaps generally known as Adelbert, who go in for the

arched eyebrows and a mincing walk...and in RKO’s Professional

Sweetheart, he plays a typical role...that of a male dressmaker who

flutters about...adding to the general hilarity of the uproarious

Pangborn may have winced if you described him as a pansy, but I doubt very much if he might have slugged you. He knew that he had a power over women that few other of the males in his films might even have imagined.

Strangely, one of Evan’s central male beaus in this tough comedy, New Orleans publisher Stephen Paige (John Halliday)—best remembered today as Katherine Hepburn’s father Seth Lord in The Philadelphia Story (1940)—who Evans encounters on the boat that might have taken her from prison to New Orleans, might be best described as a “woman hater.” When she finally arrives in New Orleans, she looks him up pretending to be a West Virginia news reporter, in truth seeking an eligible bachelor to prey upon, knowing that such a smooth-speaking, straight-thinking, respectable man is the easiest to push into a comprising situation which, with any luck, will keep her in room, board, and fashionable rags for a long time to come. 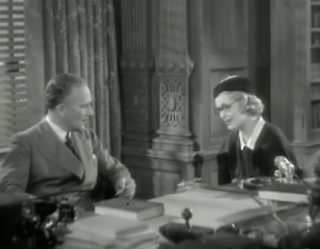 He admits immediately that that when told a woman reporter was waiting to meet him, he expected a “fat frumpy sort of thing,” and quickly sizes up her “interview” as being less interested in his career than in his personal being. Being the kind of man who openly supports the legal restrictions of prohibition, he sports of fully stocked bar which, with a little of her natural-born chicanery permits the double-crossing man-hater to get him drunk and before he can even wake up from what knocked him out, convince him that he owes her and his entire society an explanation for a night-long affair that never happened.

Paige perceives her money-grubbing tactics immediately for what they are and calmly swallows his pride along with the stomach pill with which his butler provides him. “How much do you want?” he calmly inquires, to which quite expectedly Evans, taking up her various well-learned rhetorical poses, answers: “I just want you?”

“Well you can’t have me. I’m a respectable citizen. At least I was a respectable citizen until you tricked me into doing something I didn’t want to do.” As she threatens suicide and terrifying racket to announce to the world just how wronged she has been, he quietly tells his butler to “Tell Henry to get the car ready. We’re going out to look at apartments.”

In a sense, he punishes her perfectly, locking her away in a bed of roses from which she is permitted little escape to mix with her friends or the other man, from whom she’s also swiped a significant amount of cash, the handsome cotton barge captain, Dan (the favorite hero of the decade’s comic romances, Joel McCrea.)

While Paige traps her in a closed relationship based on his complete knowledge of just who she is and his needs for filling his stomach and satisfying his occasional sexual desires, Dan has unintentionally captured the heart that she and her friend Minnie never knew she even had.  Ensconced in an elegant apartment overlooking what appears to be the French Quarter, Evans becomes so stir crazy that she truly imagines herself joining up to serve her life on a barge in the arms of the lean stargazer eating nightly meals of catfish.

Strangely, Paige is even amused by her “ridiculous” love and is willing to let her go if only she tells Dan everything about herself, a request she simply cannot fulfill for fear of losing the one man whose kisses finally reveal to her what love is all about. 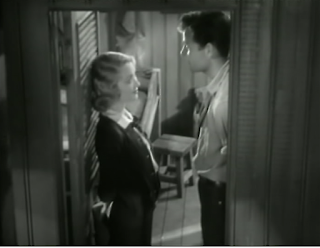 Trapped between two extremes, Evans goes to work in the department store from whence the selfish Paige, eager to amuse himself through her has he has in the past, tries to woo her back. It doesn’t work, of course, and inevitably Dan finds her, and asks her all over again whether she’s be willing to roll down the river with him—with which such silly plot never cease until we hear the heroine say yes.

The original critics and audiences evidently could not quite forgive Bennett’s Evans for her double-dealings, but adored Pert Kelton’s courser man-handling character Minnie who definitely wore the pants in her marriage to the Boll-weevil terminator, Ogelthorpe.

Posted by greenintegerblog at 4:08 PM