Hal Roach’s 1940 film Turnabout is described by Vito Russo in The Celluloid Closet as a “harmless sex-role farce,” a film which, in fact, is not truly an LGBTQ film nor even a cross-dressing comedy, although the argumentative happy couple at the center do change “voices” and, almost incidentally, normative male/female attire; basically, however, it is closer to the kind of early feminist films such as Alice Guy Blaché The Consequences of Feminism (1906) and Clyde Cook’s What’s the World Coming To? (1926) or The Warrior’s Husband (1933) intended to explore alternate world views rather than focusing simply on the comic potentialities of switching the roles of male and females to express imitation or confusion in a reversal of sex or gender—definitely something that might rile conservative establishments such as the Breen office and the Legion of Decency without actually breaking any of the written rules of the Hays Code. 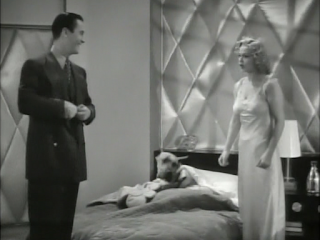 Yet critic Richard Barrios not only devotes several pages to this work, but features a photograph from it on cover of his insightful Screened Out: Playing Gay in Hollywood from Edison to Stonewall, revealing just how delimiting both the Hays Code and the PCA (the Production Code Administration) had become beginning in 1934. Barrios joyfully lays the blame on one of the greatest of on-screen sissies, Franklin Pangborn, who, he points out had 26 roles in 1937 alone, many of them movie sissies. It’s clear that Pangborn had long been on Joseph Breen’s radar. It was one thing to be a sissy but to represent an actual interchange or relationship between a heterosexual and such a deviate figure was most certainly, in Breen’s vision, against the rules.

In this case Pangborn plays the head of a company who hopes to use of the services of the Manning, Willows, and Clare advertising company. The Pangborn character, deferentially named for the significant sissy Pingboom does not like the services of Pil Manning (Adolpe Menjou) or Joel Clare (William Gargan), the first a closet alcoholic and the second a confused business idiot, but will not be satisfied until he meets with Tim Willows (John Hubbard), a truly homophobic jock who outrightly admits “I don’t like swishers” and is afraid if he meets with Pingboom he might slug him within minutes. Knowing this, certainly detracts from any of the comic charm of the hero of our story, who keeps throwing his detested pansy into the arms of Manning and Clare; but the day Pingboom has insisted that he must meet with Willows on the very same day that—frustrated with each other’s complaints about their daily lives and each claiming he or she would love to live each other’s “easier” lives—the Willow couple Tim and Sally (Carole Landis) are transformed by their bedroom sculptured “idol” Mr. Ram (Georges Renavent) who comes alive to grant their mutual wish. 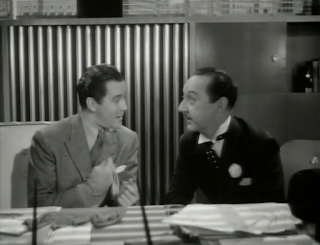 While Tim cannot bear to be in the same room with the sissy, Sally playing Tim for the day obviously finds him a kindred soul, the two getting so nicely that Pingboom joyfully pays out $10,000 for an add while chastising Manning and Clare for their rudeness. Evidently, his company makes women’s stockings, and in the film version we have today, Tim/Sally can be seen lovingly holding a stocking as he appreciatively admires Pingboom’s demeanor, the two obviously having become good friends. In the original, apparently, their friendship went even further, verging, Barrios describes it, “perilously and amusingly on gay bonding. ‘They’ve kept us apart too long,’ Pingboom gushes, as the bond between client and employee seems to spill into the personal arena.”

Breen wrote director Hal Roach, “This characterization of Mr. Pingboom as a “pansy” is absolutely unacceptable, and must be omitted from the finished picture. If there is any such flavor, either in casting, direction, or dialogue, we will be unable to approve the picture.” Nor was he willing to permit Tim’s characterization of Pingboom as a “petunia” or his statement “The guy swishes, and I don’t like swishes.”—an admonition with which most of the gay community today might agree, but for very different reasons. Even the stage direction “he flutters out” was verboten.

Although there is plenty of winking and nodding by all his associates about Tim’s sudden female affectations, particularly his high voice which they winkingly describe as laryngitis, the rest of the film is pretty uninteresting. Sally as Tim, somewhat inexplicable, takes umbrage on her husband and his associates use of two women who pretend to be Tim’s relatives who fawn over another client who is planning to cut his spending for his pineapple juice account, and spoils the deal which consists of one of his largest accounts. 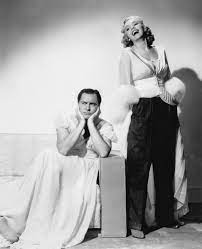 Tim playing Sally, in turn, bored with the chit-chat of his associates’ wives who admit how they lie and cheat on their husband regarding their clothing allowances, that she/he tells them how their bedtime attire of mudpacks and hot water bottles makes them sexually undesirable to their husbands, Sally’s “friends,” in turn, wondering how she has come by this information if she hasn’t been meeting up with their husbands on the sly, accordingly, cutting off all further relationships with their former luncheon companion.

All of this is rather bland stuff compared with the Pingboom / Tim romance, and once the married couple, distressed by their shift in identities pray for the idol to turn them back into themselves, they quickly work to fix up the problems they created for one another during the day. But the Pingboom “affair,” even as censored, isn’t so easily washed over, and the Hays committee and the Legion of Decency folk were so busy worrying about how Roach might try to get around them, they almost forgot that at film’s end, Ram is able to change back everything—but forgets to reassign Sally’s pregnancy, leaving the delivery to jocko Tim. That switch remains in the final version of the film we still have today, to be repeated later in Jacques Demy’s A Slightly Pregnant Man (1973) and earlier in Michael Gordon’s representation of Rock Hudson in Pillow Talk (1959).

I’m not sure that, in hindsight, Roach’s Turnabout, even without its substantive cuts, is something of great interest, although with a cast that includes Pangborn, Landis, Menjou, Mary Astor (as Marion Manning), Donald Meek as the valet, and Marjorie Main, once more playing a cook, one could certainly do worse.

But I do love Barrios’ insistence given the dark days of queer hysteria that had descended upon Hollywood that “you can still feel, as Roach puts Landis and Hubbard and the cast through their fey-frenetic paces, the cheerful whiff of sedition in the air.” For the next couple of decades you had either to read between the lines or find a way to watch the growing independent film world of Curtis Harrington, Kenneth Anger, and those who followed.

Posted by greenintegerblog at 4:13 PM