Canadian director Phil Connell’s 2020 film Jump, Darling seems to ask the question, asked over the years thousands of times, that has no one answer: “Why does someone perform drag?”—especially an apparently sis-gender good looking gay boy like Russell (Thomas Duplessie)—who, after leaving his over-doting, well-meaning mother (Linda Kash)—has moved to Toronto to become an actor, and is now in a long-term relationship with a wealthy lawyer, Justin (Andrew Bushell).

Russell is asked twice in this film why he wants to live the life of a drag queen, but if you’re looking for answers, particularly easy ones, in this moving if somewhat predictable film, forget it. The movie has a lot of other semi-related things on its mind.

Before we even discover what the central character’s issues really are, Russell breaks up with Justin, presumably because of his lover’s disapproval of his rookie drag career as opposed to his more “normal” aspiration to become an actor. Before we even get a chance to see his routine, Russell falls down drunk of the barroom floor and soon after flees his town house with only a piggy bank and a few expensive bottles of wine to barter his way via taxi back to his provincial hometown in Prince Edward County to his grandmother’s house where an old car that she has promised him in a recent greeting card sits unused in her garage. Fortunately, he’s happened upon a cab driver who loves wine and appreciates their pricey labels. 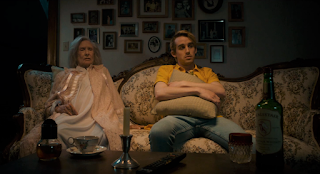 After a quick kiss and night spent with his tough-loving grandma, suffering from the slow onslaught of dementia, the disappointed drag star takes the wheel of the car to travel into the arms of Morpheus to Hades through the car’s emissions, until granny awakens, opens the garage door and gently nudges her grandson back into consciousness.

By the very next morning Russell swears he’s off again, this time to an acting school whose address he evidently still doesn’t quite know, his grandmother suggesting that it might be better to discover the school’s location before attempting to visit it, using the subterfuge of her naked body desperately in need of a shower to lure him back from another taxi ride to nowhere.

Realizing that he might be better off caring for her instead of rushing off without  even another bottle of vino, Russell determines to stay on, forging a check for $4,000 from her account in order to tide him and her over—since she has nothing to eat in her refrigerator and only a few agèd frozen meals in her freezer.

We’ve seen this movie before, wherein the tortured youth moves in with the elder family member to fortify themselves against the normative expectations of the middle generation. In this case his mother Ene, waving the flag of “trying to do the right thing,” is determined to place her mother Margaret in an assisted living facility against her wishes and, discovering the location of his missing son, to try to nudge him back to the arms of Justin and his abandoned acting career. Neither of them apparently can bear with what her railroading appearances in their lives.

Although cinematographer Viktor Cahoj presents us with a number of beautiful images of rural Canada, and turns Margaret’s old farmhouse into a virtual fun house of half-open doors leading to empty rooms, treasure-filled closets, and an attic, stuffed with trunks of memorabilia, where Russell makes his bed, Jump, Darling might have landed on the cutting room floor of LGBTQ memory were it not that Connell chose the then 93-year old Cloris Leachman to play Margaret. Leachman, believe it or not when on to act in two further movie roles before her death the following year in 2021.

The former Miss America contestant played many roles throughout her career that exposed her aging body in a way that no other actress might have permitted. And in this one she plays her age with a kind of feisty gracefulness that allows her character to show her disdain for those who embrace well-meaning normalcy like the town busybody Jeanne (Jayne Eastwood) and her daughter while also challenging and embracing some of her grandson’s problems and eccentricities. She truly takes pleasure in the meals her cooks for her, while tartly commenting on his nighttime outings and household redecorations. She realizes, moreover, that his presence is the only thing keeping her out of the Millbrook Care Home. As Glen Gaylor, writing in The Queer Review observed of Leachman’s performance: "You can’t easily manufacture her presence, her force, and her power. You see every wrinkle, every aging bone, and every slow, careful movement. I savored it, knowing this could easily be one of her last picture shows."

Meanwhile, in a far less believable and more meandering style, Russell uncovers the local bar run by Hannah (Katie Messina) which seems to mix liberal town straight couples with the local queers, where somewhat inexplicably he develops an audience for his drag routines while courting the evidently bi-sexual bartender Zach (Kwaku Adu-Poku) who appears to be equally fascinated with and disgusted by Russell’s drag-personas, but can’t quite keep his hands off the cute new white boy who has chosen him from their first encounter as his lover.

Although Russell performs some of his best numbers at this unlikely venue, including his version of Scissor Sisters and Rough Trade’s “High School Confidential,” in which he almost simulates a lap dance with Zach in front of his girlfriend, the film moves further into fantasy territory when a Toronto impresario (Mark Caven) shows up in the small town john in an attempt to lure Russell, who has now renamed himself “Fishy Falters,” back to his Toronto drag bar or when, in an attempt to pay back his granny, Russell attempts to get a gig as a DJ and performer in a bar that doesn’t even charge for entry and is not really likely to pull in an audience just to watch him perform. The boy seems to be losing his sense of logic.

Meanwhile back on granny’s old house, the two suddenly discuss the somewhat hidden truth of family life, particularly the fact that Margaret’s husband was an alcoholic and drug addict who killed himself by jumping from a New York City high rise, facts which leads her to worry that her grandson may be repeating some of the same patterns. We also discover that early in her life she was a figure skating star that was ready to join the Ice Capades until World War II brought her too her senses. Given the costumes and makeup worn by many figure skaters, we realize that perhaps early on in her life Margaret was heading toward a life not so radically different from that of her grandson.

Finally coming to terms with the fact that whatever it is that he desires, the boy will not discover it in the small town where he grew up, he announces to his beloved grandmother that finally he must move on, he attempting to protect her by hiring someone to check in on her several times a week and promising to visit her on weekends.

Margaret, however, realizes that his plan won’t work when his mother hears of it, and begs him for one more favor before he leaves, to buy her pills, strong enough to do her in quick. She realizes, she explains, that she no longer has anything to live for. He recapitulates and tells her he’ll stay, but she insists that he explore the career he now seems determined to embrace.

As he drives away in the car she has given him, he suddenly turns back in the horror of recognition of what he’s given her permission to do. But as he imagines himself and Zach as a couple regularly visiting the now almost comatose old woman in Millbrook Care Home, he turns back toward Toronto, recognizing that just as he must become a drag queen so it has come to be her time to join Morpheus on a voyage toward death.

At the Toronto bar where he signs away his life for a pittance of salary, the famed Toronto drag performer Tynomi Banks asks him for the second time why is he devoted to drag: are you alcoholic, depressed, is a deep woman closeted inside of you waiting to get out, or are you simply into the quick adulations of the crowds? Give it up, he demands, it can only lead to unhappiness, as he recounts how he (Sheldon McIntosh) got involved. Earlier Russell has tried to explain to a couple of his straight former high school peers that drag had nothing at all to do with either sex or gender, but was a statement of dismissal for the rest of society’s disdain. My dances say “fuck it,” he declares. But after Banks’ warnings, Russell can only mutter something to the effect that he doesn’t know why he performs in drag, only that he must.

Strangely, his premiere at this club is less a dance than a kind of “living statue,” a tableaux vivant dedicated to his grandmother, as he dresses up and positions himself as the figure ice skater he has seen in the picture of her as a young woman. There is no indication of how the audience receives his performance, but surely it must have touched the heart of his mother who has snuck into the bar to see what is precisely that son does.

If Jump, Darling is at times a bit simplistic and even confused in its vision, its heart is so pure that for the first time in my life I cried while watching a drag queen perform.

Posted by greenintegerblog at 5:10 PM