Egon Furst (Curt Bois) believes that he has the perfect job in this filmed version of the German Weimar operetta Der Fürst von Pappenheim believes that he has a perfect job, managing ten beautiful runway models at a high scale Berlin fashion house. His job becomes far more complicated, however, when the beautiful Prinzessin Antoinette (Mona Maris) shows up on the runway, her face hidden behind a mask as she flees from an arranged marriage with a prince in whom she has no interest.

I have been able to piece together a plot only from sentences from several sources, but apparently Egon quickly falls in love with the princess, and when the family sends out Antoinette’s uncle to retrieve his rebellious niece, he gets the wrong girl. 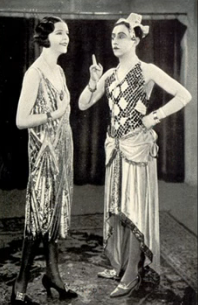 Commanded to organize a Pappenheim company fashion show at the castle, Egon and his model’s appear along with Antoniette. In this case, Antoniette takes over the role of the emcee, while Egon dresses up as a beautiful model to replace her in the ranks.

Bois as Egon was evidently quite a stunning crossdresser. He is best known to US audiences as the pickpocket in the early frames of Casablanca (1942). At the end of the show, apparently, the female in male drag emcee kisses her new boyfriend Egon appearing again as a male, her unsuspecting father who has observed this, responding with a kindly wink of the eye, “I may be old-fashioned, but I still prefer to kiss a woman’s lips.”

The Berlin Bundesarchiv-Filmarchiv evidently holds a remaining copy of this silent work.