death of the pansies

The 1933 film of The Warrior’s Husband, based on Julian Thompson’s 1924 play which starred Katherine Hepburn, was never released on DVD and, despite a 1970 showing on TV has not reappeared in the general media, although George Eastman House and the Museum of Modern Art both have copies. Yet both Vito Russo and Richard Barrios have written significantly about it. And given my travel restrictions I shall have to rely extensively on their comments.

This film is important for several reasons, beyond the simple fact that it presents the males of Pontus, the land of the Amazons, as a bunch of sissies. It belongs to the nascent on-screen depiction of the male-female role reversals of I’ve discussed in Alice Guy Blaché’s Les résultats du féminisme (The Consequences of Feminism) (1906), Clyde Cook’s What’s the World Coming To? (1926), and  David Butler’s Just Imagine (1930). But the very fact that I might add a last phrase to my previous sentence, “as a bunch of sissies” should make it quite clear how very exceptional this film is. As I’ve previously stressed, an occasional pansy strewn about a landscape of heteronormative figures was before 1934 perfectly permissible, but when they joined forces, several pansy’s appearing in the same frame, even before the reign of Joseph Breen the early Hays Code saw red. And in this case, as Barrios reminds us, Fox studios let it be known that a number of real-life drag artists had been hired to portray the “men” of the country of Pontus. Barrios notes:

“The troupe had been the chorus of the BBB Cellar Revue, a gay nightclub show billed with the slogan, ‘Boys will be girls!’ Variety reported that the temperamental queens would not accept the standard men’s dressing room facilities and had to be mollified with a new deluxe changing room with lacy appointments.”

Although there is apparently no record regarding this film in The Production Code files, clearly the censors came rushing with scissors in hand to this final assault. Variety reported that “the panze scenes” were trimmed, which explains, Barrios muses, the “absence in the film of the boys-will-be-girls BBB Chorines, who seem far less in evidence than some rather large spear-carrying women.”

What is left in the film is still rather larger than the standard 1930-1933 sissy visitations to otherwise heterosexual films. I quote Russo at length:

“The Warrior’s Husband takes place in 800 B.C., when the Amazon women...’had all the rights—and pretty good lefts too. Women who believed that a man’s place was in the home.’

In an outrageous performance, Ernest Truex plays Sappiens, a ‘progressive thinker’ who enters the court of the Amazon Queen Hippolyta (Marjorie Rambeau) to the tune of ‘Oh, You Beautiful Doll’ and sits curling his beard while the women make all the important decisions on affairs of state. 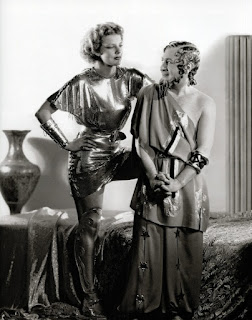 Two visiting Greeks, Homer and Theseus, enter the court and are shocked. They are also shocking to the gentle men of the Amazon world. Truax calls them ‘hussies’ and berates them for shaving their legs to be like women. When Hippolyta congratulates them for being ‘like women of the world,’ Homer says to Theseus, ‘By the gifts that fortune hands me, she takes you for a pansy!’ Examining Truax more closely, Homer is outraged but not speechless. ‘What is this creature?’ he demands of Hippolyta. ‘I abhor it! Why even the Greeks have no word for it.’

Actually the Greeks had several words for it, but the movies had Ernest Truex, and there were times when words are unnecessary. In a battlefield sequence, Truex lounges inside Hippolyta’s tent, preening and adjusting his bracelets. A handsome Greek messenger arrives. Truex takes a long, hard look at the soldier and greets him by wiggling five fingers. The messenger takes a long, hard look and mutters, ‘You find them wherever you go.’”

Although recognizing that there has obviously been a “denaturing” of the film beyond Fox’s intent, Barrios finds it rather tame fare, the most intriguing aspect of it being to imagine if it had been a bolder film. But clearly the Hays Code people were shaken by its possibilities and used the occasion of this film and other “missed opportunities” such Our Betters to send out a memo in late 1933 announcing that “pansy” was now another of the forbidden words. When a few months later, as Russo reports, Raoul Walsh’s Sailor’s Luck showed a lisping attendant in a bathhouse, James Dunn notified his sea-faring friends: “Hey fellas, etgay the ansypay!” to which the ansypay responded, wiggling his five fingers, “Hi, sailors?” 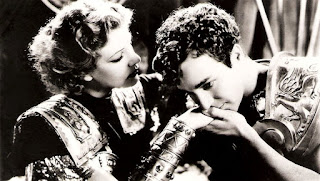 Back in The Warrior’s Husband, when the Greek army under Theseus (David Manners) invades in pursuit of the queen's "magic girdle"—the item that protects queen Hippolyta and her sister Antiope (the latter role played by Hepburn on stage)—the appearance of real men on the scene is strange and unnerving to the women of Pontus. Struck by Antiope's beauty Theseus woos her and, reluctantly at first, she falls in love with him. Realizing the value of male leadership, the Amazons willingly allow the men to assume control, and the gender of reality of 1930 is returned to the screen, relieving any fears that audience members may have had about the detrimental influences of Walter Lang’s film.

As another commentator fatefully observes: “If The Warrior's Husband, quite racy for its time, had come along the following year it could not have been made as it was in 1933 prior to the Hays Code crackdown.

Posted by greenintegerblog at 11:18 AM