Jerry Tartaglia | Is What Was

Having made some 47 some films during his most active period of his career, 1972-2017, Jerry Tartaglia’s works are often hard to find and are nearly uncategorizable given their broad range of subject and methods.

Discovering that he has cancer, however, the director has recently attempted to slowly bring his vast archive to a wider audience, posting some of his works by private invitation on-line. That invitation allowed me to see four of his works I’d not previously written about, one of these his remarkable 2008 DV of 22 minutes, Is What Was, a study in how to represent the Holocaust, particularly as it concerns the Nazi incarceration and extermination of gay men during World War II.

Even the subject is somewhat controversial. Among some commentators of the Holocaust even focusing on those, far fewer in number than the millions of Jews, who were sent to the camps with pink triangles where they too suffered and died simply for being who they were, raises hackles. When in 1983, Alan Johnson remade the Ernst Lubitsch comedy To Be or Not to Be, adding a gay character named Sasha, as Vito Russo notes in The Celluloid Closet, “There were angry protests made against the character...by individuals and groups who bitterly resented the equation of Jews and homosexuals as equal victims of the Nazi purges. It was as though the equation somehow minimized the suffering of the Jews and worse, as though filmic references to the Holocaust were some sort of contest to determine who suffered most.”

But for Tartaglia—always searching for a way to grab filmmaking away from those who would make it a passive experience—the question is how to approach the subject without simply turning it into a documentation of a long ago past that has little significance to our own lives. 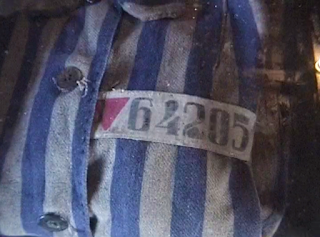 Critic Brandon Judell sets up some of the director’s early dilemmas in his review of the film:

Is What Was opens with a young man photographing a prisoner's uniform encased in a plastic box. There's a close-up of the sewn-on Pink Triangle and the unknown victim's assigned number, 45874. Then a flashback to 1933 as "Das Lila Lied" (The Lavender Song), a gay anthem of sorts, plays:

We are just different from the others

Those who love in boredom

With their uptight moral codes

They could experience a thousand wonders

We're children of another world.

As the song continues, photographs of Nazi architecture meld into leisurely taken photographs that German soldiers snapped of each other.

Suddenly the film stops. Tartaglia is not satisfied. He has decided to redo his film. With white letters flashed upon a black background, he explains:

‘This opening is not viable for several reasons. It is a failed attempt to recreate an imagined situation rather than portraying reality. The initial design of this film involved the documentation of sound and image to examine the formulations of Queer Identity, rather to create the imaginary. The Holocaust and the anti-gay hatred and persecution of the Nazis is not imaginary. It is what was. That hate is still alive today in America, albeit in a state of remission.’"

Tartaglia begins the film over again, this time trying a new approach by beginning his movie with an exterior view of Sachsenhausen, showing us drawings of the Nazis torturing homosexuals, the prisoners hanging from poles tied up by their wrists, and then showing us images the poles themselves, three hanging posts in a row in the prison courtyard. 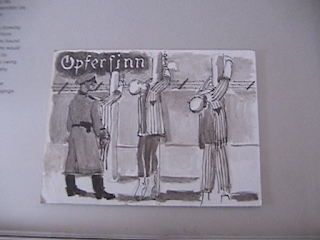 Still he is dissatisfied. We need to understand the history, he proclaims, a rich one given the fact that much of what we recognize as the issues of homosexuality today began in the Weimar Republic with the writings of Karl Ulrichs and the later popularization of Ulrich’s writings and the activism of Magnus Hirschfeld, who through his extensive writings, his medical facilities, and museum of sexualities, and his constant proselytizing helped to lay the groundwork for what today we recognize as the LBGTQ community, to say nothing of the thriving gay, lesbian, bisexual, transsexual, and transgender world of Berlin just before the rise of the Nazis, the last of which Tartaglia doesn’t even touch upon.

How can we understand ourselves, our own position in relationship to the larger society if we cannot bring the constantly erased history of gay life from the past into the present? You can almost hear the director’s impatient screams as he suffers over how to reveal that past without historicizing it, lulling the viewer back to sleep with documentation rather than an enlivening experience that he can take with him or her back to the streets.

In his brilliant study Gay Berlin: Birthplace of a Modern Identity (2014), Robert Beachy laments the same dilemma when recounting that with the outlawing of all homosexual activity, a large swath of Germany sexual history would seemingly disappear from memory. Today, he observes, Berliners and other Germans colloquially describe their annual gay pride parades as CSD (Christopher Street Day), without recognizing that Berlin was once the living center of LGBTQ life.* 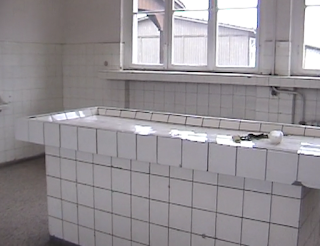 Tartaglia begins again, this time trying to imagine a film without language. "I want to make a film that doesn't rely on words," he says, as his camera scans the gleaming surfaces of a Sachsenhausen room in which we can only imagine Jews and gay men were examined by medical doctors, experimented upon, or even castrated to see if that might “cure” their homosexual “orientation.”

Suddenly, the director attempts another tack. Since we cannot truly know what the Nazis were thinking, we cannot truly know what the arrested gay men were feeling and expressing to one another, perhaps we must rely upon what gay history has always depended, “gossip.” Since gay history has been expunged by the historians, the Church, and by the heteronormative society in general, it has survived as hearsay, insinuation, suggestion. Perhaps that is the direction his film must take.

As if to gossip on the entire Nazi regime, Tartaglia shows us snapshot after snapshot of Nazi soldiers, officers, and associates playing in their off hours in extremely homoerotic poses, hugs, kisses, clowning, and sly smiles, clothed and naked,  that suggest more than simple camaraderie. Through image after image Tartaglia gossips simply by representing what the Nazis themselves left behind, images of something very different from the evil they enacted upon others. 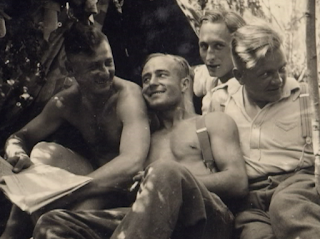 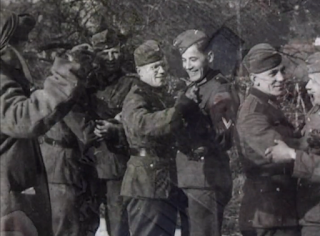 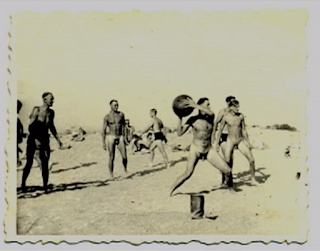 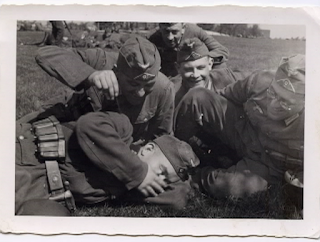 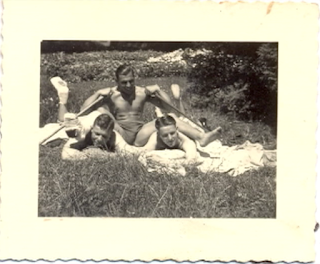 But in this process, the director recognizes that there is a great danger of normalizing what musn’t be. These were not men of love and conscience. Why he wonders, as do we, could these otherwise seemingly sexually engaged human beings not recognize the other in themselves? How could they not see their own sexual playfulness and urges, even if not directly resulting in homosexual activities, in the men they were torturing for the very same natural urges? “If people cannot see themselves in the queer, they can only run from it in fear?” declares the narrative voice.

Conscience arises from our abilities to understand our own selves in the other. If we cannot see ourselves in the different, we can only try to make them over into our ourselves which, obviously, can only mean to destroy them when they do not match our image of ourselves, Tartaglia bemoans.

These laughing, posing, clowning boys were not men of conscience. The gossip their photographs betray represented lies. Was their existence all a pose, we have to ask? A way of behaving that had been learned without any real feeling within? "A positive, pleasant, and polite exterior can mask the most horrific internal reality," notes the narrative voice of the film.

If we might read the Nazi photographs themselves as part of queer history, how can we comprehend it? And how can we understand ourselves without a past, without a history?

Again and again, Tartaglia attempts to tell his story, or perhaps I should say to “realize” his story. But how to do so if we cannot know the past, and how to help us know the past without hypnotizing us through an educative lecture?

Obviously, we can know ourselves only by actively searching out our past by ourselves, but who is up to the that task the film’s director seems to ask us in complete frustration?

Tartaglia, in different ways, has made that his life’s task. As I have mine. But the question remains—with an open unjudging, uncondescending extended hand which often feels it is simply grasping air instead of flesh.

In some respects, this later film is one of Tartaglia’s most painfully personal works amidst a body of just such explorations. Is What Was is not a question as much as a statement that whatever “it” was “it” is still waiting to become something of the present, an “is” that will help guide us into our own inevitable pasts.

Posted by greenintegerblog at 10:56 AM