I believe it would be appropriate to describe the 2021 documentary about esteemed cookbook author and famed cook show host Julia Child less as a probing documentary exploration of her life and career than as a tribute to the beloved icon.

As one of three tall, slightly awkward siblings of a conservative well-to-do Pasadena, California businessman and his wife, the Smith college graduate, trained to become a socialite wife—what she herself describes as a “breedmare”—for some willing male of a Los Angeles family of her social standing—her father had hoped she might marry into the Los Angeles Times Chandler family—Julia stubbornly held out for a different kind of life which she ultimately began to discover during World War II working for the Office of Strategic Services—which later would rolled in with other such elite organizations to become the CIA—as a typist of secret documents. She wanted to become a spy, believing that her very height and heft would serve as significant cover.

Finally she was stationed in Ceylon (now Sri Lanka) where she met and fell in love with the self-taught intellectual and sensualist of all things having to do with art, music, food, and culture, Paul Child. According to his letters home and journal entries he at first as not very attracted to the husky voiced, long legged, fur-line lipped individual. Yet, spending time with her by introducing her to local culture and cuisine, and sharing with her his loves of music, art, and literature, her quick intelligence and sense of humor won him over. The two were married and at the end of the war were restationed in Paris, since Paul spoke fluent French.

In France for the first time Julia was served one of the simplest of French classic cuisine, sole meunière, bone-in English Dover sole fillet, pan fried in clarified butter, with lemon and parsley added to a butter a slight coating of “sauce,” deboned by the chef before plating. With that dish Julia fell in love with food and, in particular, with French cuisine.

Anybody who has seen Nora Ephron’s 1977 film starring Meryl Streep, Amy Adams, and Stanley Tucci, Julie & Julia which frankly is more engagingly and certainly less stringently outlines much of the rest of Julia and Paul’s story, will recall what happened. If as an American governmental official’s wife she was expected to stay and home, darting into public only to shop, visit museums, lunch other such wives, and attend governmental social gatherings, given her inborn wanderlust, Julia quickly grew bored and through the G.I. bill educational benefits signed up for a class at the famed Le Cordon Bleu cooking school as the only woman among 11 males being taught by a famous French chef an art that was traditionally limited to males only, women being dismissed as not up to the backbreaking regimen of the power-dominated French restaurant kitchens and deemed too weak to properly manipulate the heavy pots, utensils, and other culinary tools necessary to produce the great art that the French had come to expect of their food.

Stubbornly pushing her way forward, she learned and practiced French cooking daily at home, repeating and repeating recipes she learned until she brought to something near perfection.

Over the next 12 years, Julia, her friend Simone “Simca” Beck, and the more reticent master chef Louisette Bertholle worked on the transformational book Mastering the Art of French Cooking, which for the first time, even in France, attempted to collect the great recipes of French cuisine, explain their background, and describe in friendly detail what ingredients to use, what processes one needed to know to accomplish them, and how step-by-step to make them. 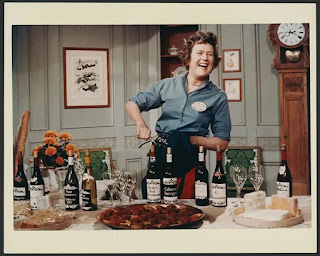 At the time, as this movie reminds us (I was there), mothers across the US were putting TV dinners into the oven for dinner, whipping up span delights, decorating jello molds, pouring cans of mushroom gravy over green beans and topping it with canned fried onions, or on special occasions, shoving a grisly rib roast into the oven, turning it on low, attending church services, and returning to cut it up the dried-out remains for Sunday dinners. A pre-cooked ham or turkey were considered serious culinary feats.

Meanwhile, typing up each and every recipe with double carbons, testing the results, and sending them back and forth between each other for commentary, the three created something that when they finally delivered it their editors at Houghton-Mifflin—who probably to this day cannot forgive their then publisher and editors—weren’t sure that such a book might interest the typical American housewife. Miraculously, an editor at Knopf was able to convince her equally dubious publisher and history was made.

This film argues that through this book alone and her soon-to-be popular Public Television show on Boston’s WGBH which begin, we are reminded twice in this carefully clocked documentary, with an omelette cooked to perfection on a hot plate. 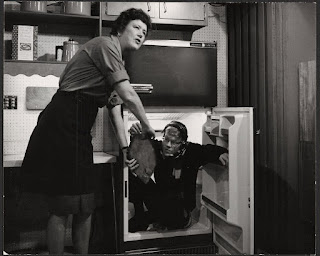 Within months the strangely gawky woman with an alternately high-and-low ranging memorable voice, and a joyful laugh was regularly entering American households, changing notions of what food was and how to cook and serve it. Over the years, Julia Child not only converted millions of housewives to get serious about food, but through her own presence paved the way for hundreds of other cookbook writers, women and male TV chefs such as Sarah Moulton, Ina Garten, Ruth Reichl, and Marcus Samuelson— all of whom appear briefly as talking heads in this movie—as well as others such as Emeril Lagassé, Bobby Flay, and Rachel Ray to name only a few. As Child herself insisted, “America was ripe for change, and there I was.” By her very presence she argued, “If I can learn to cook at my age, well, so can you.”

Julia also argues that Julia Child helped to complete transform Public Television programming itself, and through her insistence that women should join restaurant kitchens, helped to expand feminism.

Former Head of the Planned Parenthood Federation Cecile Richards testifies to her commitment to Women’s Choice, sometimes endangering her own book signings and further promotion of her career.

In their carefully paced checklist of her achievements, the directors also take some significant time to describe how, despite her apparent negative feelings about homosexuals, after her lawyer and close friend died of the disease, she suddenly became very active in helping to raise the national awareness of AIDS.

It’s clear from the evidence of this film and history itself that Julia was a transformer. So why shouldn’t she be celebrated on film? As critic Emily Heil wrote in The Washington Post”

“It seems like you can count on one hand—and still have a few digits to spare—the number of pop culture heroes we’re still free to admire, without asterisks.

Thank goodness it’s still okay to worship at the butter-spackled altar of Julia Child, the late cookbook author and food-TV pioneer. Julia, a documentary that examines Child’s life and influence on American cuisine and culture, goes down like a sweet crepe Suzette, and thankfully does little to complicate a lifelong fan’s feelings.”

A couple of people note how, despite Julia’s absolute devotion and love to her husband, that Paul himself seemed often remote, critical of others, and difficult to know. We are told of his later illnesses and final dementia, but the details are rushed over briefly as if they are, even in Julia’s own mind, of no great importance—although in one revelatory moment a friend describes her, upon leaving Paul in a special care institution, as breaking down into tears, something that Julia evidently did not often do in front of others.

What does Ruth Reichl mean by Julia’s stubborn dismissal of novelle cuisine, and what did Childs mean by mainly representing eating raw vegetables? Having such a remarkable influence on US eating habits, and always ready to embrace new cooking talents, why might Julia be so hesitant about encouraging new and often healthier eating habits?

And since the directors devoted so much discussion about her previously homophobic views, how specifically did her transformation to a supporter of AIDS causes occur, what did it precisely consist of, and how long did it last? Since even she admits that a great part of her audiences consisted of devoted gay fans, what she described as “homos,” this is a significant issue, not just of passing interest.

Writing in the Arizona Republic Felicia Campbell observed of the film:

“Difficult, intimate issues are glossed over or resolved so quickly that we aren’t given a chance to see Child in a nuanced way.”

That is clearly not the role of a “tribute.” Perhaps we shall have to wait for another film to get to know our beloved Julia more fully as human being instead of simply an icon.

Posted by greenintegerblog at 3:43 PM