Set in the Quartier Pigalle of Montmartre in Paris, Julien Duvivier’s 1960 movie Boulevard might lead one naturally to expect issues that might appeal to the LGBTQ viewer. After all the film focuses on a down-and-out ex-boxer, Dicky (Pierre Mondy), a dancer at the Folies Bergère, Jenny Dorr (Magali Noël), Giuseppe Amato (Jacques Duby) a gay painter, the Italian Benazzi family with a bored and sexually-interested daughter, Mariettta (Monique Brienne), and numerous others who in the same Pigalle building interconnected by their daily encounters with the “holy terror’ of a cute young boy who survives day to day by his street smarts and his willingness to take on nearly temporary job to raise enough money to eat, pay his rent, and take a girl out to a movie. 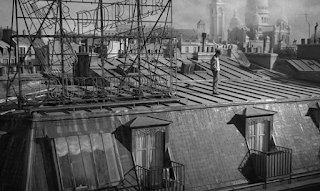 The charming rough-hewn kid, Georges ‘Jojo’ Castagnier, played by actor Jean-Pierre Léaud—who had just appeared in his break-out movie François Truffaut's The 400 Blows—has run away from his father’s bar-top apartment because his step-mother absolutely despises him. He appears to offer these varied individuals something they each desire. For Jenny Door, who lives across the hall, the boy offers, from her point of view, a outlet for her maternal instincts and, from his viewpoint unrequited love; down the hall the Benazzi mother sees him as another beloved child to feed and a possible future spouse for her quickly maturing daughter, while for Jojo she daily offers up some of the few morsels of food that make up his diet; her daughter, late in the movie, sees him as a possible young lover, and Jojo finally recognizes in her someone of his own age to whom he might be attracted; the homeless Dicky uses the boy to get a bed for a few hours of sleep, while Jojo wonders whether he might be a “fag” seeking out few moments of quick pleasure; and Giuseppe would simply love to get his hands on any part of Jojo’s lean muscular body, while Jojo sees him as a possible connection to earn some quick cash by modeling as Narcissus for a sculptor friend. 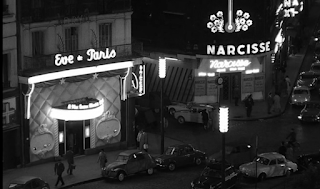 Unfortunately all of Jojo’s reasons for being involved with these neighbors ends disastrously, in part, because unknowingly Jojo, concentrating simply on survival, is a kind of Narcissus, staring  down from his rooftop viewpoint at the world as if everything below is a reflection of his own desires. It’s surely not accidental that one of the nearby nightclubs proclaims its name in bright lights to be Narcisse. Since they do not seem to serve his needs, he sees all the Parisians rushing through the streets below him simply as bastards and bitches, without truly offering anything to anyone else unless if coincides with his own desires.

As a romantic young boy unable to see anything within proportion, almost as if we were peering through a telescope in the wrong direction he perceives himself as successfully courting the nearly thirty-year old Jenny across the hall, and when Dicky actually makes of move on her, and later actually moves in with her, Jojo perceives it as a betrayal, turning the young hooligan into someone determined to destroy the older man, the boy even taking up boxing to beat the losing “champ” at his own game. 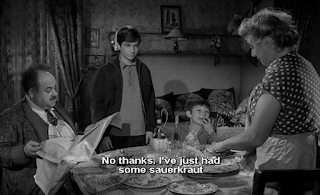 Whenever Mrs. Benazzi offers him some food, Jojo insists he has just eaten a huge meal despite the fact that he is nearly starving, settling instead for a small piece of dessert.  He mocks Marietta through most of the film, but finally when he recognizes her youthful beauty, after promising to  take her to a movie is furious when he doesn’t show up that she goes on a date with another young man. To get a job selling youth magazines, he steals his first stack of copies, although obviously later paying enough back to the newsdealer so that he might continue to survive by selling them throughout much of the film—that is until a policeman catches him without a selling permit. And unable to truly fight the ex-boxer Dicky he taunts him with the word “tocard” (“loser’), even after the man offers to take him to dinner and provide him with a loan. 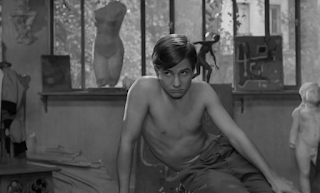 The boy finally accepts a job modeling as Narcissus for two queer men, his neighbor artist friend and an elderly sculptor, but when told he’ll be paid only when he sits for six sessions, he  destroys both their works of art. We can almost understand why his  step-mother, in Jojo’s own words, “hates” him—that is, until late in the film we are introduced to her and realize that she is truly detestable.

Despite all the terror of this young hellion, however, we cannot help but feel for him, suffer for his desperations, and hope that he might find a way out. Part of his problem, it is clear, is that he is simply a mirror for the heteronormative misogynistic society in which he has grown up where men perceive women as bitches, women see men as bastards, and heterosexuals detest and dismiss any queer behavior. In such a world even the born and bred Pigalle girl might be mocked because of her Italian heritage. If Jojo hates the world he stares down upon from his rooftop tower, what he observes is mirrored in his own behavior, and is, in part, why he can himself loses out in nearly situation. Without realizing it, the young Georges is as frozen in his behavior as those he mocks. 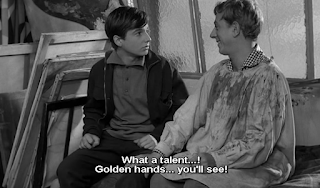 Although he dreams of making love, he is terrified of the human touch. When the effusive young painter puts his hand momentarily on his knee or enthusiastically hugs his young friend, Jojo quickly removes the offending hand and backs away from his embrace. Just as he denies being hungry, so he denies anything that might even be associated with love—until he finally gets up the nerve to kiss Mariettta, only to discover that his is not at all her first kiss. He cannot comprehend why she hasn’t slapped the man she hardly for kissing her on her lips.*

When he finally decides that life is simply no longer worth living, again like a romantic soul from fin-de-siècle Paris, all those he’s given up on rush to save him, strangely the journalist next door who has offered him the very least through this work, reaching out to save him from the leap. Whether or not the young “brat,” as Dicky describes him, has learned anything from the experience is uncertain. Particularly when his father, among the group of would-saviors, announces that his Jojo’s arch-enemy, his wife, has left him because he has twice slapped her face, we can only wince over the fact the two end the film in uncontrollable laughter, as if disagreeable women simply deserve such behavior when one is too weak to speak out against their differing views.

Besides, even with the wicked stepmother gone, Jojo certainly must recognize that he cannot go home again. He is doomed to the world he has created for himself. Certainly Dicky, at film’s  end, will spend the rest of his life seeking to beat the hell out Louis Arnavon, the boxer to whom he lost his famous bout; and Jenny will probably never have the courage to ask Dicky to leave her bed. Jojo, it is clear, will never be able to strip away the lies of reality in which he has clothed himself, never come to see himself as he truly is, just as obstinately he refused to appear in the nude for his modeling of Narcissus. At least Narcissus was erotically involved with his own body. Jojo appears to be still buddled up in the propriety of patriarchal France. Sorry, in the end, there is nothing very interesting in this film for the LGBTQ reader.

*I do realize that in this paragraph I am getting dangerously close to abetting sexual abuse. And I do want to assure the reader that I find any unwanted or, in particular, threatening sexual advances as something society should oppose and shun. Yet I cannot help but feel some contemporary definitions of sexual abuse and “unwanted” behavior seem uncomfortably close to simple prudishness, if prudery is ever simple. And I’ll grant the right of even prudish folk to be left to themselves. But I increasingly worry that in our post-(and still existent) AIDS society and the current infectious COVID-terrified world we may be moving toward an increased fear of bodily contact that may someday make the Victorians and Puritans appear to be like the most licentious of the Greeks and Romans by comparison. Queer life, as so many LGBTQ writers and filmmakers argue is very much about the body, not just the right to openly admit to being queer and to live with a marry a person of the same sex. And if we forget that, we will certainly, as filmmakers such as Jerry Tartaglia, Lionel Soukaz, and Guy Hocquenghem have argued, lose our own history. The propensity to touch, I would argue only half in jest, might be seen as one of the major differences between a straight and a queer being.

In Duvivier’s film, moreover, Jojo gives himself permission to spy upon an old lady, peep through Jenny’s  keyhole, push and slug offending males like the chasing policeman and Dicky, and bite Jenny’s hand, while rejecting any casual touch of a queer. To give him credit, the only time Jojo arrives home with food and drink, he shares it with the equally-starving gay painter.

Posted by greenintegerblog at 7:41 AM