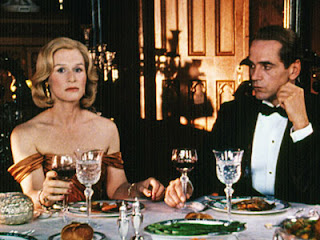 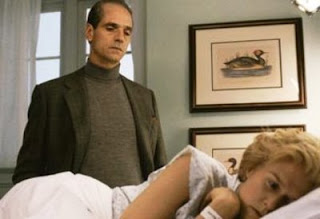 THE DEAD SPEAK
by Douglas Messerli
Nicolas Kazan (screenplay, based on the book by Alan M. Dershowitz), Barbet Schroeder (director) Reversal of Fortune / 1990

I never woke from this coma, and I never will. I am what doctors call
"persistent vegetative"—a vegetable. According to medical experts, I could
stay like this for a very long time—brain dead, body better than ever.

This voice, speaking from the dead, reminds one, somewhat, of the voice of dead man lying face-down in the pool in Billy Wilder's Sunset Boulevard. But at the time of these lines, delivered in the 1990 film by actress Glenn Close, Sunny was still living in her vegetative state, and the haunting reality of her being a narrative ghost did not end until 2008, 28 years after she fell into that coma.
Schroeder's film, like Sunny's audacious statement, is, in fact, less a simple recounting of the events that led to Sunny's husband, Claus von Bülow, begin accused and found guilty of attempted murder—actually two attempted murders—as it is a study in warring realities, an ironic yet respectful investigation into what it means to be alive.
On the surface any couple might wish to have been blessed as magnificently as the von Bülow's. Claus, a self-made socialite who took the name of his maternal grandfather, former Danish Minister of Justice, adding the "von" at a later date, was assistant to J. Paul Getty when he married Sunny in 1966.
Sunny, (born Martha Sharp Crawford) was nicknamed according to the manner of her personality. And why shouldn't she be "sunny"? She had inherited some 75 million dollars from her father, Robert Warmack, and upon her mother's death came into possession of Clarendon Court, the Newport Rhode Island mansion depicted in the film musical High Society (starring Grace Kelly, with whom Sunny was often compared).
From a former marriage with Austrian Prince Alfred von Auersperg, Sunny had two children, Annie Laurie "Ala" Isham and Alexander von Auersperg; and with Claus, Sunny produced another daughter Cosima Pavoncelli. The three children were said to have been close until their mother's overdose/attempted murder, when Cosima took the side of her father, the two other children accusing Claus.
As Schroeder portrays family life at Clarendon, the children, always formally dressed, are packed away in a formal living room, quietly watching television, while Claus and his wife fight a nearly silent war in the bedroom, icily arguing at times, but mostly keeping to themselves, Claus, following a strict pattern of daily behavior, the now "unsunny" Sunny, drowning her sorrows in alcohol and drugs. The tension between them is palpable, even as they pass in the night. They are both ghosts, both speaking from the dead.
Schroeder brilliantly characterizes the lavishness of their home, their possessions, their potential pleasures, yet despite the glitter, there is no gayness. Everything, as rich as it appears, is on the surface. The lives within this prison are indeed dark, and the viewer finds it difficult to comprehend what is occurring inside these seemingly blessèd folk. As Claus admits to lawyer Dershowitz's comment, "You are a very strange man": "You have no idea."
Jeremy Irons plays Claus von Bülow with a mannered reserve that allows this character, despite his despicably smug surface, a great deal of inner humor, which, in turn, allows us to imagine this "villain" as possibly innocent. When a discussion between von Bülow and Dershowitz turns to the testimony of a priest, the lawyer quips, "A priest? Well, a priest is the ideal witness: it's like getting the word of God." Claus quickly betters him: "I checked. God is unavailable." To Dershowitz's bleak assessment of his client, "You do have one thing in your favor: everybody hates you," von Bülow retorts: "Well, that's a start."
Against this bleak, hidden world, Schroeder counterposes the open, light-filled existence of lawyer Alan Dershowitz (played by Ron Silver), who, in a rambling Victorian-like house that might have been the home of the family of Meet Me in St. Louis, is surrounded at all times by legions of arguing students, people willing to do nearly anything for him just to further learn how the legal system works. Dershowitz and his students argue perpetually, but it is a friendly and nearly incessant chatter, filled with humor and, more importantly, an attempt at honesty.

Sarah: He had a gorgeous mistress and he went with an ugly whore?
Raj: You know, there are some things even mistresses won't do.
Alan Dershowitz: Like what?
Raj: I am not telling.

Dershowitz's is an active world, filled with quick basketball games, fast-food chow-downs, loud discussions, and, almost always, light. The rooms of this house are sometimes even shabby, crowded with cheap desks, corners stacked with papers. But it is Dershowitz's world that can save individuals, perhaps even the guilty. And it is this noisy, open space, rather than the marble, hidden one that can redeem lives.
As we are told, over and over, throughout the film, no one will ever know perhaps whether or not Claus von Bülow attempted to kill his wife. But everyone will remember that he was found innocent through the efforts of Dershowitz and others. Far more convincingly than Sidney Lument's 12 Angry Men, Schroeder reveals that the American judicial system can work—albeit with substantial financial resources—that guilt cannot be presumed even for those who appear most guilty.