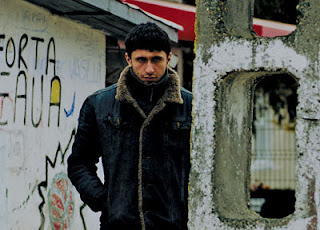 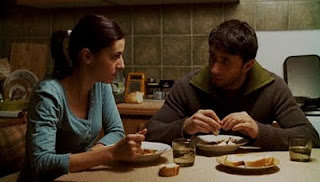 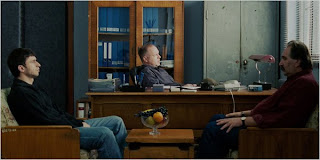 On the surface of Porumboiu's Police, adjective (meaning, literally, in one Romanian definition, "a novel or film about criminal happenings"), not much seems to occur, yet a great many stories get told in its "cracks," what the director refers to as its necessary silences.
Cristi (Dragos Bucur), a policeman (the English language equivalent of Politist, adj.) in Vaslui, Romania, has been assigned a case in which a young stool pigeon (whom he refers to as the Squealer) has reported that a high school friend has provided him with hashish, a criminal act. Indeed, through shadowing the high school student, Cristi observes the boy sharing a cigarette with his friends, Alex and a girl, several times between classes; the tested cigarettes prove positive for hashish. In short, the case is settled nearly before it has begun.
Yet Cristi continues to follow the two boys in an attempt to find the source, whom he believes to be either the brother of the provider or the brother of the young girl, who travels out of the country frequently and has been involved in a drunken accident. Perhaps, as he begins to suspect, the real "criminal" is the Squealer himself.
His superiors are understandably pressuring Cristi to finish up this small case by staging a sting against the three students, and hoping to get them to talk. Yet the crime for smoking drugs in Romania is three years or more in prison. Cristi, who has traveled to other European countries where small amounts of pot and hashish are not a criminal offense, is unwilling to ruin the life of a young boy because he has simply done a stupid thing. Besides, the government may change the law. It is a matter of conscience, he maintains, an act that would only bring him a lifetime of regret. In short, he is a moral man.
This is not everyone's kind of movie. My movie-going companion felt it was boring and obvious. For in an attempt to uncover the "truth" about the matter, Cristi must do what he does every day: stand around waiting for things to "happen," for the three to gather, the girl to visit her friend, the father and mother to drive off to work and to return home each evening. For long periods in his film, the director focuses his camera on Cristi's body beside a pillar of white-sprayed concrete and attached yellow wood, alternating between this central figure and the gate of the house he watches. At other times we simply follow the policeman through the streets of this deteriorating small city. Indeed, the camera tracks him several times as he returns to his warren of an office and to his small home, which he shares with his newlywed wife, Anca, a school teacher. For seemingly endless minutes, we witness Cristi eating, hear his wife play an obnoxious song on her computer (after which the two discuss whether its lyrics are images or symbols), observe neighbors and their pets going in and out of a small grocery store, and suffer a secretary busily clacking away on her computer. In several instances these clearly represent acts of absurdity, but they also function in other ways.
What struck me about this intense focus on the ordinary, in a film of straight-forward realism, was just how experimental and fresh those slow-moving scenes were. Porumboiu, in his beautiful camera positions and images, often posting the action just outside of the camera's range, creates a world of people and objects as rich as John Cage's musical silences. The crumbling sides of buildings, the crunch of stale bread, graffiti painted across a wall say more about the society in which Cristi functions than a police chase or exchange of gunfire might ever reveal. Major emotional events are caught in a single glance or a seemingly offhand remark such as that Anca makes: "I don't think things are working out between us."
As A. O. Scott intelligently commented in his review of this film in The New York Times: "The more you look, the more you see: a movie about a marriage, about a career in crisis, about a society riven by unstated class antagonism and hobbled by ancient authoritarian habits."
The biggest "action" occurs when Cristi desperately attempts to search out information on the families of the two boys and girl, trying to force his bureaucratic fellow workers to do the very research for which they were hired. Cristi is in a rush to uncover information before he is ordered to arrest.

When the final showdown comes, it is, strangely, not in the form of a shouting match, but in a humiliating putdown with regard to the meaning of certain words. When Cristi refuses to order a sting, insisting it is an issue of conscience, the Chief of Police determinedly forces him to read the dictionary definitions of "conscience," "morality," "law," and "police," all of which, in his Romanian dictionary, seem to push away from the simple English-language definition of an individual's "faculty or power" of "feeling to do right or be good." For Police Chief Anghelache (Vlad Ivanov) conscience is linked to the morality of laws enforced by the police, and is never open to personal exceptions. The decision for Cristi is whether he wants to remain a man or a policeman, part of an adjectival force as in a "police state" or an individual out of a job.
The final scene reveals what we knew all along. Living in the world we have just witnessed, it is impossible not to have regrets.

Los Angeles, December 4, 2009
(c) Copyright 2009 by the International Cinema Review and Douglas Messerli
Posted by greenintegerblog at 9:34 AM