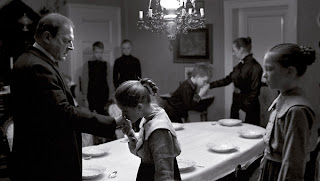 Here, the story comes to a conclusion. The War has been declared, and the Teacher is inducted. The voice of an old School Teacher who has been telling this story, now a tailor, has never seen Eva again. He has no real evidence, moreover, of who may have committed all these acts so long in the past.
In a sense, it doesn't matter. Everyone in this small village has in some way been involved in each of these "little atrocities" almost as preparations for the German and Austrian actions of the greater atrocities of both World Wars. Eichwald was simply a microcosm of the culture's transformation of good and kind people into fearful and hateful ones.

Los Angeles, January 3, 2010
(c) Copyright 2010 by the International Cinema Review and Douglas Messerli
Posted by greenintegerblog at 9:05 AM