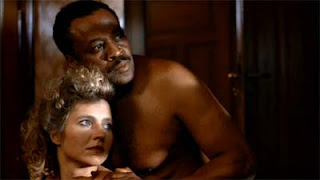 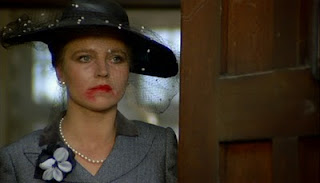 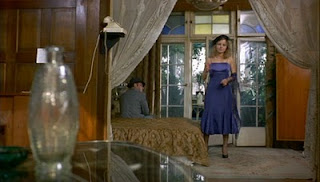 The first of Fassbinder's so-called BRD Trilogy (the Bundesrepublik Deutschland series that includes Maria Braun, Lola, and Veronika Voss) The Marriage of Maria Braun is clearly one of Fassbinder's most brilliant films, but also, one of his most puzzling.
The story itself, concerning the rise after the end of World War II of a young German woman (splendidly portrayed by Hanna Schygulla), who has survived during the war by trading her body for necessary commodities, is quite transparent—a story told perhaps hundreds of times in post-war literature. But Fassbinder's characters seem more complex, or one might say "confused," than typical stereotypes upon which these figures have been built. Certainly the most puzzling aspect of The Marriage of Maria Braun is the marriage itself, which begins, significantly, with an explosion of gunfire, presumably by Allied forces. As we discover the woman of the title, we grow increasingly confused by what she has seen in her husband, Hermann Braun (Klaus Löwitsch), and why, after only one night of true marriage, she still so strongly loves and supports him throughout the film. After that one blissful night, Braun is forced into the German military and is believed dead, until one day, as Maria is about to bed her major customer (and father of the baby in her womb), a Black soldier named Bill, Hermann shows up, having been released from prison.
Nearly speechless by what he has witnessed, Hermann lashes out against Maria—whom we have already discovered, despite her sexual activities, has been a loyal wife—she assuring him of her innocence and her love by promptly knocking her American over his head, killing him. Unable to bear the proceedings of her trial, Hermann confesses to having killed the soldier himself, and is promptly returned to prison.
Maria, leaving her crowded family home, sets out by herself to make a success, with the hope of building a home and financial future for her husband when he is again released. The attentive viewer already perceives that she is doomed to succeed, for Maria, a brilliantly capable woman, has learned the art of seducing men in order to control them—most often, surprisingly, for their own betterment. Trapped on a train in second-class, Maria pushes her way into first class where only one individual sits, a French industrialist, Karl Oswald (Ivan Desny).. Before they have reached their destination he has already fallen in love with her and made her his "personal assistant."
Despite the outcries of Oswald's unimaginative "bookkeeper," Senkenberg, Maria brokers a deal with an American companies for new machines, and Oswald's somewhat moribund company is suddenly in the position to become part of the economic miracle of Konrad Adenauer's post World War II's government (through the film we hear snippets of his speeches). One of the great joys of this movie is watching Maria as she gradually grows into the job, transforming herself both emotionally and physically into the capable and wealthy businesswoman she was determined to become. She has even predicted the changes of her own body and personality. Before Oswald can ask her into his bed, she determines, as she later tells him, to have an affair with him.

In short, necessary to her very survival, that is not only how Maria succeeds in her course of action. For despite her open sexuality and obvious intelligence, she is still utterly in love with her husband of the past, visiting him in prison regularly each week, and working with a lawyer for his release.
What we gradually began to perceive is that Maria's success—and by extension post-War Germany's success—is intrinsically tied sentimentally to the past. While outwardly they completely abandon the old world, accepting with gleeful greed and desire its new materialism, the German people are deeply tied to older relationships such as those of Frau and Ehemann, husband and wife, managers and labor, etc. It is not so much "love" that ties them to the past, but the rites themselves, the positioning of the themselves in the society. For Maria, however, that role is tolerable only as long as she is in control, is the one on whom the house and finances are dependent. She has purchased a kind of mini-mansion for the day when her husband will return and she will be able to live out the "romance."
It is that split her personality, the ability to move forward while linking herself to the myths of the German past, that makes Maria so attractive. We have only to consider her sister Betti's inability to encompass those necessary changes to understand why her husband, Willi, returned also from the front, can no longer stand the sight of her. Unlike Maria, she cannot intellectually alter her life; she is only the Frau, now growing fat. Even their mother (Gisela Uhlen) is more sexually and intellectually adventuresome, her greed for life being revealed even in the early scenes of the movie. As she says, early on:

Mother: It's wrong to give all you love to only one person, Grandpa. If you
don't have potatoes, you eat turnips. When the turnips are gone,
you eat gruel. But every girl loves her one and only. He goes to
war; five months later he's dead; and you mourn the rest of your
life. Does that make sense to you, Grandpa? It drowns you.

What Maria does not know is that Oswald, frustrated by her refusal to marry him—which would certainly mean a release of that control and a rejection of certain deeply held beliefs from the past—has discovered her marriage, and made an agreement with Hermann that, if released from jail, he will travel to Canada, leaving Maria to Oswald for the brief time he has left before his death.
In some ways, The Marriage of Maria Braun gives us the template for a character like Petra van Kant. Had Maria lived, she might certainly have been a kind of independent neurotic, like Petra, who has given up on men. But Hermann's return with his revelation that he is now financially able to support her, usurps her power at the very moment that she is told, through Oswald's lawyers, that she will inherit money; however he has given its control over to Hermann. She has been merely a pawn in trade between the two men.
Intentionally or accidentally, depending upon how one wants to evaluate her anger, her fury at the discovery of the truth, Maria leaves the pilot-light on her stove upon lighting up a cigarette. The explosion, when it comes, is inevitable and seems to me to have been destined; we have already witnessed several scenes of her dissolution as a caring being. Only if she had broken from all ties to the old German society, might she have survived. But sentimentality, an idea of behavior, tears her and her world apart. Yet Fassbinder's film, ironically, ends with a false sense of achievement rather than failure, as the German soccer team of 1954 beats Hungry, winning the World Cup Soccer Match for the first time. Out of the ashes of people like Maria Braun and her husband, a new country has risen.