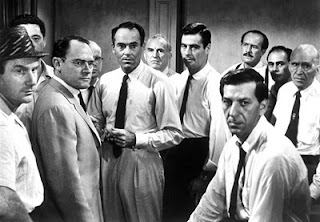 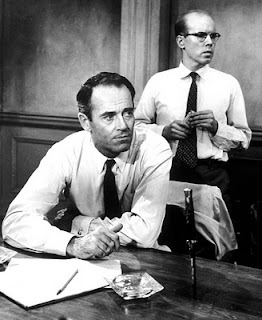 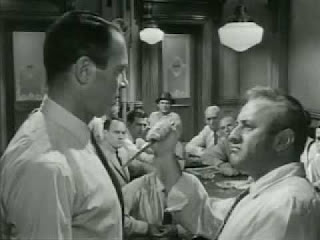 A tired and disinterested judge gives the jury his final summation, and they are locked away in the concrete box called the jury room. It is a hot and humid day, about to rain, and the fan does not seem to work; the windows are difficult to lift. The twelve men about to sit down to decide the fate of a young teenage boy are, as the title suggests, all angry—except perhaps for three or four who gradually reveal more temperate personalities.


Director Sidney Lument shoots these early scenes from high above, with the camera looking down on these seemingly insignificant beings. Gradually, as they begin to discuss the case, the camera joins them, closing in upon their faces until the audience is made to feel the claustrophobic atmosphere of this intense space.


As anyone who has seen this melodramatic and creaky confection knows, the men begin their deliberations by discovering that all but one of them is convinced of the defendant's guilt. Only Juror #8 (a role brilliantly downplayed in a kind of "aw shucks" manner by Henry Fonda) believes there is a reasonable doubt that the boy is innocent, and, gradually over the 96 minutes of this film, convinces the other jurors, one by one, to see it his way. As he admits several times, "I really don't know what the truth is."


The intent of Reginald Rose's teleplay transformed into screenplay, quite obviously, is to give credence to American jurisprudence, to demonstrate the importance in the process of the twelve jurors to reach a unanimous viewpoint before convicting a man. For me, however, the slow unmasking of Juror #8's eleven opponents is absolutely horrifying. What Rose's work reveals is just how strongly bigotry, personal jealousies, selfishness, fear, and just plain ignorance influence a jury's, any jury's, decisions. Certainly the fact that there is not a single man of color on this jury (white immigrant Juror #11, George Voskovec, substitutes) and no women represented may account for some of the open hostility expressed, particularly by Juror #10 (Ed Begley) and sadistic and failed father (Lee J. Cobb). The 1957 film seems to indicate, however, that even these kind of men, given the rational consensus-building of Juror #8, can be turned around or, at least, made temporarily to see their own mistakes. Yet one finds it hard to believe that this rather soft-spoken individual could sway the votes of some of these unreasonable beasts.
Today, given the radically divided and outspoken fractiousness of our society, it seems even more unlikely that one man or woman could affect a group in the manner that Henry Fonda does.


Perhaps that's why it is so important to have the protection of unanimity, but what it suggests is that, whatever the outcome of the process, true justice is a nearly impossible thing to accomplish, particularly given, in this instance, Fonda's concession after the first round of discussions to go along with the others if there is not another one among them who will change his vote. Certainly Juror #8 would not have been permitted to explore his own investigation by locally buying a knife similar to the one that killed the boy's father, and he would never today be allowed to bring it into court. I fear, moreover that, in reality, some jurors might join with the majority, as does Juror #7 (Jack Warden), simply to escape the process and get to a beloved baseball game or other event.


Yet we do know that some people having served jury duty describe the experience as uplifting and even spiritually moving, and believe that the men and women with whom they served tried as best they could to make a fair and just decision. Perhaps Americans are not as truly divisive and inwardly angry as writers and the media portray them.


If so, it seems even stranger that 12 Angry Men—which I recently revisited on the television screen—is so routinely touted as an American classic, a work chosen, for example, for preservation in the United States National Film Registry as being "culturally, historically, or aesthetically significant." Rose's depiction of the jury process is a fairly mannered expression of a series of different viewpoints, as well, as I've argued, as representing a frightening vision of the American common man, unless we see Fonda as the only paragon. And, if so, who are all those other men filled with such anger, even hate? Why is it that today more Americans are in jail than almost any other country in the world? Maybe the accused might be better served by the admission, as in some cultures, that no group can truly be unanimous when it comes to innocence or guilt.