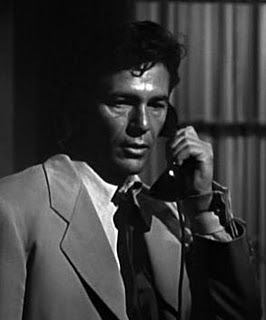 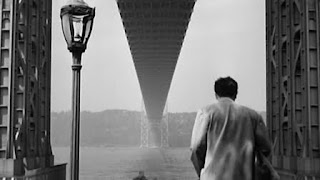 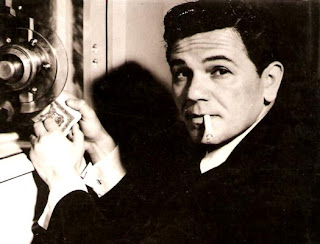 DESCENT INTO HELL
by Douglas Messerli

During a weekend I was to have been in New York—a trip cancelled because of heavy snow—I watched Abraham Polansky’s acclaimed film of 1948, Force of Evil. Unlike Andrew Sarris and some British critics, I do not feel that this film is one of the “great films of the modern American cinema.” But the movie does have a powerful film-noir quality and a brilliant performance by John Garfield which nearly matches his work in Body and Soul (which Polansky also wrote) and Marlon Brando’s edgy and touching portrayal of Terry Malloy in Elia Kazan’s On the Waterfront. I guess I’m reminded of Kazan’s film because each of these movies has as a subtheme: the corruption of one brother by another. But as opposed to On the Waterfront’s betrayal of a younger, more sensitive brother by the older sibling (portrayed by Rod Steiger), Force of Evil—in a more complex twist of events—concerns itself with a younger brother who, engaged in a high echelon of a gangster world, attempts to protect his elder brother, a petty crook who runs a small-time numbers business out of a private apartment.
In order to save his brother Joe Mason (Garfield) has Leo’s business raided by the police; but the raid itself is enough to rouse the elder Mason’s conscience, and he threatens to leave the business, along with at least two of his employees who have suddenly realized just how entwined they have become with evil forces. In the perverted world to which they have become pawns, however, the crime is not in the “taking,” but in the “not taking,” and that is, as the movie puts it, what makes them truly guilty. Refusing to “live and be guilty” in the old manner, they are given no choice but to become more deeply involved in the gangster world from which they seek to escape.
It is this illogical but inevitable descent into hell that makes this movie so mesmerizing. Once Mason/Garfield has set things into motion, there is no possible escape for either his brother or for his loyal secretary, with whom the younger Mason now establishes a swaggering macho relationship. Employees betray bosses; warring mob leaders join forces in the inverted world where paranoia is necessary for survival. Polansky and novelist Ira Wolfert’s almost incantory dialogue and voice-overs create a three-sentence rhythm of sophistic logic:

People can be made to talk. Who was my phone talking to?
A man can spend the rest of his life trying to remember what
he said.

Or, as Leo later says: “I’m a man with heart trouble. I die every day. It’s a stupid way to live.” In such a world Leo’s murder is inevitable; all the brother has done to protect him has only assured that he will be tossed upon the pollution-ridden river bank like “a piece of meat.”
In a world where everyone is listening in to the most private of conversations, Joe is forced to open his own locked away telephone to the voices of the mobsters as they spin, like spiders, new plots to enmesh anyone who is willing to see their own petty crimes as “not so bad.” As Leo, shortly before his death, comes to realize, even the pettiest of criminal acts permit the most perverse atrocities.
Los Angeles, December 7, 2003
Copyright (c) 2010 by International Cinema Review and Douglas Messerli
Posted by greenintegerblog at 7:51 AM