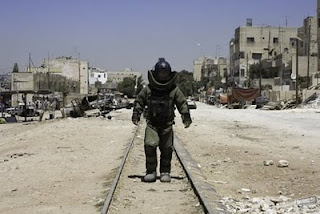 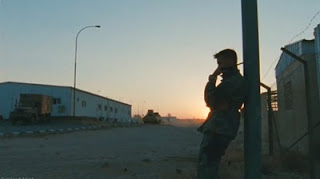 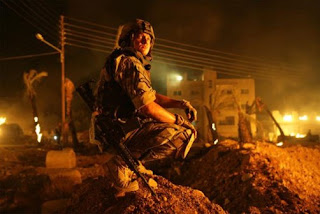 TRYING NOT TO LOVE
by Douglas Messerli

The Hurt Locker is really only a series of situations, dramatically portrayed, in which three men must diffuse bombs while warding off other possible dangers. One scene finds them situated as sitting targets in the middle of the desert, but the other events are centered in hostile urban streets, where at any corner or from any roof top the enemy might lurk. The simplicity of this work, accordingly, demands that the actors work together to create psychological portraits of their characters, for without that the audience would have little on which to focus. Fortunately for director Kathryn Bigelow, Jeremy Renner as SSG William James, Anthony Mackie as Sgt. JT Sanborn, and Brian Geraghty as Spc. Owen Eldridge interact brilliantly, creating a kind of depth in the film that does not exist in the script.
Of particular interest is Renner's character, a war addict, who seems to know no fear. His recklessness at first frustrates the other two team members, but gradually, as he defuses a car bomb outside the UN mission and later, with Sanborn, shoots and kills their dessert assailants, the men give him grudging respect.
Yet there is something deeper and darker about SSG William James that even he does not comprehend. He is, as one officer calls him, "a wild man," a man careless with his life. Questioned by his Colonel, James admits to having disarmed eight hundred and seventy-three bombs. Yet, unlike JT Sanborn, James is not prepared to die, but determined to live. The opposite of the philosopher whose name he carries, William James does not have the ability to philosophize or psychologize, is unable to look inward and comprehend his own being.

Sergeant JT Sanborn: But you realize every time you suit up, every time we go out, it's life or death. You roll the dice, and you deal with it. You recognize that don't you?
Staff Sergeant William James: Yea... Yea, I do. But I don't know why. [sighs]
Staff Sergeant William James: I don't know, JT. You know why I'm that way?
Sergeant JT Sanborn: No, I don't.

Married and blessed with a son, James has virtually abandoned his family, describing his own situation as a marriage that broke up, although his wife still lives in his house. A call to his wife shows him hanging up before she answers. The reviewer of the London Times lamented that we never do find out why James cannot find satisfaction in his home life. However, I think we do get some insights into "why he is that way."
Some scenes portray him as a kind of mad man: in one incident we see him lying in bed dressed in his body armor. Yet, of all the soldiers, he seems the only one willing to talk and joke with a young Iraqi boy, nicknamed Beckham, at one point even playing a quick game of soccer with him. Later, a macho barrack game, in which Sanborn and James give and take stomach blows, turns into a somewhat homoerotic roughhousing as James straddles a furious Sanborn, riding him like a bucking bronco.

On another mission soon after the men are called to a warehouse, where James discovers what he believes to be the body of Beckham, an undetonated bomb buried within his chest. This brutality so upsets him that he undergoes what one might describe as a breakdown: against military rules, James forces a man for who the boy worked outside the American encampment to take him to Beckham's home. There he encounters an Iraqi professor who, thinking him a CIA officer, invites him to sit. Confused, Williams turns to leave, encountering the wife who beats him about the head as he escapes. Reentry into the camp is difficult, as he is stopped and searched.
Another illegal foray with his buddies, leads to an attempted kidnapping of Eldridge, which James foils by shooting the Iraqis—while crippling Eldridge as well.
In a later scene Beckham seems to reappear, and cannot understand why James will not greet him. Is the child a stand-in or the real boy, whom James has confused with another? My theater companion insisted that if you looked closely, the second boy was not Beckham. But, in some ways, it does not matter. James has come to realize again that it is dangerous to love.

What we gradually begin to comprehend is that James not only keeps a "hurt locker"—a container holding the picture of his son and all the fuses he has disarmed—but is, himself, metaphorically speaking, a human hurt locker, a man trying desperately to keep from exploding. Inside, he is a being pulled in many directions, both spiritually and sexually. While he is clearly a potentially loving person, in his attempts to contain it, maybe even closet it, he is dangerous as well.
From the beginning, the film has counted down the days remaining before these men can return home, and after that day finally arrives, we see James at home with us wife and son. We might imagine a hopeful ending. But James in civilian life is truly a fish out of water, a man unable to chose even a box of cereal from the endless choices on the grocery shelves. His wife assigns him tasks that a mother might give to a child, such as cutting up the vegetables while she prepares their dinner. In the bedroom, Williams plays with his delighted baby, opening and closing a jack-in-the-box. More to himself than to the child, he describes his situation:

Staff Sergeant William James: [Speaking to his son] You love playing with that. You love playing with all your stuffed animals. You love your Mommy, your Daddy. You love your pajamas. You love everything, don't ya? Yea. But you know what, buddy? As you get older... some of the things you love might not seem so special anymore. Like your Jack-in-the-Box. Maybe you'll realize it's just a piece of tin and a stuffed animal. And then you forget the few things you really love. And by the time you get to my age, maybe it's only one or two things. With me, I think it's one.

We might imagine that the "one" he still loves is his son, but in the next scene, as he arrives at a new base, beginning the countdown of 365 days all over again, we realize the only thing he loves is the danger of his life, the possibility of dying or living hour by hour. In the world which he inhabits—a world where no one can truly be safe—choosing anyone to love not only endangers the loved one, but, like Pandora's opening of the box, may further release the pain into the world surrounding. And in that sense, perhaps, we understand that Staff Sergeant William James cannot be killed, for he is already a walking ghost.